Women’s tennis suffers dry spell over weekend in the desert 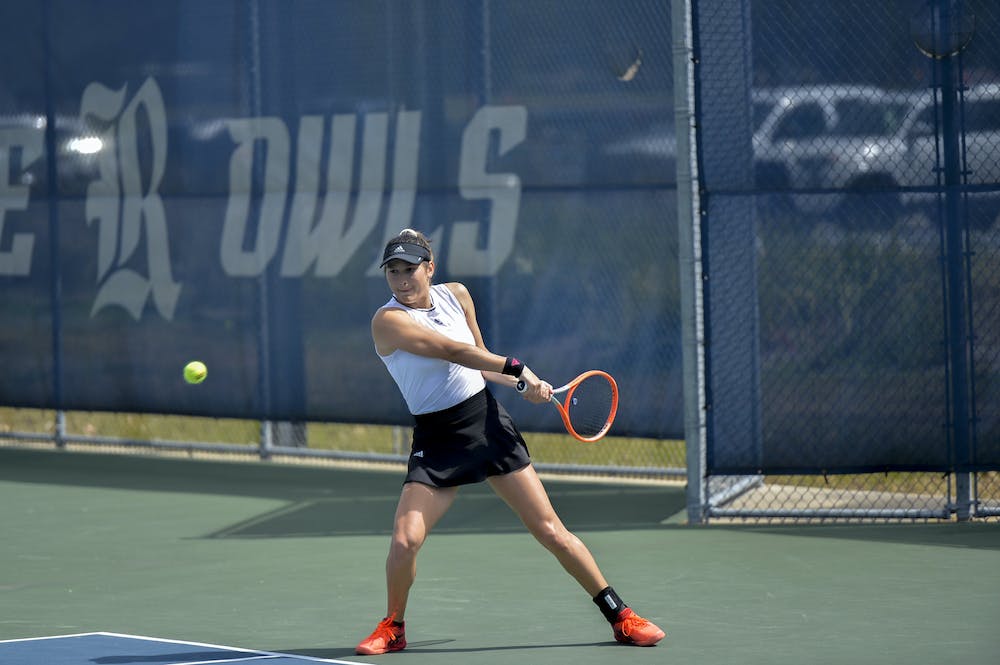 The No. 49 Rice women’s tennis team could not pull off two upsets during their west coast trip, losing to No. 48 University of Arizona 4-3 and No. 32 Arizona State University 4-0 last weekend. According to junior Maria Budin, while the results were not what she and the team wanted, learning from this road trip can move the team forward.

“It’s always tough to come out on the losing end of a couple of close matches this weekend,” Budin said. “We all need to take confidence from how close we were in all our matches this weekend, probably without our best level. The margins are small, and if we focus on the things we need to improve, we will be in a good place for more tough matches to come.”

Senior Anna Bowtell got the first singles point with a 2-0 victory. Junior Maria Budin rallied to salvage another singles point, but it was not enough as Arizona took the other four singles matches, giving them a 4-3 match victory. According to head coach Elizabeth Schmidt, losing after getting out to an early lead was tough for the team.

“We started off well with a solid doubles point and getting the quick point from [Bowtell,]” Schmidt said. “As scores show, it was a tight battle on the other five courts with lots of lead changes and momentum swings for both teams. Definitely a tough one to lose but now our focus is getting back up, learning from this match, and putting it all out there again tomorrow.”

The next day, the Owls were up against the Sun Devils, who were coming off of three consecutive losses on the road. The Sun Devils returned to their home court by taking the match’s first point as they won two of the three doubles matches. According to Schmidt, she has been pleased with how her doubles teams have been playing as of late despite the loss.

The Sun Devils never looked back as they won three straight singles matches to give them the match 4-0 over the Owls. According to Budin, the team found some positives to take away from the weekend despite getting swept.

“I think we can all be proud of what we gave and how we adapted to the new, hot conditions,” Budin said. “We definitely proved we have the level to be competing with quality teams. We have to keep focused on the positives and keep building from here.”

With just four regular season matches remaining, the Owls will look to build off these two matches against ranked opponents as they gear up for another road trip this weekend. According to Schmidt, she hopes that through practices and matches like these, her team will be able to reach consistent form as they enter the latter stage of their season.

“I believe that if we continue to push ourselves in practice and put it on the line time and time again in each match that solid play will become even more consistent from set to set and match to match,” Schmidt said. “The college tennis season is a marathon, not a sprint, and each mile under our belt helps prepare us for the final kick of conference and [the] NCAAs.”

The Owls will travel to Tampa, Florida, where they will take on the University of South Florida on Friday at 11 a.m and Florida International University the following day.