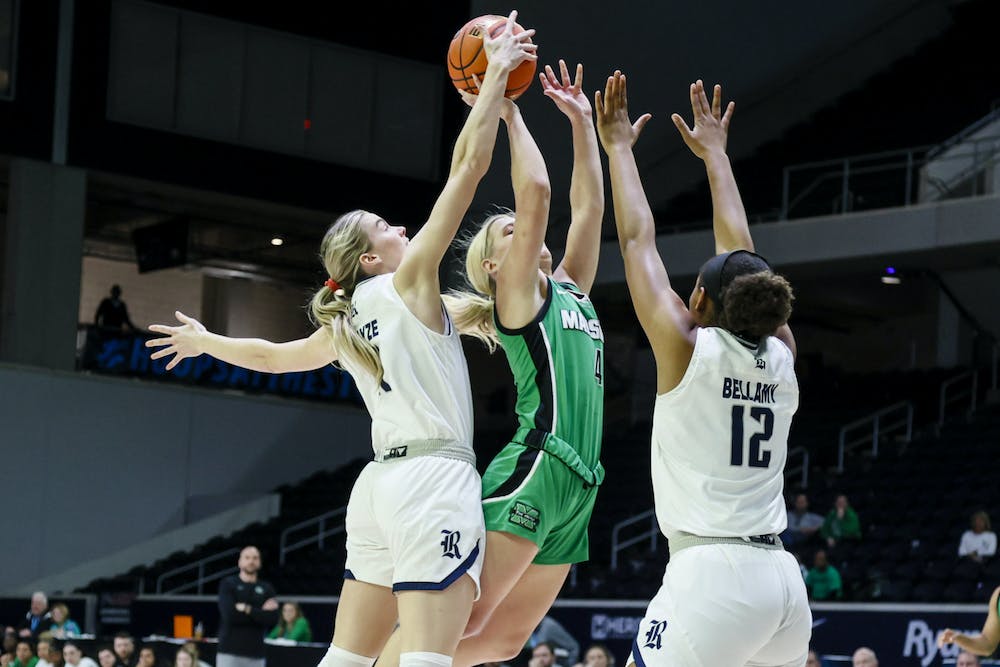 The Rice women's basketball team arrived in Frisco, TX with a bang, defeating Marshall University by a score of 80-62 in their opening match of the Conference USA tournament. In a rematch of the January contest where the Owls fell to the Thundering Herd at home, the roles reversed with Rice coming out on top, giving them their seventh win in the last eight games. Rice now moves on to tomorrow’s quarterfinal against the University of North Carolina, Charlotte. Following the game, head coach Lindsay Edmonds said that the win showed how much her team has grown this season.

“I’m so proud of these young ladies,” Edmonds said. “We adopted a mindset of ‘win the day’ about a month ago and ever since we took on that mentality I feel like the players have really bought into that and it has gotten our momentum going. They are fighters and they battle [every game]. I'm really pleased to come out and perform the way we did today.”

The Owls took the lead early, in a high-scoring first quarter, led by sophomore second-team all-conference forward Ashlee Austin who scored seven of her team-high 19 points in the first period. The strong offensive showing continued as the game progressed and Austin was joined by four other Owls in double figures. As a team, the Owls shot 47 percent from the field and their 80 points were the most points scored by an Owls team in C-USA tournament history. According to Edmonds, the hot offensive performance indicated the high level that the Owls are playing at right now.

“We’re definitely playing our best basketball,” Edmonds said. “We had five of us scoring in double figures. [We] scored 80 points, which is a Rice C-USA tournament record. I really like where we are at and where we can go.”

In the second quarter, the Owls defense took center stage, holding the Thundering Herd to eight points. The Owls held Marshall to 37 percent shooting on the game and outrebounded the Herd 43-26. Edmonds said that the Owls have started to find their rhythm on both sides of the court.

“The proof is in our record,” Edmonds said. “We’re clicking offensively and defensively. We’ve thrown a lot of [strategies] at them over the season trying to figure out what works. I think we've figured out what [is working] and we're going to stick with it.”

Going into the fourth quarter, the Owls held a 16 point lead, but instead of allowing Marshall to comeback, like they had in their previous matchup, the Owls had their highest scoring quarter, putting up 23 in the last ten minutes. Despite the team’s youth, according to Edmonds, the experience over the season and the new mentality is creating the confidence that her team needs to win down the stretch.

“Early in the season we were just inexperienced, myself included,” Edmonds said. “I feel like the more games we got under our belts, the more confidence we got, and the more we were able to execute down the stretch. The experience we’ve gotten along the season is tremendous. We’ve had a lot of close games so we learned how to close those out. Early on, I’m not sure that we knew that we could finish out games. But at the end of the day the ‘win the day’ mentality was a big change for our season.”

Part of the success on both ends of the floor was the performance from freshman forward Malia Fisher. Fisher recorded her eighth double-double on the season with 17 points and 16 rebounds. But according to Fisher, she is not worried about the stats, and is just enjoying competing with her team in her first conference tournament.

“You just go out there and play,” Fisher said. “I’m not worried about the numbers. A win is a win and I’m excited to be here and winning with this team. Being in the gym and spending time at the hotel with my teammates is definitely an amazing experience.”

The Owls look to continue their hot streak in the quarterfinals where they will face off against Charlotte, the No. 1 seed in the east division. The last time the two teams met back in January, Rice fell in four-overtimes, making it the longest game in program history. Edmonds is looking forward to the matchup and said that the first-round win will give them confidence going in as the underdog.

“Being able to have a convincing win today just gives us even more confidence on what we’re trying to do while we’re here,” Edmonds said. “I love to win. Any chance you get to win a basketball game is pretty awesome. We’re definitely playing our best basketball and I wouldn’t want to be here with anybody else.”

The quarterfinal matchup against Charlotte is Thursday at 11 a.m. CST. It will be streamed on Stadium.