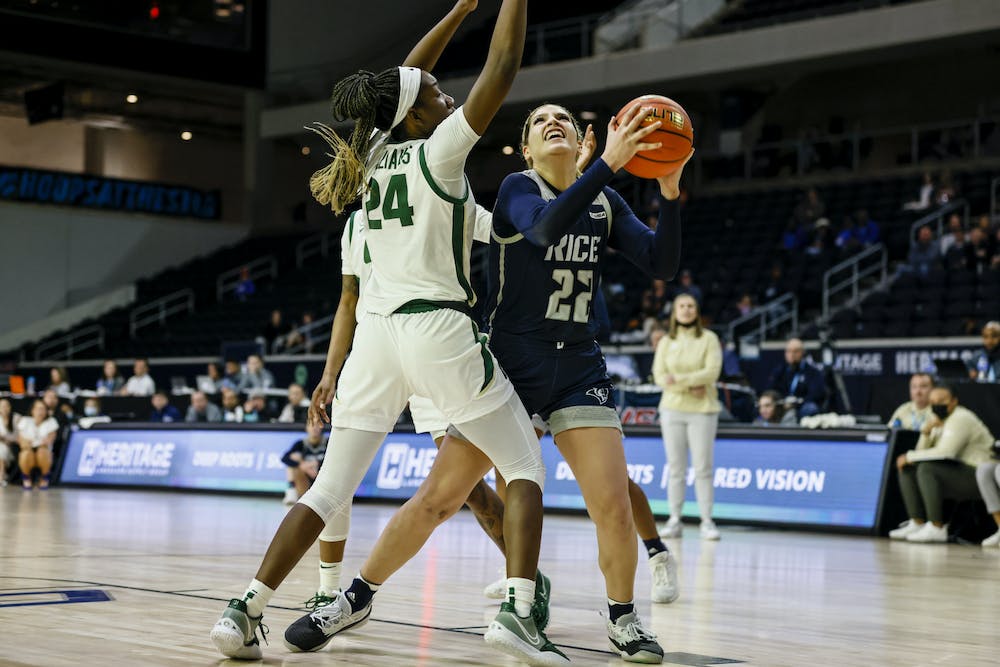 The hot conference streak came to an end for the Rice women's basketball team on Thursday afternoon when they lost to the east division’s No. 1 seed University of North Carolina at Charlotte in the second round of the Conference USA tournament. Coming off of an 18 point victory over Marshall University, the Owls gave the 49ers a scare throughout their quarterfinal matchup, but in the end, the Owls fell short 59-53.

Head coach Lindsay Edmonds echoed the same message she has given following a number of recent games: how proud she is of the way that her team fights every second of the game.

“I’m really proud of this group – just their fight, their toughness, their effort,” Edmonds said. “Obviously this game didn’t go the way we wanted it to go but we competed. There were times in this game when we could have hung our heads but we didn't because that's not who we are. We could've done a few things a little bit better and maybe the outcome would be different but I am so proud of their heart, their toughness and their effort.”

Rice opened up the game in a similar fashion to their victory against Marshall in the first round with a blazing offensive start, going on a 15-3 run in the last six minutes of the quarter to take a 17-9 lead.Freshman phenom Malia Fisher was a big part of the offensive success contributing eight of her 12 points in the opening period. Sophomore guard Destiny Jackson led the team in scoring with 14 points along with six rebounds and four assists, while sophomore forward Ashlee Austin chipped in 13 points of her own.

After a back and forth, low scoring second quarter, the Owls went into the half with a 3 point lead. The second half was a completely different story than the first, with the 49ers taking control and extending their lead over the Owls to eight by the late third quarter. In the fourth, the Owls made a late comeback, taking back the lead with six minutes left in the game, but were unable to hold that lead for long. With under three minutes remaining and the game tied, Charlotte went on a 4-0 run to take control with a minute left. A couple of turnovers by the Owls combined with the 49ers hitting free throws sealed the game, and the Owls found themselves on the losing end as the final buzzer rang. Regardless of the score, Edmonds said she was  proud of the way her team fought back from a late deficit and made the top seed work for their win.

“There were a couple times we could have let it get out of hand and get away [from us] but we found ways to fight and claw at it and get back in it and make it a ballgame,” Edmonds said. We made a run to make it a game [but] a couple things didn’t go our way toward the end. We had some crucial turnovers that hurt us down the stretch. We had some tough shots that didn't go in. Charlotte’s a great basketball team and we just unfortunately came up a little bit short today.”

One of the factors that has been plaguing the Owls during the season was the lack of depth, especially with injuries taking out important role players. The Owls consistently played with just an eight person rotation, and only seven players saw the court in their loss to Charlotte. According to Edmonds, the fatigue, compounded with the short turnaround leading up to today’s matchup, played a role in the outcome of the game.

“We played yesterday and with a short bench, we had to play a lot of minutes and Charlotte got to sit,” Edmonds said. “That's the advantage of getting that double bye. Down the stretch they were able to execute on a few things better than we were.”

One of the themes in the weeks leading up to the tournament was how the Owls were able to turn around their season after a slow start ending with a hot win streak. Edmonds said that one positive to take away was how the team got to where they were with all the difficulties they have faced.

“We overcame a lot of adversity this season,” Edmonds said. “It's been tough but if you would've told me that we [had the number one seed on the ropes with a few minutes left in the game] a month ago, I would've said ‘okay great.’ I would’ve liked to see [the game] go the other way but I like how we're playing.”

Even though the conference tournament is over for Rice, that does not mean the season is over. The Owls now hope to earn a bid for a postseason invitational tournament. Last year, the Owls earned a bid to the Women’s National Invitational Tournament and defeated numerous Power 5 programs to take home the WNIT title. This year, Edmonds said that she is hopeful that the team will get a chance to continue their season.

“I told the team afterwards I don’t want the season to be over yet and that their mindset should still be locked in on basketball,” Edmonds said. “They deserve to be able to continue to play the way we [finished the season]. The WNIT was there watching us this weekend and I had a great conversation with them. Now it's about getting them the postseason they deserve. I like our chances.”