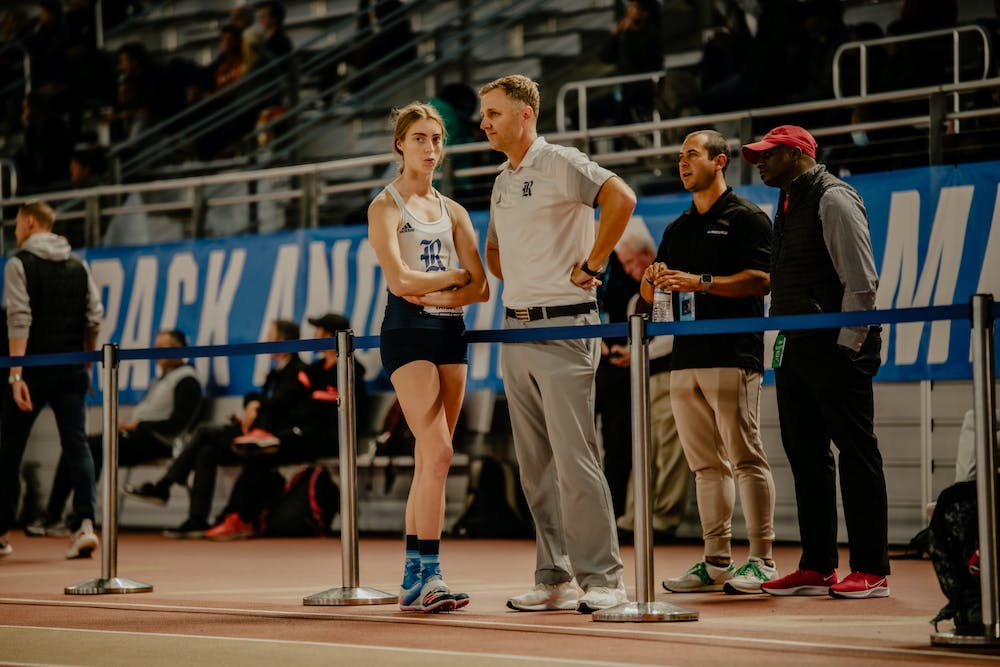 Freshman jumper Josie Taylor followed up her record-breaking high jump in last month’s Conference USA championships with an eighth place finish at last weekend’s NCAA championships, earning her first-team All-American honors. Meanwhile, sophomore thrower Tara Simpson Sullivan, the only other Owl competing in Birmingham, placed No. 14 in the weight throw to receive second-team All-American honors. According to head coach Jim Bevan, both athletes represented themselves and their school well at the sport’s highest level.

“I thought both Tara and Josie gave a great accounting of themselves on the highest stage for an indoor track and field athlete,” Bevan said.

Simpson-Sullivan kicked off the meet for the Owls, entering Friday’s weight throw as the No. 16 seed in a 16 athlete field. While she fell short of her season-best 22.15 meters, a mark that would have earned her tenth place over the weekend, Simpson-Sullivan still outperformed her seeding by two spots with her throw of 21.05 meters. According to Simpson-Sullivan, her seeding took some pressure off of her and let her outperform her original ranking.

“I actually felt fairly relaxed compared to other meets,” Simpson Sullivan said. “I knew going in I was seeded 16th out of 16 and so I really had nothing to lose.”

Taylor followed up Simpson-Sullivan’s performance with her eighth-place finish the following day. Taylor cleared the 1.78 meter bar in one attempt, but didn’t make it over the bar when it was raised to 1.83 meters. Texas A&M University’s Lamara Distin won the event with a mark of 1.92 meters, just .06 meters higher than Taylor’s season high of 1.86, which would have been good enough to tie for third place. Taylor’s mark also ranked second among freshmen in the event, and was tops among true-freshmen. According to Taylor, while she would have liked to place higher, she was still happy with her result.

“I had an absolute blast at nationals, the level across the field was unlike any I've ever competed in before,“ Taylor said. “Although my jumping on the day was not quite what I was after, I was stoked to be there and come away with eighth, a great way to finish the season, and I'm fired up for the upcoming outdoor season.”

According to Bevan, both Taylor and Simpson-Sullivan’s accomplishments are even more impressive considering that they’re still underclassmen.

“To qualify is a great accomplishment [on its own],” Bevan said. “Tara was the second youngest person [in her event] and Josie was one of only [a few] freshmen here. The future is bright for both of them as this was the first time for both Tara and Josie to compete at the indoor national meet and I can tell you from past history that there is nothing like the experience that you gain from this unique, high intensity [and high] quality meet.”