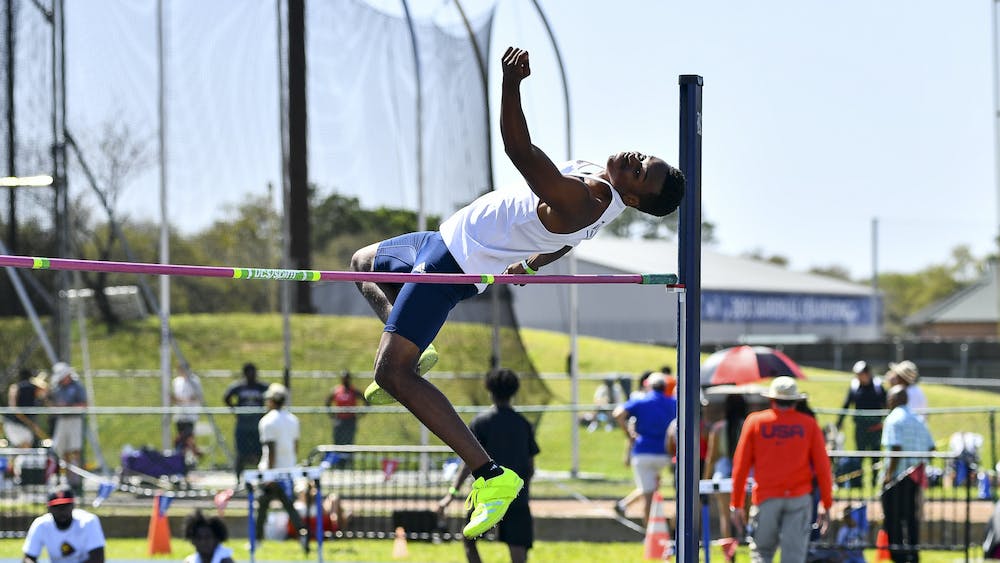 Athletes from nine colleges and over 25 high schools took over the Ley Track at Holloway Field over the weekend, as the Victor Lopez Classic returned to campus after a two year hiatus. The event, which was the first hosted by Rice this season, started on Thursday afternoon and ran nearly all day Friday and Saturday. According to Jim Bevan, head coach of the women’s team, it was great to race in front of a home crowd.

“It was nice to have a big meet again,” Bevan said. “It’s been three years since we had this Victor Lopez Classic which goes back almost 40 years. And in the city of Houston it’s one of the premier meets. Depending on the weekend, it can be the premier meet in the country. It’s nice to get back to normal because this is a highlight for all of us.”

Thursday’s events were reserved for the high school competition, so the meet kicked off for the Owls the following day. Friday was highlighted by three golds for the Owls. Senior distance runner Lourdes Vivas de Lorenzi was the only Owl to take first place on the women’s side on Friday when she won the 5,000 meter race. On the men’s side, sophomore thrower Shaun Kerry took first in the hammer throw with a mark of 59.95 meters, and senior Andrew Abikhaled took the gold in the steeplechase with the fifth best time in school history. Men’s head coach Jon Warren said he was very impressed with Abikhaled’s personal best time.

“[Abikhaled’s] 8:51 was exceptional,” Warren said. “That time is really, really good, he’ll get to the first round of nationals.”

Six more Owls won golds on Saturday, including five in field events. On the women’s team, sophomore vaulter Elena Siemens won the pole vault, sophomore jumper Ginnie Okafor won the triple jump and junior jumper KC Nwadei won the high jump. For the men’s team, sophomore jumper Ese Amata won the high jump, and sophomore thrower Elhian Amar won the shot put. The Owls’ only track individual gold on the day came from senior distance runner Alex Topini. In addition, the women’s 4x100 relay team took first place. After the day, Warren said that, while none of Saturday’s results jumped out at him like Abikhaled’s win had, he was happy with nearly his entire team’s performance on the day.

While this year’s meet was smaller than in past years, Warren still said that it is likely among the ten biggest meets in the country, when the high school competition is factored in as well. According to Bevan, the meet took a lot of work to host, and it took a massive effort from both the athletic department and students around campus to make everything run smoothly.

“It’s a lot of hard work,” Bevan said. “A lot of people stepped up in the department and around campus. We’d like to give a shout out to the Rice ultimate frisbee club who helped us out with a lot of hard work, as well as our athletes. Just putting it on is a big act.”

However, Bevan said that hosting the meet was worth the extra effort, since it gives his athletes the rare opportunity to compete in front of their friends and family.

“It’s always wonderful to run at home in front of a home crowd and their peers,” Bevan said. “A lot of the girls on the team had peers who were there watching them, and you don’t have that enough in track. We only have two home meets a year, so it’s nice to have their peers here watching them excel at what they practice and do for hours at a time every week.”

The meet wasn’t as big as it has been in the past, according to Bevan, because the Texas Relays at the University of Texas, Austin happened to be the same week. A handful of Owls even made the trip two and a half hours west, with junior thrower Erna Gunnarsdóttir taking second in the shot put with a throw of 17.29 meters, the fourth best mark in the NCAA this season at the time. Upon hearing about Gunnarsdóttir’s personal best mark, Bevan was taken aback.

After the indoor season ended in early March, both teams are now two weeks into the outdoor season. Both teams will have until mid-May to prepare for the Conference USA championships. According to Warren, this early in the season, he is more concerned with  his athletes’ progress than he is with their placement.

“What we’re really looking for this time of year is [finding] good races, good competition and [getting] good marks,” Warren said. “I’d rather have, take [Topini] for example. I’d rather have him run 3:43 and get eighth than 3:49 and win. Now, when we get to the championship portion … then it’s about placing.”