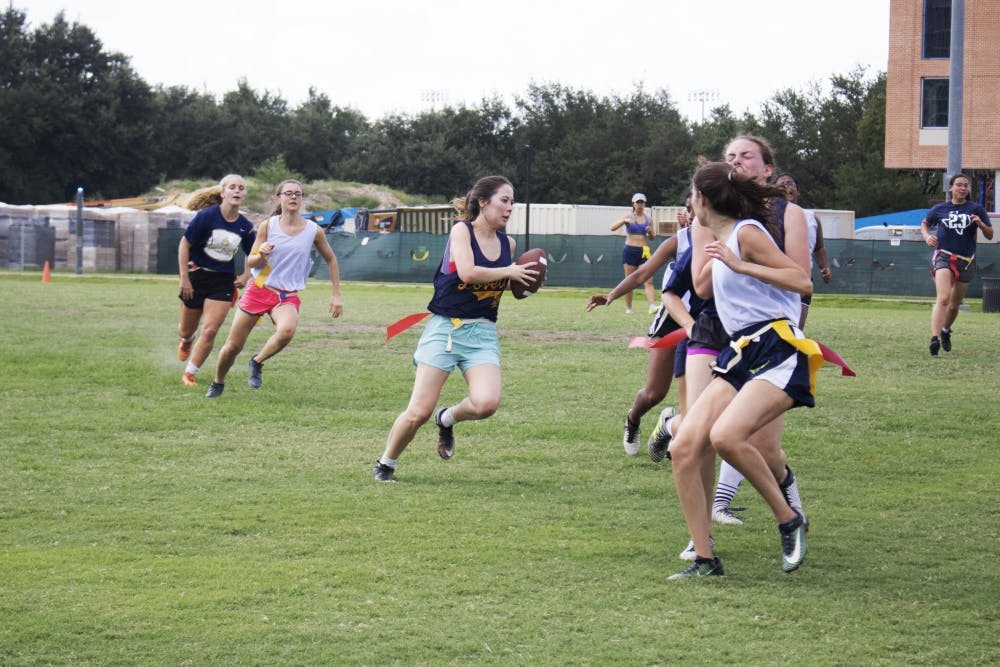 After months of delays, the powderpuff season finally kicked off, with the first slate of games being played this past weekend. While the start to the 2021-2022 women’s flag football season had been scheduled to start in late February, it was pushed back once again before finally taking place over the weekend. Even though the season has now started, some teams still haven’t played a game, and all teams are still awaiting a full schedule. The exact source of the delays — whether they lie with the Club Sports office or with the powderpuff student coordinators — is unclear.

As of Feb. 15, powderpuff was slated to begin games that following week. However, according to Harry Golen, a Jones College junior and powderpuff coach, games were scheduled, rescheduled, and ultimately not counted for points in the season.

“Last week we were scheduled for a game on Sunday … and I got a text Friday morning that [the game] wouldn’t count,” Golen said. “The players are just really disappointed … [and] I have no idea why the season hasn’t started.”

Jacob Koelsch, a Will Rice College senior and powderpuff coach, said that the Club Sports office bears the brunt of the responsibility for the delay.

“Games typically take place in the fall, but because of issues stemming from new accounting software, the season was moved into the spring,” Koelsch said. “Frankly it seems that Chris Watkins and Cara Caspersen from Club Sports have left the students to deal with everything themselves. [Watkins and Caspersen] are highly unmotivated and unresponsive — sometimes taking two-plus weeks to answer emails — and I’ve had several seasons ruined by their inaction.”

Chris Watkins, the assistant director for competitive sports at the Recreation and Wellness Center, spoke on powderpuff’s registration status.

According to Jonathan Lloyd, a Will Rice junior and powderpuff coach, it hasn’t just been the recreation center staff that has played a role in the delays. Lloyd said that inaction on the part of powderpuff coordinators has set back the season, and he’s not sure if the season will be able to go on as planned.

“The responsibility of organizing this season has been placed on the coordinators, and specifically Isaac Goforth [one of the three coordinators for this year’s powderpuff season],” Lloyd said. “I worry that this delay in registering the club may push back the season further. I hope that [club sports] does not see this as a reason to delay our games to the point that we do not even have time for a full season, let alone an abbreviated playoff.”

However, according to Goforth, powderpuff is registered as a student club, and the issues registering as a club sport stem from missteps on the part of the competitive sports staff.

Koelsch said that changes need to be made to ensure more successful seasons in future years.

“Taking care of staffing and scheduling should be one of the first things that occur each season, well before the start rather than a week prior,” Koelsch said. “Club sports admin needs to take on a more involved role rather than blindly pushing the duty to student managers who have to juggle more stringent schedules. We, as students, pay too much to the Rice recreation department to be receiving such a poor product, but the issues start at the top. I feel it is well past time to make a serious review of whether Chris and Cara at Club Sports fulfill their obligations to the students.”

But according to Watkins, the help provided to student-led programs is only given to those who are properly registered with Club Sports, and powderpuff did not re-register after their 2019 season.

“The purpose of the Club Sports Program is to ensure that official student-led activity groups with a special interest in recreation and sports who have registered with our program receive adequate mentorship, financial assistance, and facility access in order to be a success,” Watkins said. “The Powderpuff Football Club let their registration with Club Sports lapse in 2019, and in spite of several attempts on our part to prompt re-engagement, have never reapplied to our program.”