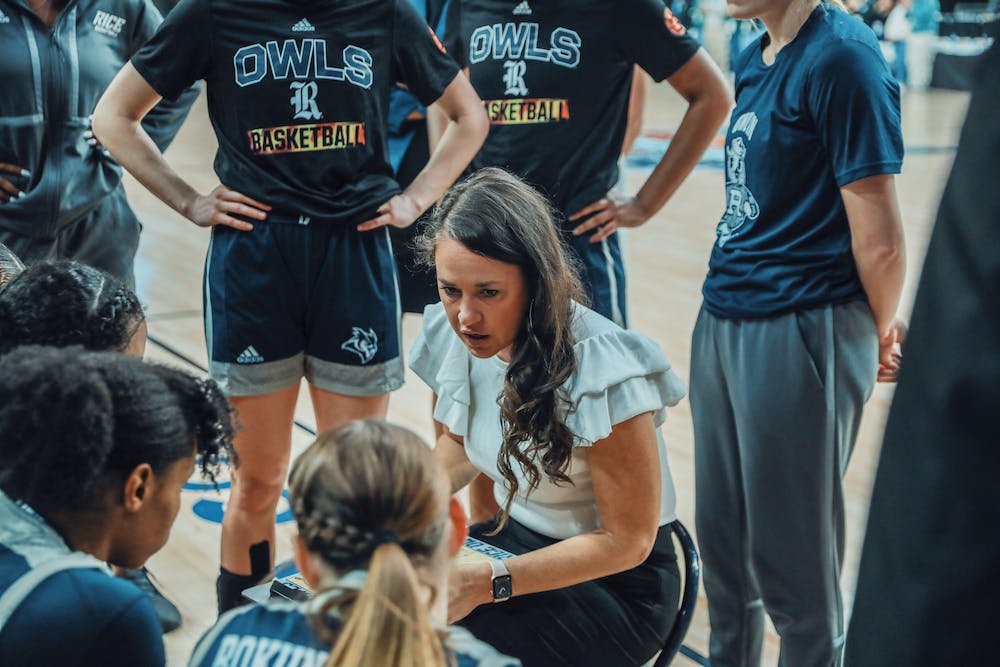 One year ago this week, the Rice women’s basketball team beat the University of Mississippi by 13 points to win the Women’s National Invitational Tournament. That team, of course, looked very different from the team that ended their season two Fridays ago with a loss to the University of North Carolina at Charlotte in the quarterfinal of the Conference USA tournament. Following their WNIT win, head coach Tina Langley was poached by the University of Washington, and four of the team’s five starters transferred to schools in bigger conferences. What was left was a roster that returned only one senior and three upperclassmen, under the guidance of a first-time head coach.

Yet a year later, it seems as though the nearly impossible has happened – the Owls look like they’re nearly back to being one of the top teams in the conference. In just a year under head coach Lindsay Edmonds, a former North Carolina State University assistant who helped the Wolfpack become perennial contenders, the Owls have rebuilt much of what they lost when Langley and nearly her whole lineup left.

Their brief spell in the conference tournament all but proved that. In their first game, the Owls, seeded fourth in the C-USA west division, topped Marshall University, the fifth seed in the east, by 18 points. While the Owls lost their next game against Charlotte, they led the top-seeded 49ers by as many as nine points late in the first half and went into the locker room with a three point lead. Even as their seven-player rotation ran out of steam in the closing minutes of their second game in as many days, the Owls stayed within two points of the 49ers until the game’s final 30 seconds.

The narrow loss to the eventual conference champions, after blowing out Marshall, made the Owls look a lot closer to the conference’s best teams than to its middle class. That conclusion is pretty stunning, considering the lack of experience on their roster going into the season, the injury troubles they faced all year and the fact that they were winless in their first five conference games, including four double-digit losses.

But since that initial losing streak, the Owls won nine of 13 going into the tournament. They won six of their last seven regular season games – with the one loss coming in double overtime – including wins by a combined 58 points in their final two games. That record reflects incredibly well on the coaching staff; the longer Edmonds and her staff had to work with the team, the better they got. And they did all this despite losing two starters to injury early in the year, limiting them to a seven or eight player rotation, depending on the game. That is nothing short of remarkable.

Normally, I’d be tempted to say that their late season surge was a fluke. Ten games is a small sample size after all, and some of their wins weren’t particularly convincing. But the Owls’ improvement over the course of the year was so consistent that it suggests otherwise. Even during their losing streak, the margin that the team lost by decreased in every game. After losing to Middle Tennessee State University by 24 points in their conference opener, the Owls lost their next games by 17, 13 and 10 points, before a quadruple-overtime loss. Given their inexperience going into the season, and how steadily they improved over the course of the year, it seems far more likely that it was sustainable growth than luck.

That turnaround was the result of stellar player development from Edmonds and her staff. When Langley and four of her starters left following last season, the roster was decimated. With just a single player on the roster who had more than two career starts under her belt prior to this season, it seemed that even with a good hire, the Owls would be years away from returning to their previous heights. The abysmal start to the season seemed to prove that the team was still years away from seriously competing; if they couldn’t beat a single conference opponent, they couldn’t even begin to think about competing for conference titles. But Edmonds and her staff helped coax career years out of unheard players to power the Owls’ turnaround.

Sophomore forward Ashlee Austin led the Owls with 16.5 points per game, despite scoring just 60 total points in her two seasons under Langley. Sophomore guard Destiny Jackson put up more assists this season than any Owl has since 2016-17, after spending two years as a backup under Langley. By the end of the season,  three freshmen were starting regularly, including forward Malia Fisher, who was the Owls’ second leading scorer. Edmonds’s ability to get the most out of young talent bodes very well for the program going forward.

The team should pick up right where they left off next season. They return nearly every player, and what was a relatively young roster this season will be full of experience next year. If the team continues to improve at even close to the same pace that it has so far under Edmonds, they’ll be competing for conference championships in no time. Let’s just hope that head-coach-needy power-five teams aren’t taking notice.