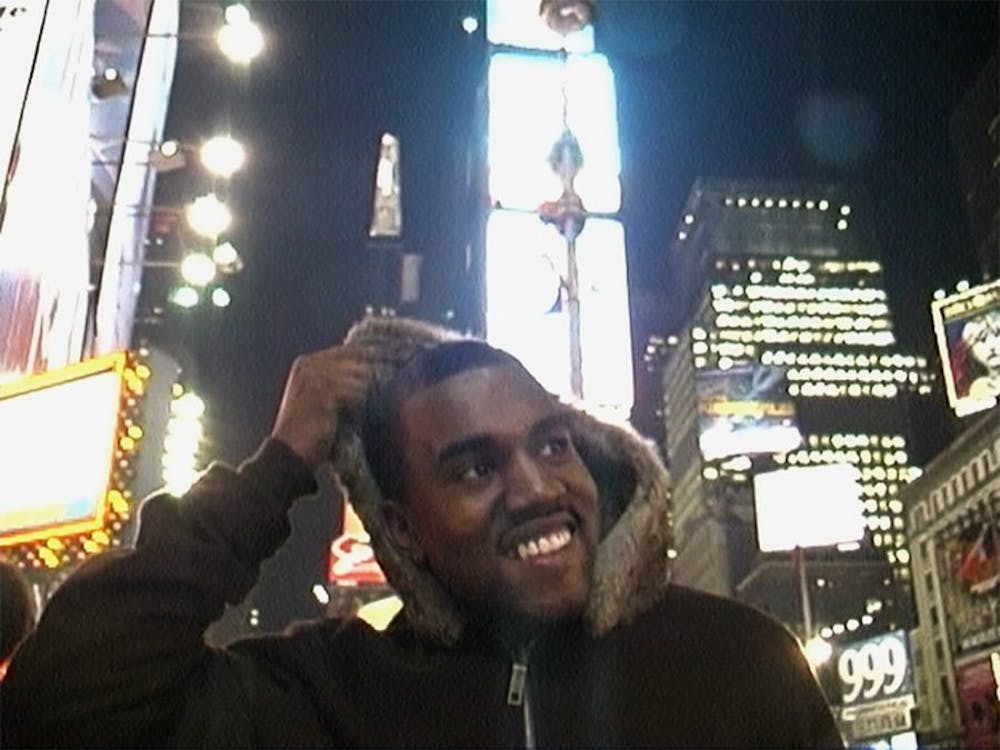 It’s hard to know exactly where to begin when writing about Kanye West.  As one of the few artists who has maintained relevance for nearly the entirety of the 21st century, capturing his every album, design, and controversy is no easy feat. Despite this challenge, “Jeen-Yuhs: A Kanye Trilogy” is a testament to West’s success and artistry over the last two decades, dissecting his drive and creative process to reveal a constantly working, ever-changing figure. By chronicling Kanye’s rise as an artist, directors Chike Ozah and Coodie Simmons manage to portray his complexity while creating parallels to their own lives and giving hip-hop fans an engaging look behind the scenes.

“Jeen-Yuhs” is a three-part documentary series, with each ninety-minute part exploring a period of Kanye’s career. “Act i: VISION” begins the series by exploring Kanye’s early success as a producer in New York’s thriving early-2000s hip-hop scene. Using a wealth of archival footage captured by Simmons, West’s creative process is put on full display, demonstrating how hip-hop classics like “All Falls Down” and “Jesus Walks” were created. This footage also provides insight into the local Chicago scene that informed West’s earlier work and communicates how his desire to create something representative of himself has been with him since the beginning. For hip-hop fans, these elements are undeniably intriguing, though I am unsure if people who dislike the music and the personalities surrounding it will be engaged. Despite this, however, part one does a great job of portraying West’s motivation to overcome the label of “producer” and ascend to hip-hop icon status. Even if you don’t enjoy this style of music, there’s an undeniable and infectious passion in the artist’s freestyle rhymes and records.

“Act ii: PURPOSE” doubles down on examining Kanye’s process by providing a look at the creation of his first album, “The College Dropout”. The second part is a direct continuation of the first one, as Kanye’s journey to overcome the “producer” label remains the focus, and his relationship with his mother Donda is further emphasized. As someone who considers “The College Dropout” one of West’s strongest musical efforts, this part was consistently entertaining, as it gave insight into the events surrounding the album’s release and showed how Kanye’s contemporaries reacted to his then-groundbreaking sound.

However, this part is even more inaccessible than the last to non-hip-hop fans, as it assumes the viewer understands the significance of Kanye’s interactions with his mom. Regardless of the lack of context, the second part is still my favorite of the series, communicating West’s drive to create something great by giving audiences a look into the studio sessions that formed the artist’s classic sound.

The final act of the documentary is the longest and messiest part of the documentary. “Act iii: AWAKENING” serves as a recounting of a variety of events that have happened to Kanye since the release of “The College Dropout”. The segment begins by describing how West slowly distanced himself from Simmons, as the two began to collaborate less as Kanye rose to fame. As such, the amount of archival footage begins to lessen. Instead, Simmons and Ozah use segments from televised programs and interviews to fill in what happened to West from 2008 to 2019.

However, in 2019, Simmons returns to West’s world and films the creation of three of his most recent albums: “Kids See Ghosts”, “Jesus is King”, and “Donda”. The third part acknowledges the many controversies that Kanye generated and contextualizes these events as a part of Kanye’s creative process. Rather than praising or condemning what Kanye has done in the past, the documentary presents Kanye’s changing and conflicting opinions as representations of his own internal struggles which are then funneled into his work.

However, the documentary fails to connect all the dots and deliver an overarching message about West’s career. Perhaps this is for the best, given the vast amount of material covered, but I wish the documentary focused more on Kanye’s recent creative endeavors instead of summarizing his entire career. Despite this, the editing and scoring of the footage are certainly impressive, and by the end of the whole series, I felt as though I understood Kanye’s process and how his behind-the-scenes self correlates to the image of him created by the media.

Ultimately, “Jeen-Yuhs” serves as an engaging documentary for hip-hop fans. The use of archival footage constructs a nuanced portrait of an artist always driven to create, although the motivation fans may find in West’s hustle may be lost on those who lack the necessary context. Despite this, I believe everyone should give this documentary a try if the subject matter sounds interesting, as the story found within is worth the watch — all 277 minutes of it.