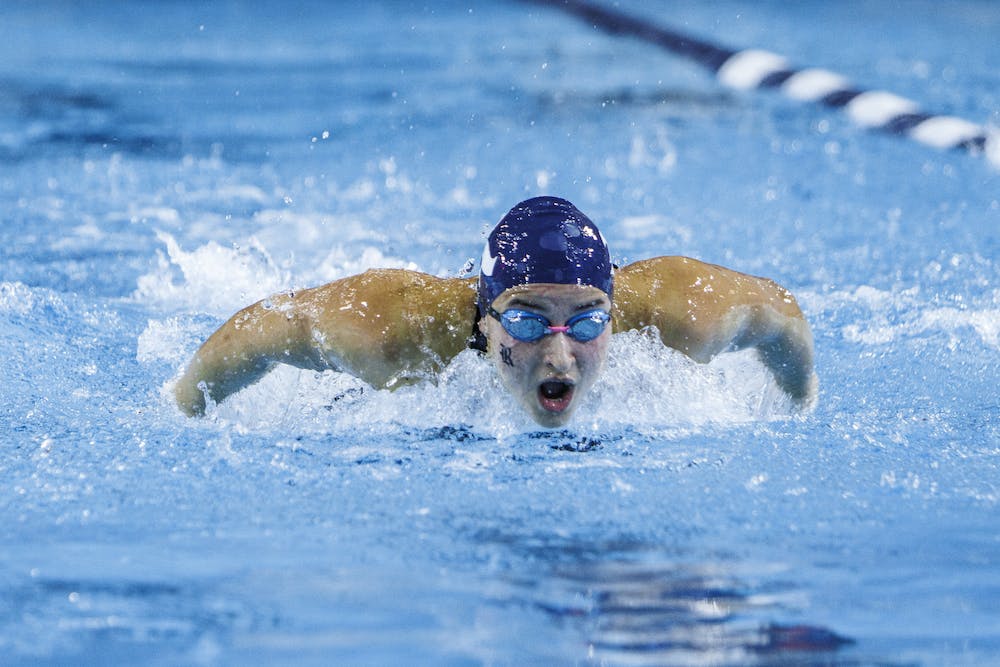 Last weekend, freshman Arielle Hayon capped off her memorable season over the weekend at the NCAA women’s swimming and diving championships. Hayon was the only Owl to make the trip to Atlanta, Georgia and made her NCAA debut in the 100 and 200-yard butterfly.

A freshman from Agora Hills, California, Hayon is no stranger to fast times in the pool. She made her collegiate debut at the Rice Fall Splash, a dual-meet against the University of Houston in October of 2021, where she won both the 100 and 200-yard fly while also reaching the podium in multiple relays. Over the course of her season, she tallied six individual wins in the freestyle and the butterfly. At the Conference USA championships, Hayon set a conference record in the 100-yard butterfly, and a school record in the 200-yard fly, hitting the “A cut” time in both events to punch her ticket to the NCAAs. Regardless of her success all season, Hayon said she did not expect to make it to the NCAA championships.

“I didn’t go into the season thinking [the] NCAAs was the end goal,” Hayon said. “When I was at a conference and swam 52 [seconds in the 100-fly] in the prelims, I realized it was a possibility. And later, I swam a 51 in finals and I was really excited because I realized I was going to go to [the NCAAs].”

On the first day of individual prelims, Hayon competed in the 100-yard fly where she finished No. 36 overall with a time of 52.57. Hayon’s 100-fly heat included the reigning Olympic gold medalist Maggie MacNeil, who also holds the American record for the 100-fly. Hayon said that at first it was daunting to compete against the best athletes in the sport but she stuck to her game plan and executed.

“I got to meet a lot of swimmers on other teams and compete against swimmers at a really high level,” Hayon said. “I thought I was going to be really intimidated swimming against the best in the country but I really tried to not think about it and swim my own race. Part of me felt a little bit of imposter syndrome like I don’t belong here, but the other part of me knows I do belong here and there’s a reason I am here. If you can swim at the [NCAAs], you can swim almost anywhere.”

Hayon returned to the pool to compete in the 200-yard fly and clocked a time of 1:57.44, good for No. 44. The time was not enough to advance her to the finals but it was the second fastest time she had ever recorded. Hayon said that she was happy with the way she competed and left it all out in the pool.

“After the warmdown, I got out of the pool … and threw up,” Hayon said. “At least I know I put everything into that race. But that’s the 200-fly, it’s a tough event. I went out a little more aggressively than I usually do in that event and I paid for it in the end. That was the fastest time I had ever done in prelims. After the race, I felt like there was stuff to clean up on, but I stuck to my race strategy really well. That’s something I can take into next season.”

The NCAA championships put a bow on the Hayons record-breaking first collegiate season, as she joined the 17 other Owls who have competed at the highest collegiate competition. Hayon said that she is already excited for what next season has to hold.

“In the past, I’ve finished seasons and really felt burnt out like I needed a break,” Hayon said. “But I finished this season and I don’t feel super exhausted or burnt out. I will take a break to reflect on the seasons and plan for next season but I’m really excited for next year.”

The NCAAs brought an end to Hayon’s season. The rest of the team wrapped up their season last week at the College Swimming and Diving Coaches Association of America National Invitational last week, where the Owls placed fifth.