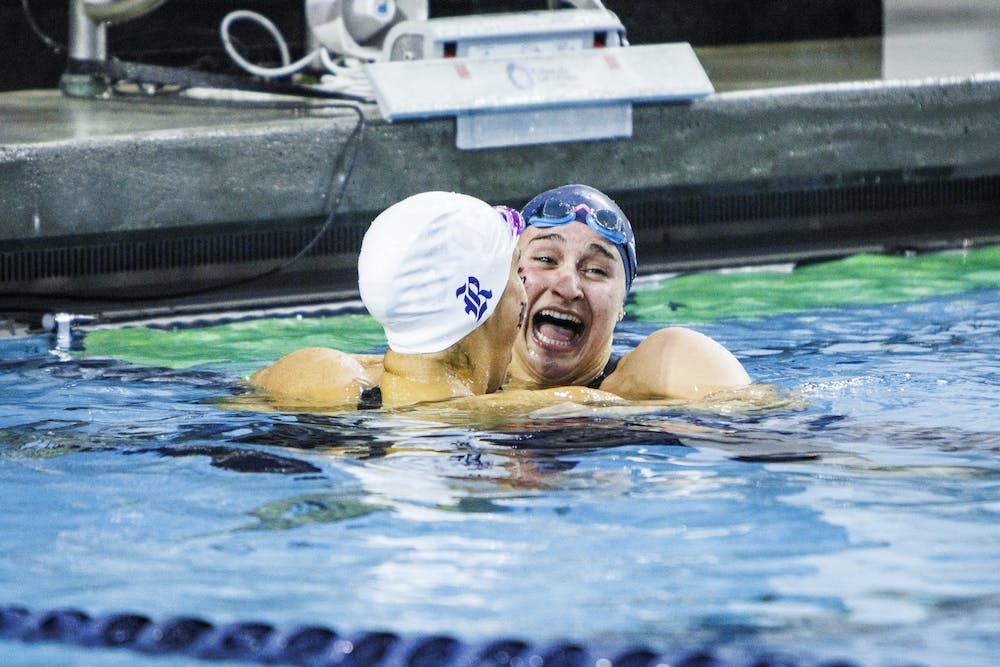 The Rice women’s swimming team took second place at the Conference USA championships last week behind Florida International University. In addition to the No. 2 finish, the Owls had several top performances throughout the competition, as their seven gold medals beat the previous program record of six from 2014. After the meet, head coach Seth Huston said he was proud of his team’s performance and their preparation for the event.

“The C-USA championships is where we try to bring everything we have been working on to fruition,” Huston said. “Our team atmosphere is incredible; our team really values and appreciates each other. In addition, this team has learned how to focus on being in the moment. They did a great job of minimizing distractions that debilitate performance. With six individual champions, I think it illustrates how competitive we were and how our swimmers were capitalizing on opportunities that were presented.”

Six individual Owls won gold, breaking the previous school record of four. The winners included juniors Shannon Campbell, Madison Howe, and Zoe Spitz along with freshmen Arielle Hayon and Amelia Kane and senior Marta Cano-Minarro. To cap off the record-breaking weekend in Lynchburg, the Owls set a school program record in the 400-yard freestyle relay, finishing the event in 3:18.95, on their way to a silver medal in the event. According to Hayon, the team executed their race strategies exactly as they had planned.

“The team was very encouraging and came into the meet super excited for every single race,” Hayon said. “We did a great job of sticking to our own race strategies and staying in our own lanes. Collectively, the team did not let the competition change our game plan. That was seen by the way we finished races.”

Hayon, who won gold in both the 100-butterfly and 200-butterfly, had a historic week during her first time participating in the C-USA championship. Hayon not only won gold twice but also broke a C-USA meet and Owls’ program record in the 100-butterfly with a time of 51.82 seconds. Hayon said she was very happy with her performance and that it only further motivated her to continue to perform well.

“I have not stopped smiling since and it makes me even hungrier for more to come,” Hayon said. “It was a really emotional win for me because I have so frequently let my nerves get the best of me and I finally felt like I had put on a performance that I was really excited about and happy to race.”

According to Hayon, the coaching staff has helped her make significant strides in her performance and her experience last week helped her become mentally confident for bigger races in the future.

“I have learned so much this year and Seth, [assistant coach] Jessica [Rodriguez], and [assistant coach] Hanna [Huston] have really helped me make huge improvements,” Hayon said. “This experience has taught me how to better mentally prepare for big competitions and it’s something I hope to do again through the end of the season. I’m really excited for what these next three seasons will bring and I’m excited to bring my freestyle up to par with my butterfly.”

Next up for the team is the CSCAA National Invitational from March 10 to March 12 in Indiana. The invitational tournament is the last for Rice before whoever qualifies will compete at the NCAA Championships from March 16 to March 19 in Atlanta.

According to Huston, the team’s next goals lie in their post-season tournament performance. He hopes to have a group that is ready to compete and make the necessary improvements from the conference championship.

“We compete at the National Invitational championships and Arielle will swim at NCAA Championships,” Huston said. “Competing in the postseason is an opportunity to see who is best prepared and who is willing to step up and compete. I think we will have [the] group very ready to go.

Hayon, who will be competing at the national championships, is aiming to improve her execution of technique and does not want the level of competition to affect her racing abilities.

“I want to continue to execute my races and fine-tune the details, despite the setting,” Hayon said. “As the competition grows towards the end of the season, a goal of mine is to stay focused on me and not let stiffer competition change my confidence or race plan. I do not like to be time or results-focused but rather focused on the plan.”