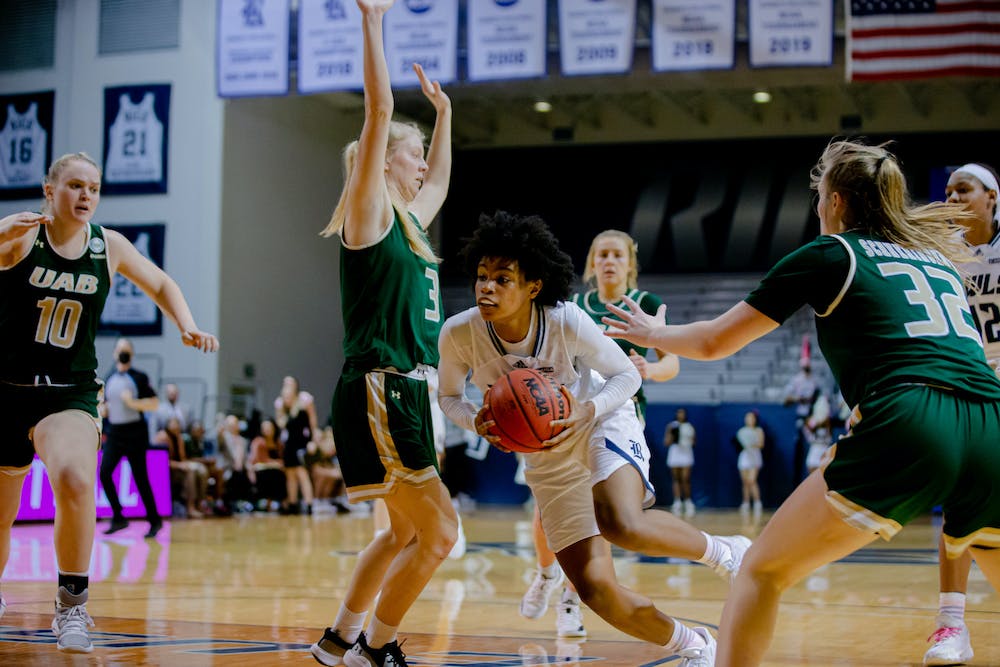 The Rice women’s basketball team picked up their first conference play weekend-sweep by defeating the University of Alabama at Birmingham and Florida International University. Both games saw the Owls in a neck-and-neck contest to the very end, something that has troubled the team so far this season. However, according to head coach Lindsay Edmonds, closing games has been a point of emphasis, and she was proud to see her team pull through in both games.

“We have been really trying to focus on and practice doing some situation stuff at the end of every practice, and I think we’re learning by now that a lot of our games are going to come down to the wire and we have to be better in those moments, myself included,” Edmonds said. “So the situations and practice help me figure out what I want to call, who I want to run it for, what we want to do defensively, like what works best for us. We’ve grown a lot together and I’m just really really proud of them and happy that they were able to get rewarded for their hard work.”

The Owls’ first game during the homestand saw them in a shootout against the Blazers. The Owls got off to a flying start thanks in large part to freshman guard Maya Bokunewicz, who scored 17 of her 19 points in the first half, to go along with her career-high eight rebounds. According to Bokunewicz, having the game come to her offensively and playing with pace have helped her settle into the system.

“I think just coming in as a freshman off of an injury last year, [it] took me a little time to settle in and to play with the pace of the game and kind of let the game come to me offensively,” Bokunewicz said. “I’ve definitely slowed down and gotten into a rhythm with the game and been able to read how players are guarding me better.”

While Bokunewicz did much of the scoring for the Owls, who found themselves a point ahead at halftime, it was sophomore forward Ashlee Austin who helped the Owls close the game in the second half. Austin chipped in 17 of her 22 points in the second half while going nine for 17 from the field.

Destiny Jackson also added career-highs of own with 17 points and nine assists, helping to ignite the Owls’ offense. Overall, the Owls offense was in full swing as they shot 49.2 percent on 61 shots, shot 58.3 percent from deep and matched a season low of 10 team turnovers. According to Bokunewicz, the way the Owls convincingly closed this game showed the team’s growth.

“I was telling them in the locker room [that] we were in a lot of these same kinds of positions that we were in today in prior games this season and we haven’t been able to close them out,” Bokunweicz said. “So I think practicing every day this week, and having a good practice preparing for this game, every little moment that we’ve had has really prepared us for the big moment in the game and we really closed it out, showed a lot of growth and maturity and knocked down some tough shots and sometimes that wins games, so I’m really proud of our group.”

Following their win against UAB, the Owls were positioned to come away with their first conference sweep of the season when the Panthers of FIU came to Tudor Fieldhouse on Saturday. The Owls got off to another fast start, outscoring the Panthers 14-7 in the first quarter while stifling the Panthers to the tune of only two made shots. However, the Owls’ offense sputtered in the second quarter, as FIU took a 28-25 lead going into halftime.

Once again, the Owls found themselves going down to the wire. However, like they did on Thursday night, the Owls took the lead in the third quarter and never looked back, largely due to their 31 for 36 shooting from the foul line.

The Owls were led by freshman forward Malia Fisher who had a team high 17 points to go along with her career-high 18 rebounds. Austin and Jackson contributed 16 and 14 points apiece. Following their win on Saturday, this marked the first conference play weekend-sweep of Edmonds’ tenure.

“I’m so proud of this team for everything we have accomplished this week,” Edmonds said. “We talk every day about winning each day and [the team] really locked in on that. We had another great total team effort. Putting together back to back conference wins for the first time this season is an awesome accomplishment and I’m so happy for our young ladies. Hopefully we just continue to build on this momentum.”

The Owls will now look to build upon this momentum as they go on the road to play Louisiana Tech University on Thursday and the University of Southern Mississippi on Saturday. According to Edmonds, the team is finally starting to put it together, as they head into the home-stretch of the season.

“I think the more games we play, the more confident they get, the better at execution they are, so I like our game plan, I like what we’ve been striving towards,” Edmonds said. “I just hope we continue to reap the benefits and close out this season the way we want to and the way I think we’re capable of.”