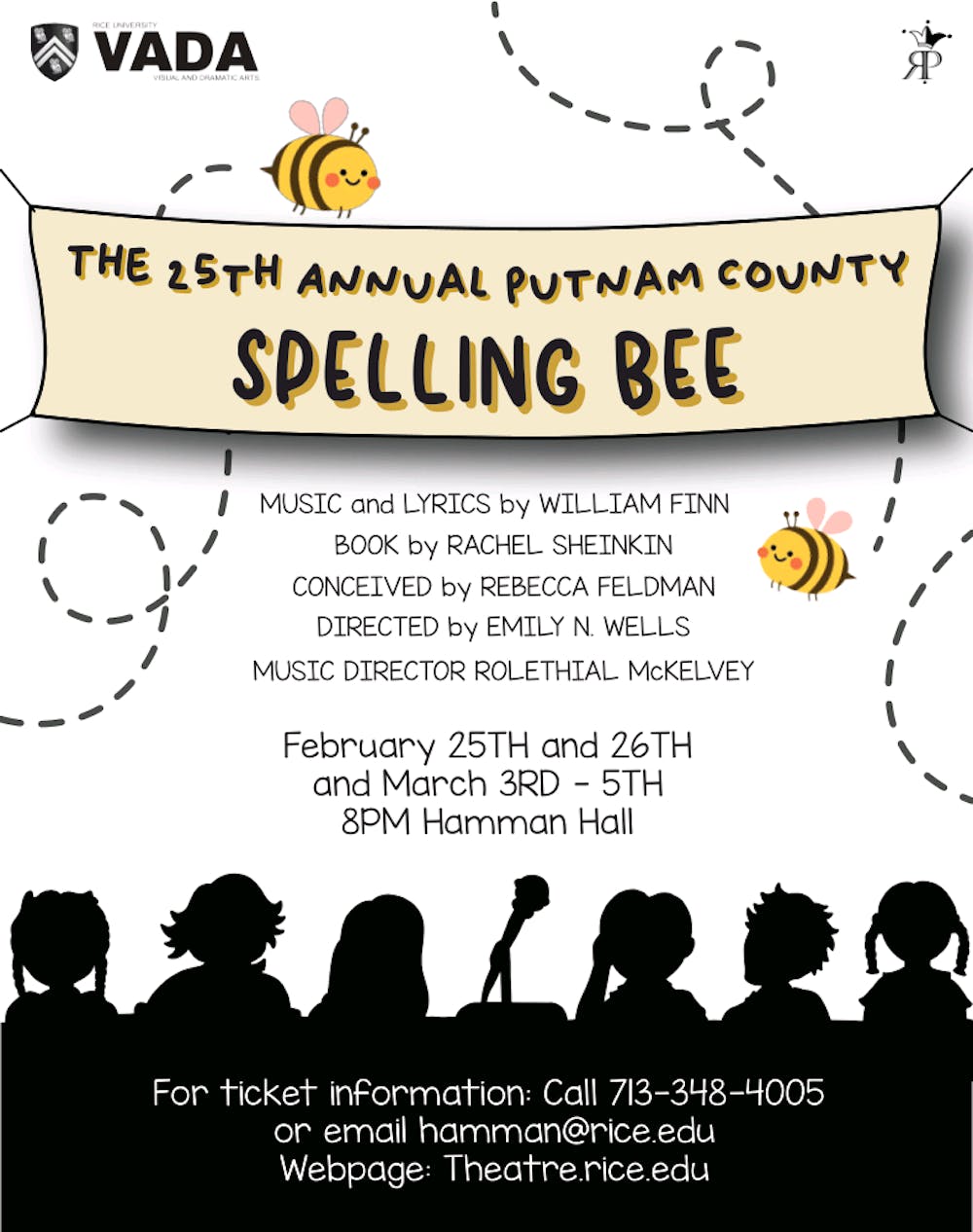 Rice’s Visual and Dramatic Arts department and student-run theatre company the Rice Players will stage a musical production of “The 25th Annual Putnam County Spelling Bee.” Described by Christina Keefe, the VADA producer of the production, as an “uplifting, fun, wacky production,” the show features student actors and crew members and the work of both professional and student designers. Performances are Feb. 25, 26 and March 3-5 at 8:00 p.m. in Hamman Hall. Student admission is free, and general admission is $10.

“The 25th Annual Putnam County Spelling Bee” is a musical comedy about six pre-adolescents and takes place over the course of one spelling bee, featuring flashbacks against the backdrop of a school gymnasium. Nick Harrison, the show’s lighting designer, said that  the stage lighting highlights the contrast between the ongoing competition in the gymnasium and the flashbacks experienced by each character.

“Every song accompanies a person, and every person has their own story,” Harrison, a Baker College freshman, said. “Colors are assigned to those characters when their stories come alive.”

Audience participation is a typical component of this show. Usually, three or four audience members are called up each night to take part in the bee. Matthew Alter, who plays Chip Tolentino, the winner of the previous year’s competition, has experience in improvisational theatre which is utilized in the show.

“It is so fun getting to interact with the audience and definitely changes the dynamic of the show,” said Alter, a Wiess College sophomore.

Taylor Stowers plays Olive Ostrovsky, a 10-year-old who struggles with her confidence throughout the show. Stowers, a Duncan College freshman, said that she has learned a lot throughout the rehearsal process for the show.

Alejandra Wagnon, the Rice Players producer of the show, said despite the show having comedic elements there’s also an emotional component.

“There’s a heavy emphasis on making these characters people rather than just caricatures,” Wagnon, a Wiess junior, said.

Despite facing multiple challenges due to the COVID-19 pandemic and delayed returns to school, the cast and crew of “The 25th Annual Putnam County Spelling Bee” were able to bring the production to life. From early rehearsals on Zoom to altering the way the cast traditionally interacts with audience members, those involved overcame obstacles to make this project possible in just six weeks.

“People really pulled together to support each other,” Keefe said. “If somebody is sick, somebody else jumps in … and everybody on stage helps them move through the space. It’s been a very positive and nurturing experience.”

Some students said that working on the show was a valuable learning opportunity.

“It’s been great to have a mix of student designers and professional theater workers,” Wagnon said.

Wagnon said that watching “The 25th Annual Putnam County Spelling Bee” is an opportunity for audience members to step away from academic and work responsibilities.

“The show will give audiences the chance to connect with their inner child and step away from the academic and social stressors that they might be feeling,” Wagnon said.