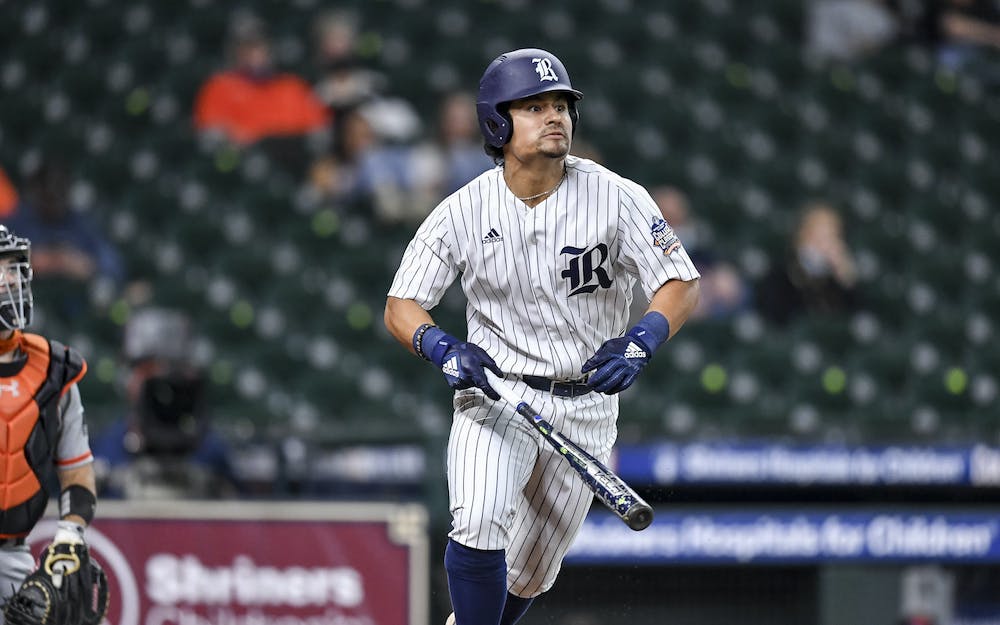 This past season, Shohei Ohtani of the Los Angeles Angels made waves across the baseball world by winning the American League MVP award as both a pitcher and a batter. Fifteen-hundred miles to the east, the Rice baseball team boasts a two-way player of its own in sophomore Guy Garibay Jr., who serves as both an outfielder and a pitcher.

The dual-threat presence that Garibay brings to the diamond for the Owls began early in his life, spurred by his father who has remained a fixture throughout his career.

“My father made me fall in love with the game at a young age,” Garibay said. “From the time I was able to pick up a bat to now, he has always been the person who has guided me through this game.”

After being introduced to the game by his father, Garibay continued to pursue the sport. According to Garibay, his love for the game grew, which further affirmed that baseball was the sport for him.

“I fell in love with baseball when I was in elementary [school], and the game shaped me to become the man I am today,” Garibay said. “I knew baseball was the sport for me when I started playing [in] little league. When I had a little league baseball game during the week, I could never focus during school because I was so excited to play against my childhood friends later on that day.”

As Garibay followed his baseball dreams, he began to become a prominent two-way high school player, throwing a no-hitter in his abbreviated senior season and hitting .430 during his junior season. According to Garibay, he made the jump to college ball with the help of his local club team.

“Growing up, baseball was my way out,” Garibay said. “I was fortunate enough to have played for a great organization based in Houston, called Marucci Elite Texas, that helped me get a scholarship to play baseball at Rice.”

Garibay continued to star as a two-way player last season for the Owls, leading the team with four saves while hitting .234 with six home runs and 26 RBIs as a freshman. According to Garibay, he did not envision himself continuing to play both sides of the field going into college.

“I’ve always enjoyed playing all positions, but hitting is my bread and butter,” Garibay said. “I was my high school team’s Friday night pitcher my junior and senior year, and I didn’t expect to continue pitching in college because there’s not many two-way players. But it was enjoyable to be able to do both as a freshman in college.”

Being close to home allows Garibay to see his childhood friends during his free time. According to Garibay, when he isn’t in the pen or field honing his craft, he enjoys taking advantage of his proximity to home by spending his leisure time with his friends.

“Rice is only 40 minutes away from home, so I can see my parents and best friends back home anytime I want,” Garibay said. “I enjoy playing Fortnite, ping pong, bowling and golfing with my best friends.”

Garibay doesn’t just enjoy traveling more than 40 minutes away. Garibay said that one of his main goals is to travel as much as possible.

“My goal outside of baseball is to see as much of the world as possible,” Garibay said.

With a year of experience under his belt, Garibay appears poised to continue his two-way duties under new head coach Jose Cruz Jr. Garibay will look to build on his first year when the Owls start their season this Friday.