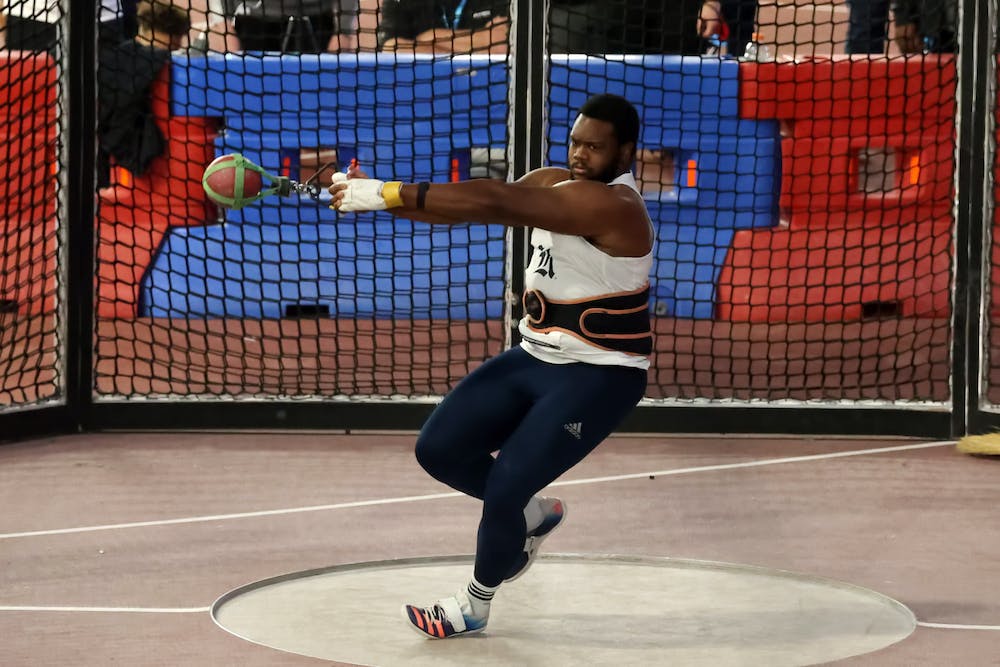 Three Owls took home gold medals as the Rice men’s track and field team placed fifth at the Conference USA championships in Birmingham, Alabama over the weekend. On Saturday, junior thrower Nick Hicks won his second straight conference title in the weight throw, while junior vaulter Natan Rivera took gold in the pole vault, edging out teammate Grant Levesque on a tiebreaker. Levesque would get a gold of his own the next day though, winning the heptathlon. According to head coach Jon Warren, while it’s tough to gauge the team’s progress during the short indoor season, he was happy with the results.

“It is always difficult to set expectations in a conference that is this diverse and this good,” Warren said. “We barely see each other during the short indoor season. That being said, we had hoped to be in the top half with a shot to be top three.  We ended up fifth with some really solid performances during the weekend.”

Going into the meet, Hicks was among the favorites in the event after winning last year. But according to Warren, his throw of 20.92 meters, which beat second place by over a meter and a half, still managed to exceed hs lofty expectations.

“Nick Hicks put up a dominating performance in the weight throw,” Warren said. “He would have won the event with every one of his legal throws.”

As for the pole vault, Rivera and Levesque each cleared the 5.04 meter bar, while no one else got higher than 4.89 meters. Both maxed out at the same height, but Rivera, who had also won the event in 2019, was given the gold because he was able to do so in fewer attempts. Warren said that both impressed him over the course of the weekend.

The only other Owl to earn an individual medal on Saturday was sophomore jumper Ese Amata in the high jump. The distance medley relay team added a silver as well, finishing just over two-tenths of a second behind Middle Tennessee State University’s team.

“I would like to give special attention to the heptathlon,” Warren said. “This was an event where the Owls went first, third, fourth and sixth. That is a great showing.”

Despite the strong individual performances, the showing wasn’t quite enough to put the Owls in the competition for the overall title. The team finished with 78 points, 77.5 behind runaway champions University of North Carolina at Charlotte, but only 16 points out of second place.

While those who qualify will compete at the NCAA championships on March 11 and 12, the bulk of the team will now turn their attention towards the outdoor season, which begins on Mar. 17. According to Warren, the team is excited to get some key athletes back who don’t compete in indoor events, and has a chance to be even better during the outdoor season.

“I think we are better built for the outdoor campaign than [the] indoor [one],” Warren said. “We are very excited about the outdoor season. We will add some events that we think will help [such as] javelin, discus, [and] steeplechase, get some key athletes back, for example All-American [senior] javelin thrower James McNaney and former C-USA pole vault champ [sophomore vaulter] Alexander Slinkman. The impressive multi event crew will be able to more easily do additional events [since] the indoor meet is 17 events over day days, the outdoor meet is 21 events over four days.”

Last season, McNaney and Hicks won individual conference titles, and McNaney was the sole member of the team to qualify for the NCAA outdoor championships. According to Warren, the team has a good chance to improve on those numbers this year.

“We hope to finish very high in the  conference standings,” Warren said. “We hope to qualify a large number of athletes to the NCAA postseason, have a few all Americans and to possibly garner a decent NCAA finish.”

The NCAA championships will also take place in Birmingham and will be broadcast across various ESPN networks.