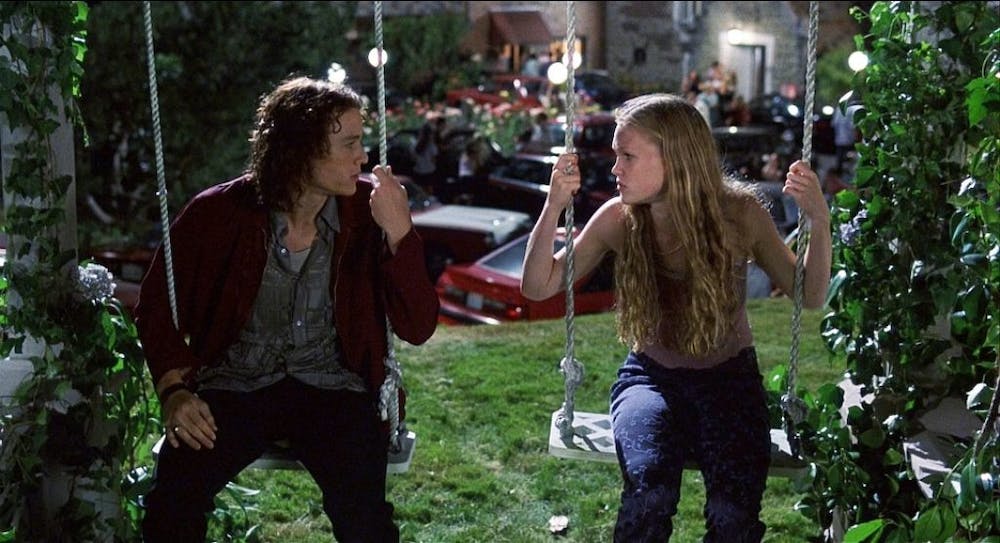 Valentine’s Day is right around the corner. Whether you view it as a scheme created by greeting card companies and Hershey’s integrated marketing team or as an important day to recognize love, we can all agree on the artistic genius that is the romantic comedy.  Regardless of your relationship status, everyone deserves to open a box of chocolates and watch ridiculously predictable romantic comedies, so here’s a list to get you started.

You may have heard of the 2021 “He’s All That” with TikTok star Addison Rae, but the original movie “She’s All That” takes the cake in cinematic quality. It follows the love story between social outcast Laney Boggs and popular jock Zach Siler, and is perfect for those who love makeover montages, ’90s love songs and popular high school movie tropes.

It is available to watch on Netflix.

This movie is a love letter to both the friends-to-lovers storyline and the city of New York. The story starts with two recent University of Chicago graduates, Harry and Sally, who road-trip to New York together before going their separate ways. However, after reuniting on a plane ride five years later, Harry and Sally become best friends and later develop a romantic relationship. Even though this film is around three decades old, its memorable execution of the friends-to-lovers trope combined with a snarky sense of humor has kept movie lovers hooked since its premiere.

It is available to watch on HBO Max.

Did I base my middle school persona on the quirks, talents and overall ambivalence of Kat Stratford? Yes, and what about it? Based on Shakespeare’s “The Taming of the Shrew,” this movie follows two sisters: Kat and Bianca, who are seemingly each other’s opposite. Bianca is the stereotypically feminine sister with many potential suitors, while Kat is combative, frightens her peers and spends her time reading and going to obscure concerts. Unfortunately for Biana’s would-be boyfriends, the sisters’ father has decided that  Bianca cannot date until Kat does. To Bianca, this raises a challenge until Patrick (Heath Ledger) enters the scene, making both of their love lives seem more likely to materialize. This movie’s complex characters add nuance to an otherwise typical plot.

It is available to watch on Hulu.

This movie is the perfect combination of fantasy and rom-com, an uncommon one for the genre. Jenna, an insecure 13-year-old, wishes she could skip through the awkwardness and be “thirty, flirty and thriving.” After magic dust grants her that wish, she wakes up as a glamorous and professional 30-year-old living in New York. However, after reuniting with Matt, her childhood best friend, Jenna learns to be careful what she wishes for.

It is available to watch on HBO Max.

Andie, a “how-to” advice columnist, takes a shot at a not-so-typical story pitch: how to date a guy and lose him in ten days. However, her subject of choice, Ben, is on a conflicting mission: he bets his friends that he can make any girl fall in love with him in ten days. While each individual pursues their respective goals, real feelings get in the way.

It is available to watch on Amazon Prime Video.

Many of the films referenced above follow white, cis-heteronormative relationships that don’t represent the demographics of every viewer. “Love, Simon” made history as the first major studio film to feature a gay teenager as the protagonist. This movie combines an amazing soundtrack, complex characters and the cutest ferris wheel scene of all time to make for an enjoyable viewing experience.

It is available to watch on Hulu.

Since she was young, Lara Jean wrote letters for all the boys she’s ever had crushes on. However, when one letter gets out to her middle school crush, Peter, the two begin to fake-date to spite Peter’s ex and Lara Jean’s true crush. However, the prolongation of their charade leads to true feelings developing.

It is available to watch on Netflix.