Review: ‘Death on the Nile’ is a murder-mystery without substance 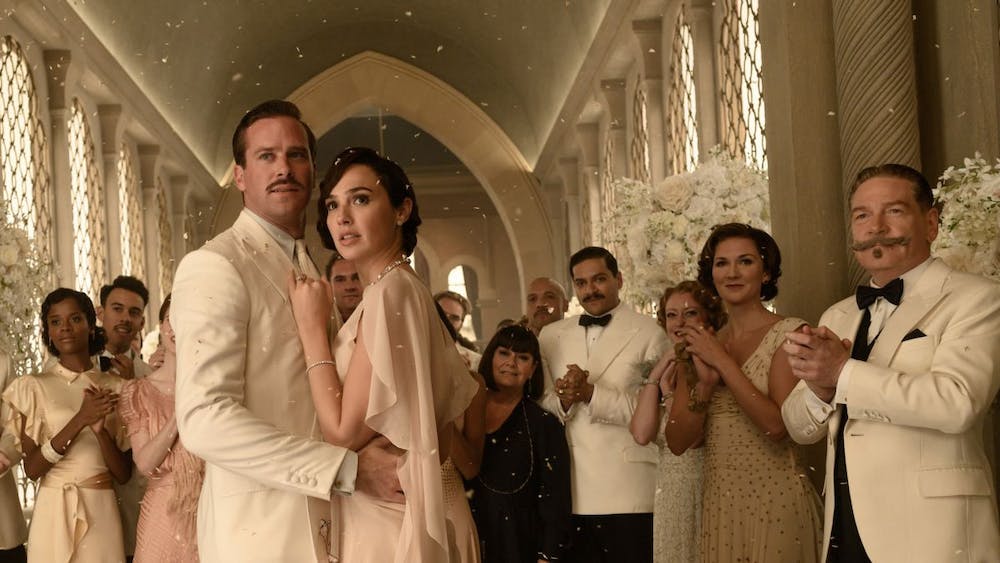 Going into “Death on the Nile,” I had extremely high hopes for this murder-mystery film based on the 1937 Agatha Christie novel of the same name. Its predecessor, “Murder on the Orient Express,” was a fantastic film filled with twists and turns and a genuinely surprising but well-earned final reveal. However, “Death on the Nile” is a massive disappointment, failing at all levels of production.

The premise of the film is straightforward: newlyweds Simon and Linnet Doyle (Armie Hammer and Gal Gadot) are spending their honeymoon on the Nile with various friends and family members. However, Simon’s former lover Jacqueline de Bellefort (Emma Mackey) has been stalking the couple all the way to Egypt and even threatens to murder Linnet in revenge for stealing her beau. In response, Linnet hires detective Hercule Poirot (Kenneth Branagh) to ensure that Jacqueline does not cause any trouble; but soon after the party embarks on the journey down the river, a murder occurs and mayhem ensues.

As with many Agatha Christie stories, the mystery of “Death on the Nile” contains many surprising developments, but these plot twists feel shallow and manufactured by the end of the film. This can be attributed to the poorly fleshed out characters and story.

The film disappoints from start to finish. The opening act is extremely slow-paced and — with the exception of Poirot’s character — fails to meaningfully expand on any character development from the first film in the series. Instead, the film focuses on the glitz and glamor of the ultra-wealthy during the early 1930s, with many shots featuring the privileged basking in their opulence.

While this focus ensures that every set piece carries warmth and a high production quality, it ultimately feels superficial. The story unfolds without allowing its characters any agency. It seems at times that “Death On The Nile” is more centered around the luxuries of the situation than actually developing a plot with realistic characters. Aside from Poirot, none of the large ensemble was memorable.

Another cause that factors into this issue is that the acting is consistently subpar. From Gal Gadot to Armie Hammer to even Kenneth Branagh, the execution of the script feels robotic. This is surprising given the caliber of the cast, which includes Oscar-nominated performers Annette Benning and Sophie Okonedo and other household names like Russell Brand and Rose Leslie. The only actress who stood out was Letitia Wright playing Rosalie Otterbourne, a childhood friend of Linnet. Though her role was small, a grounded and emotional monologue of hers halfway through the film was very moving.

Aside from the costumes and some above-average cinematography, I cannot think of anything the film executed well. The acting and line delivery throughout feels stiff and disengaging, the pacing is poor at best, and the film as a whole feels phoned-in. All of this might have been bearable if the mystery at the center of the film had a strong revelation. Unfortunately, this was not the case.

Poirot’s solving of the mystery felt laughably unearned by the end of the film. The execution of the actual murder was so complicated that it felt hard to believe anyone could actually go through with it and barely built off of the clues laid throughout the movie.

All this to say, I cannot recommend watching this film to anyone—even committed Agatha Christie fans would find the film highly disappointing.