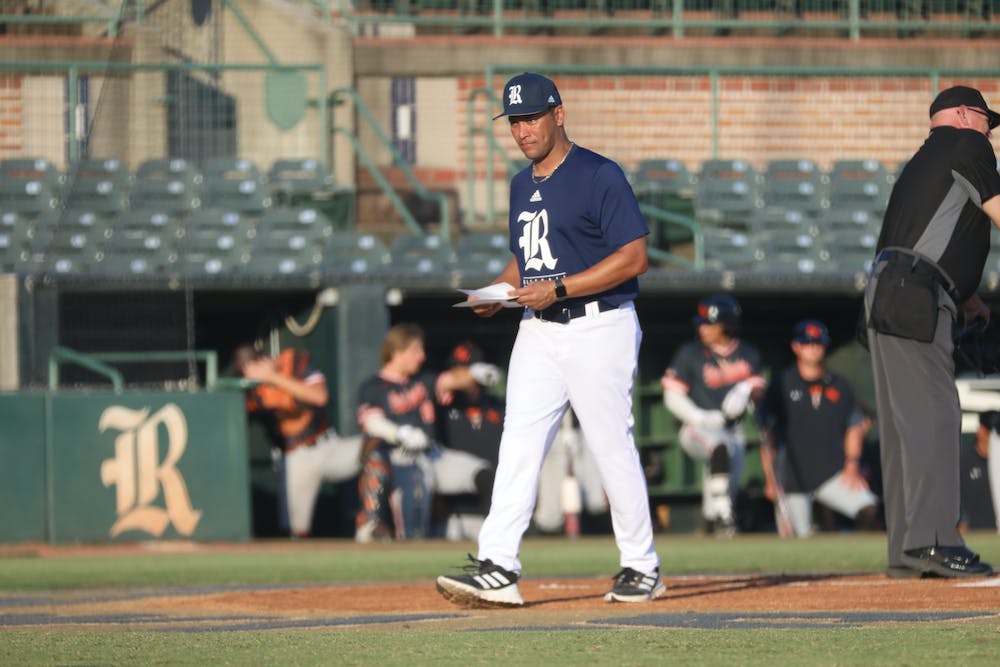 In 2008, now-Rice baseball head coach Jose Cruz Jr. had already been in the MLB for 11 years. He’d racked up over 200 career home runs and over 1000 career hits, he even won a gold glove in 2003, but he still had one thing left to accomplish.

“One of the things that I really wanted to do was play for the Astros,” Cruz said. “I was trying for years. Finally in my last year, they gave me a try-to-make-the-team deal. I took it, and thank God I made the team. Being able to play at Bellaire High School, Rice and then play for the Astros, I thought that was a giant accomplishment for me personally, for my Houston-ness.”

Cruz has a long history in Houston. While he was born in Arroyo, Puerto Rico, he moved to Houston at a young age when his father, Jose Sr., began playing for the Astros. According to Cruz Jr., some of his earliest memories involve being around the team.

While Cruz Sr. was busy becoming the Astros all-time leader in hits, a title that he held until 2000, Cruz Jr. said that his father never pressured him to follow in his footsteps.

“My dad never pushed me towards [baseball],” Cruz said. “He did push me in saying, ‘Hey if you’re going to play, you’ve got to try to be the best player you can be.’”

Cruz did take up the sport that he grew up around though, and after a standout career at Rice, the Seattle Mariners made him the third overall pick in the 1995 MLB draft. In just two years, Cruz had found his way to the majors, which he said was a bit of a shock at first.

“My first team in the big leagues had three hall of famers, and [Alex Rodriguez was] not one of them,” Cruz said. “Watching these guys right away when you get there, it was fascinating to see that kind of ability and that kind of talent and be around it.”

Halfway through his rookie year, Cruz was traded to the Toronto Blue Jays, where he spent the next five years, and came into his own off the field as well.

“I became a man there, in Toronto,” Cruz said. “Just growing up with my guys, battling with the AL East, my kids were born, I was married. It was life changing in many ways.”

Cruz bounced around from team to team, before finally calling it a career in 2008 to spend more time with his family.

“The business of baseball came in and I started floating around with different teams,” Cruz said. “You just try to do the best you can do, and contribute and play as long as you can. That took me to 2008. My son [Trei] was 10. It was just time. He was acting out a little bit at school when I wasn’t around, [but] when I was around he was great. So I was just like it’s time, there’s nothing else for me to prove.”

Cruz’s sons soon began to follow in his footsteps. His oldest son Trei played at Rice from 2018-2020 before being drafted by the Tigers, while his youngest son Antonio currently plays outfield for the Owls. Cruz said that he cherished the chance to watch their baseball careers up close, but that despite his MLB acumen, getting them to take his advice wasn’t always easy.

“I tried to have [Trei, who eventually became a switch hitter] hit left-handed when he was a kid,” Cruz said. “I gave him a left-handed grip, but he refused and he would hit-right handed with a left handed grip. And that’s how he hit until [former MLB all-star] Edgardo Alfonso was like, ‘hey what are you doing? Switch your hands.’ I was trying for like a year, and he wouldn’t switch his hands. And the guy told him one time, and he was like ‘okay.’”

After retirement, Cruz said he dabbled in broadcasting before settling in with the MLB Players Association, where he spent eight years. But when former Astros and current Detroit Tigers manager A.J. Hinch called about a spot on his staff, Cruz said that it felt like the natural next step to go into coaching.

“I’ve been coaching for a very long time unofficially,” Cruz said. “I’m a student of the game so I’ve constantly been at it for a while. I think a lot of the guys that played with me or [played] around my era knew that about me. So it was a natural fit for me. A.J. Hinch, he’s been trying to get me on staff for years, then finally the timing of it worked last year. So I took a leap and went, and I was in Detroit and I loved it.”

After one season in Detroit, the Rice job came open when former head coach Matt Bragga was fired after the team failed to reach the conference tournament for the first time since 1993. Cruz jumped at the opportunity to coach at his alma mater, which he said was always a goal of his.

“It’s something that I’ve always wanted to do,” Cruz said. “It’s been surreal really. The first two months of the job, I’d come here to the field and forget I had the keys. I’d be locked out, knocking on doors trying to get in.”

Since arriving at Rice, Cruz has had the opportunity to coach  his son Antonio, who plays outfield for the Owls, in a more formal role. But according to Cruz, while it’s great to spend more time around his son, being his head coach hasn’t changed much.

“I’ve been coaching him for his whole life,” Cruz said. “There’s nothing that he’s hearing me say [now] that he hasn’t heard his whole life. It’s just now it’s formal, and his teammates listen to it.”

Cruz is now nine months into the job, but just judging from his office you’d never know it. Aside from a whiteboard with the names of potential recruits, and a bookshelf of binders, the walls remain empty. But Cruz is now back in his hometown, at his alma mater, coaching his son. And if he has his way, he’ll have plenty of time to decorate.

“Everything [in my life] filtered through Rice,” Cruz said. “My sons came through Rice … My brother [was] on the team that won the national title here … I’m not going anywhere else. This is it for me.”