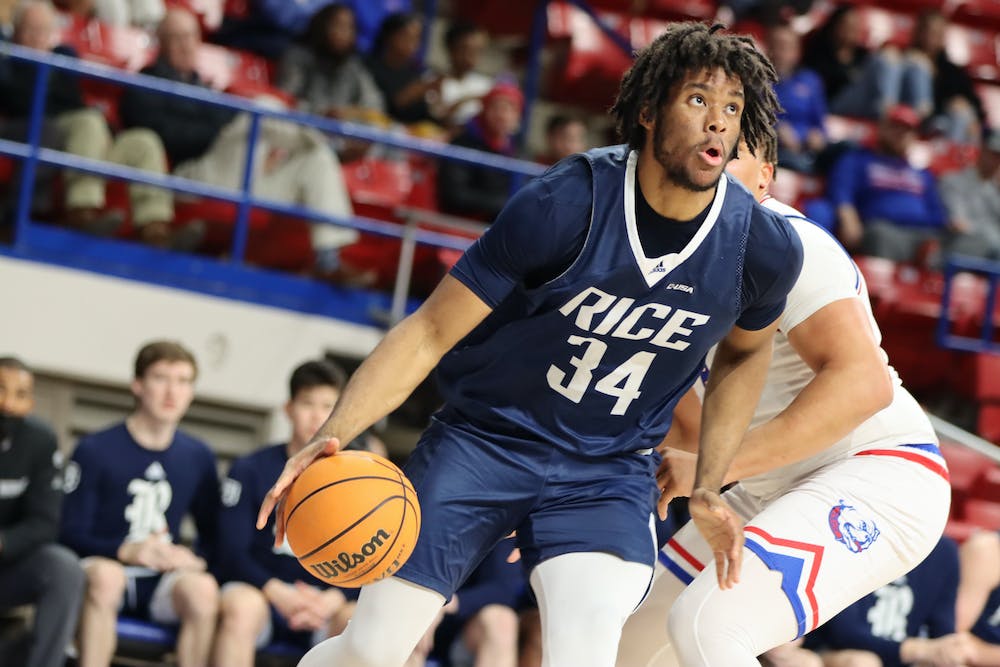 Last Thursday, the Rice men’s basketball team traveled to the Thomas Assembly Center in Ruston, LA to face off against then conference co-leaders, Louisiana Tech University. The Bulldogs defeated the Owls 80-63 in the first matchup between the two squads this season. The Bulldogs were able to sustain an Owls push at the beginning of the game and put together several significant runs to put the game out of reach. According to head coach Scott Pera, the Owls played with plenty of effort, but weren’t consistent enough.

“We only played well in stretches,” Pera said. “The beginning stretch was very good. Our kids kept fighting to cut it to [nine] and I’m really proud of that. Our effort was really good. Our discipline with the ball was really good.”

Held to a 32.8 field goal percentage and 15.4 percentage from three-point range, the Owls struggled shooting the ball against a stout defense. The poor shooting, according to Pera, played a key role in the Owls’ loss.

“We just couldn’t make a shot,” Pera said. “We had some guys who have produced for us a lot and didn’t produce [tonight]. That makes it really difficult to beat anybody, let alone one of the best teams on their home floor. We had to play a really good game to beat them.”

Rice led for much of the opening ten minutes, but a 19-3 LA Tech run in the closing minutes of the first half gave the Bulldogs a big lead going into halftime. Rice was able to narrow the deficit to nine at one point, but a late LA Tech push brought their lead back to 17 and seasled the game. According to graduate transfer guard Carl Pierre, the energy that the Owls started off with and their overall defensive effort are some positives that they can take away from the game.

“I think we really wanted to come out with energy and play hard,” Pierre said. “That is something that Coach Pera talked about a lot. To start the game, I think we did that. We really put our hat on the defensive end and I think it showed a little bit. At the end though, it just didn’t go our way.”

Some of the other positives that the Owls had, according to Pera, included limiting turnovers against a strong defensive unit along with the team’s ability to gather offensive rebounds.

“The other positive is that we only had eight turnovers on the road against a very good defensive team and sixteen offensive rebounds, meaning our kids were playing hard the whole time,” Pera said. This helped us come back.”

The loss dropped their conference record to 4-4 on the season. However, they followed it up with a 76-62 win against the University of Southern Mississippi on Saturday to get back above .500. With 10 games left in the regular season, the Owls will mainly face off against their conference rivals as they aim to qualify for the Conference USA Tournament in early March. As the team enters the home stretch of their season, they are finding ways to improve so that they can end the campaign on a high note.

According to Pera, the team could most improve by focusing on their energy, especially in the road environment. Although the team started off strong, Pera said that he wants the team to be able to keep this energy high throughout the game.

Pierre emphasized the need to limit runs from opposing offenses to prevent games from getting out of hand.

The Owls, who are currently 12-8 and have a 5-4 conference record, return to action at home this Thursday at 7 p.m. when they face off against the University of Texas, San Antonio. The Roadrunners are 8-14 overall and 1-7 against conference opponents.