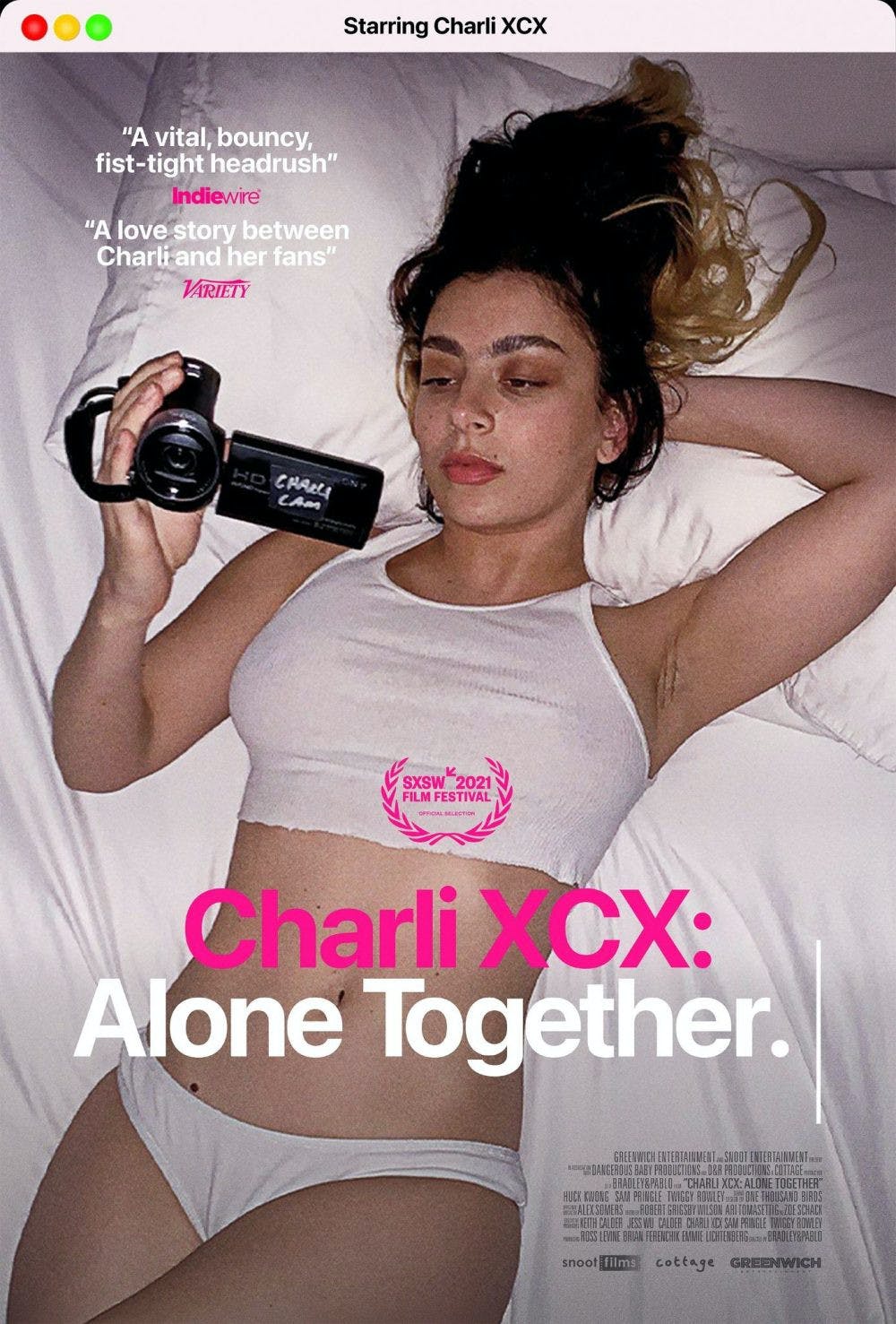 Early in the “Alone Together” documentary, Charli XCX reflects on her early career at a time when people knew her songs but not her. Constrained by typical pop fare like “I Love It” and “Fancy,” Charli XCX didn’t shine until she charted her own path with the experimental PC Music collaborative in 2016’s “Vroom Vroom.” Ironically, the documentary makes the exact same mistake by flattening Charli XCX into a cut-and-dry popstar narrative that destroys the beautiful nuance of her pandemic-era musical production.

Set on the backdrop of the global pandemic we know and love, Charli XCX decided to record and release an album within weeks while quarantining in her Los Angeles home. This recording process sets the stage for the documentary, promising an insight into her creative process. Since Charli XCX’s run up to “how im feeling now” sustained my early pandemic malaise, I was hyped. In spring 2020, I listened to the singles the second they dropped and danced around in my room to the album. But instead of capturing that transcendent, fleeting euphoria amongst pain, “Alone Together” opts for heavy-handed cuts of newsreels and simplistic interviews with fans. Even touching moments like Charli’s discussion of her mental health struggles fall flat due to overwrought scoring.

The works of art whose creation the documentary supposedly tracks remain much more interesting than the documentary itself. The music videos for early singles like “forever” worked because they lacked narrative. They were smorgasbords of fan-submitted emotion that lacked stable categorization, allowing fans to find meaning. “Alone Together,” meanwhile, never misses an opportunity to tell viewers just how special the moment was. The producers pick the corniest lines from fan interviews and intersperse them with the clunky Tweets with the tone of a forty year old marketing manager. Only when the documentary shuts up and shows clips of fans dancing on Zoom does it begin to encapsulate the essence of the album and the experience surrounding it.

The documentary also fails to address the tensions between Charli XCX and her fanbase that are so defining of the artist’s career. Charli XCX is infamous for having unfinished versions of her tracks released online by fans, leading to entire scrapped albums and emotional duress for the singer. Even her most ardent fans made memes of it (a fan in the documentary has the scrapped album cover as a screensaver). This leads to an uncomfortable dynamic where Charli XCX gains popularity and infamy from the leaks at the cost of her mental health. These are exactly the nuanced themes a Charli XCX documentary should address beyond the surface level.

“Alone Together” does criminal injustice to one of the most brilliant, boundary pushing pop stars of our generation. It flattens Charli into the exact narrative she’s spent the last half decade trying to escape. Instead of spending an hour with this nothingburger, go watch the videos Charli put out during the quarantine period, from the jubilant “claws” to her wonderful Minecraft set to her Alphaville visions remix. I paused the documentary multiple times to do just that. Charli XCX is about finding your own meaning amongst her chaos, not being instructed by exaggerated visuals and music drops on how to feel.