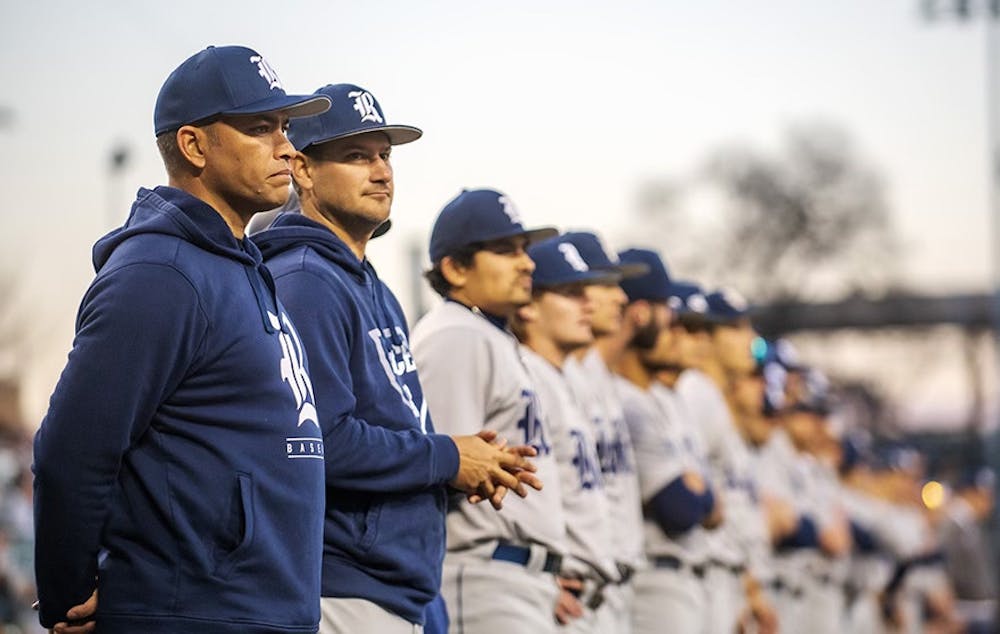 Rice baseball was swept by the No.1 ranked University of Texas, Austin to start their season this past weekend.  In Jose Cruz Jr.’s debut as the team’s head coach, the Owls lost to the Longhorns each day of the weekend by large margins: a 7-0 defeat on Friday, a 15-1 loss on Saturday, and a final score of 14-2 on Sunday.

Graduate-transfer pitcher Cooper Chandler got the start for the Owls on Friday, giving up two runs in the first three innings, before an error-plagued fourth inning brought the Longhorns’ lead to five, and knocked Chandler out of the game. The Longhorns tacked on two more runs in the fifth, while Owls couldn’t get their bats going for the rest of the game.

The middle-inning collapse turned into a common theme for the Owls over the weekend. On Saturday, Texas took a 3-0 lead into the fourth inning and turned it into a 13-0 lead by the end of the sixth. On Sunday, the Longhorns combined for 11 runs in innings four through six as well.

In addition to the Texas offense coming out to big leads, the Texas pitchers made it difficult for the Owls to find any offensive success. Led by a pair of Freshman All-Americans from last season in Pete Hansen and Tanner Witt, the Texas pitching staff dealt a shutout for the first 17 innings of the season. Throwing a total of 25 strikeouts, Texas only allowed 18 hits leading to three total runs throughout the three-game series, including a shutout in the season opener.

According to Cruz, one of the biggest weaknesses of the team during the series was their mental lapses on the defensive side of the ball.

After an undesirable start to his managing career with the Owls, Cruz believes that the team has a lot to improve on. The bullpen, in particular, seemed to struggle throughout the series, according to Cruz, allowing 22 earned runs and issuing 20 walks.

“There were too many walks out of the bullpen, which me and my staff didn’t really understand,” Cruz said. “For us, we got to take a big look when we look at the bullpen.”

Cruz also said that while he thought the starting pitchers showed promise, they still needed to go longer into games. The starters only pitched a total of 9.1 innings throughout the series, leaving the bullpen to carry the rest of the burden of facing off against the Texas batters.

“I thought [Chandler] was very competitive and I believe that he is going to be very good this year. I think the three starters were really good,” Cruz said. “As far as competitiveness, we have to find a way for them to go longer. No one really went past three innings. Those are some things that we can work on.”

Cruz was happy with the way the offense progressed through the series but believes that there is more to be desired. Although the offense made some good decisions, Cruz said that there are still things that the offensive playmakers can improve.

“Our at-bats got better as the series progressed,” Cruz said. “As far as our offense, I thought our first night was nothing. The second night was better and the third night had some good swings. I think our guys are going to hit and are better offensively than what was shown here.”

According to Cruz, the team’s growth is going to be slow and the process will be taken one step at a time as he also believes that he needs to develop some of the things that he had inherited when he took the job at the end of last season.

“We have some things to work on and adjust,” Cruz said. “So [it’s] one step at a time. We have to develop some guys and undo some things that I inherited here. It will take some time, but we are confident that we are better than what we showed.”

The Owls will return to Houston to face off next against Houston Baptist University away from home on Wednesday at 2:00 pm. The team will play their first home series of the season this weekend when the Owls face off against Lamar University starting on Friday at 6:30 p.m at Reckling Park.