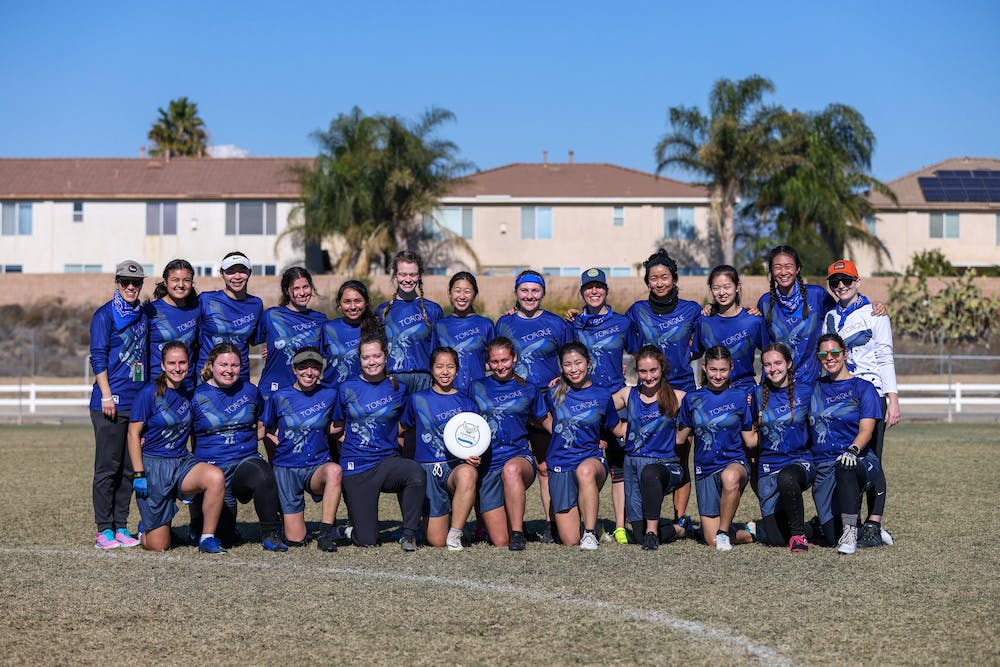 Following cancellations due to COVID-19 that altered women’s club ultimate frisbee’s 2020 and 2021 seasons, they finally got a chance to play out their previous seasons this past fall. According to Hanszen College senior Amanda Lopatin, one of the team’s two captains, their participation in regionals this October was the first chance to play together as a team again for quite some time.

“We didn’t get to play last year,” Lopatin said. “We had regionals in October and those were our first games since February 2020.”

The team, which competes in Division III of USA Ultimate, the governing body that oversees club ultimate frisbee competitions across the country, normally spends fall semester recruiting new players and preparing for the upcoming season. However, this year would be different because it was decided that in addition to their normal spring season, they would have a fall season to make up for 2020-21. That meant that players from prior seasons who had could also compete during this year’s competitions in the fall.

Regionals provided the first opportunity for the team, which goes by the name Torque, to finally come together, with newcomers, returners and graduates all playing on the same team with hopes of making it to nationals. According to Brown College sophomore Heather Szczesniak, the team’s other captain, playing in regionals allowed the team to mesh, with the returners helping to make the team transition a smooth one.

“It definitely took a little bit, like maybe our first couple games, and we were kind of working on figuring out different people’s feeds and what different people’s favorite type of throws were and how to work with different people.” Szczesniak said. “We did get a regionals tournament where we also got to play with them, so that allowed us to get together and work on it a little bit and then also a lot of returners are very good high-level players so even though you do have to learn a little bit of working together and playing as a team, it was very easy to play with them because they were really incredible players.”

Torque was able to win at regionals, which punched their tickets to nationals, which took place from Dec. 17-20 in Norco, California. According to Lovett College freshman Sophia Figueroa, the realization that they were going to nationals was an emotional one.

“Everyone was really happy, but especially [graduated seniors from last year] because they weren’t able to experience that last year,” Figueroa said. “[For them] to be able to experience it with the new team also made it really gratifying and brought the team together because we actually haven’t really played that much prior to regionals as a full team [in] full games.”

At nationals, the team was able to compete and watch high-level talent throughout the tournament. The team began nationals in pool play. Rice placed second in their pool, and advanced tobracket play. After they were eliminated by Vassar College in the first round of bracket play, the team moved to the consolation bracket, where they were set to play for ninth place, but according to Lopatin, the game was called off.

“We were supposed to play for ninth place against Brandeis on the next day, but they actually [had] a COVID case in their team and so they had to pull out of the tournament so then we got ninth place by default,” Lopatin said.“It was the [division I] and [division III] nationals at the same place at the same time, so even though we couldn’t play on the third day we still got to go watch a bunch of games and it was really cool.”

As nationals concluded, Torque experienced the distinct environment that is ultimate frisbee. While the team didn’t manage to win the tournament, according to Figueroa, they left with another award.

“The community of ultimate is really fun,” Figueroa said. “Everyone was cheering on each other, they have this thing called the “spirit of the game” where, since everything is self-reffed, the teams check in with each other to make sure that it’s good sportsmanship throughout. Our team won the “Spirit of the Game” award [which] means that we knew the rules, were very friendly with the other teams and communicated well, and just [had a] good spirit overall.”

“It was really exciting,” Szczesniak said. “For me, I’m a sophomore and am a captain of the team, but I also just joined last year and it was COVID year so we didn’t really get to do a whole lot. It’s really exciting that in my first real season we made it all the way to nationals and it’s just a really great experience to be able to play a really high-level of ultimate.”

Lopatin reveled in being able to achieve her ultimate frisbee goal, while also being able to show the next wave of players at Rice the sport at a high level.

“It meant a lot to me because I’ve been on Torque every year and it’s always been a goal to make it to nationals, so it was really exciting to be there with everyone,” Lopatin said. “We have a pretty young team in terms of year at school and also new to the sport, so I thought it was a really good bonding experience for us and then [also] a way to show them what high-level ultimate looks like and what the future can hold for us as a team.”

According to Szczesniak, the team was also able to bring back graduated players for their tournament run, and it was meaningful for them to finally see their ultimate frisbee careers out after losing their senior season.

“It meant a lot to a lot of them because they didn’t get their senior year tournaments,” Szczesniak said. “So the fact we made it all the way to nationals meant that they got to really have a great finale to their Rice frisbee experience.”

The team will now work on honing its craft as they gear up for their spring season, where they’ll aim to make another run to nationals. According to Lopatin, she believes that with continued work and practice, the team has a chance to make it once again.

"Every team just like us had to take 2020 and 2021 off so it’s kind of like a clean slate for everyone," Lopatin said. "So I think that if we put in the work, we have a good shot at making it back to nationals in the spring.”

The women’s club ultimate frisbee team are self-described as being a very welcoming group where they compete and embody ultimate frisbee’s community. According to Szczesniak, ultimate frisbee has been a terrific experience at Rice for her, one in which she now enjoys helping others grow in her captain position.

“It’s a really great experience for me at Rice," Szczesniak said. "There’s a lot of new players on the team who have never played before and came and tried ultimate as one of their first experiences at college and it’s really cool to watch how they grow and watch them progress from complete beginners to people who are at nationals. So it’s really nice to watch them grow and have that captaining role where I can help them grow.”

According to Lopatin, with the spring season almost in swing, Torque are looking to welcome anyone who is interested in being a part of their team as they prepare to make another run to nationals.

"We don’t have any tryouts or we don’t make cuts or anything like that," Lopatin said. "You don’t need any experience, everyone is welcome.”