Women’s basketball falls to Charlotte in their longest-ever game 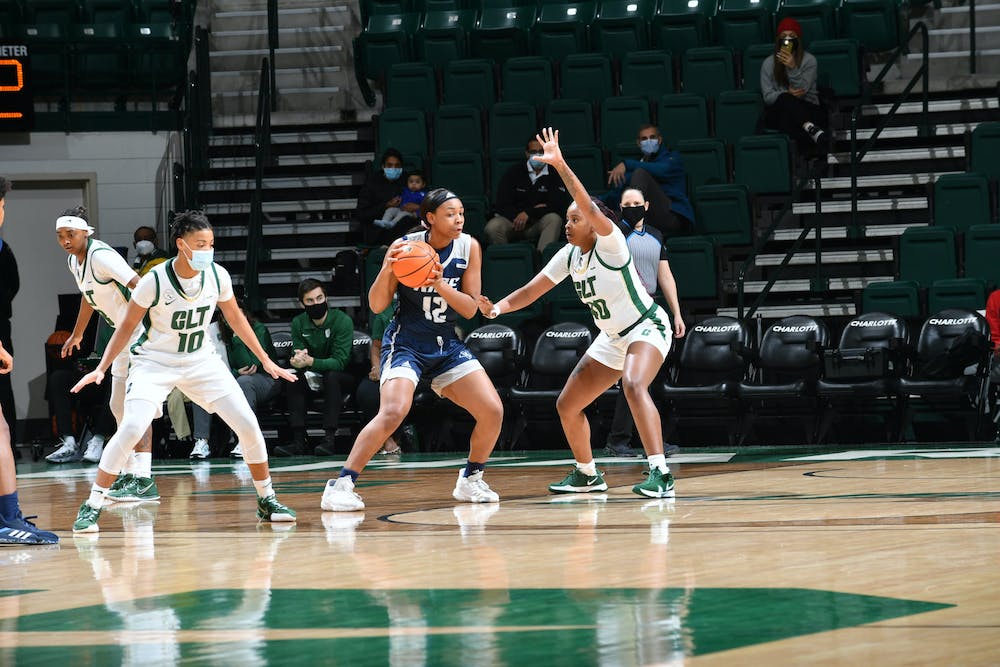 The Rice women’s basketball team played the longest game in program history on Saturday, falling to the University of North Carolina at Charlotte in four overtimes. With Rice holding a lead in the final seconds of each of the first two overtime periods, the 49ers hit game-tying shots to keep the game alive. The deadlock was finally broken in the closing minutes of the fourth overtime, as the 49ers pulled away to an 88-83 win, dropping the Owls to 0-5 in conference play. According to head coach Lindsay Edmonds, even though the Owls didn’t get the win, they impressed her throughout the game with their grit and resolve.

“I’m so unbelievably proud of my team,” Edmonds said. “I know we didn’t get the win but they showed ultimate heart and toughness for 60 minutes against a very good and veteran team.”

If the eight-period game wasn’t straining enough for the Owls, they played all 60 minutes with a roster of just eight players due to a slew of injuries. Redshirt freshman guard Maya Bokunewicz played 58 minutes, while junior guard Haylee Swayze one-upped her with 59 minutes and freshman forward Malia Fisher played the whole hour, but according to Fisher, the fatigue never set in.

“That was the longest game I have been a part of,” Fisher said. “It started like a typical game, but the end always comes down to a mental battle. I honestly didn’t feel as tired as I was because of the adrenaline and the motivation I had to win, but the day after was tough to handle.”

Rice fell behind early as Charlotte got out to a 16-7 lead in the first quarter. But the Owls went on a run in the second quarter, to even the game at 23 going into halftime. The 49ers pulled back ahead in the third, but Rice leveled the score, and the game went into overtime tied at 59.

In a slow first overtime period, Rice took a two point lead with just over two minutes remaining. Neither team scored again until Charlotte’s Octavia Jett-Wilson, the Conference USA Preseason Player of the Year, beat the buzzer with a game-tying layup. Rice was seconds away from winning in the next overtime period as well, but Jett-Wilson once again hit a late shot to level, this time with three seconds remaining. According to Fisher, each time the game got extended, the team tried to muster up enough energy to make it to the final buzzer.

“Each one of us wanted this really bad and [wanted to] get that first win under our belts,” Fisher said. “We were constantly saying ‘five more minutes,’ ‘one more minute.’”

The third overtime was the highest scoring, with the teams combining for 22 points, but neither team could hit a shot after Rice tied it with 41 seconds remaining, and the game headed to a fourth extra period. According to Fisher, as the game wore on, the stakes got higher for the Owls.

“Everything was heightened in this game,” Fisher said. “The competition, the stakes, the motivation. We wanted this one.”

With the game tied at 81 halfway through the final period, the 49ers went on a 4-0 run to finally put some distance between the two teams, and they hung on for a five-point win. According to Fisher, while it would have been rewarding to get the win, she knows the team gave it everything they had against a team that’s currently undefeated in their conference schedule.

“It would have felt amazing to know that our efforts [had] been rewarded,” Fisher said. “But at the same time I know every one of us put forth our all. We played for each other and took a top ranked team to four overtimes.”

Jett-Wilson led all scorers with 36 points, while Rice sophomore forward Ashlee Austin nearly matched her with 30. However, the game was largely a defensive battle, with both teams shooting under 40 percent from the field. According to Edmonds, there was a lot to like about the team’s performance.

“There is so much we can take away from this game and while I really wanted this win for the players, we have nothing to hang our heads about,” Edmonds said.

According to Fisher, Rice’s bench also played a big role in the game. Due to heavy snow in the area, most fans were unable to make the game, allowing Rice to feed off of the energy from their bench. Fisher said that this made the team feel as though they had an extra player.

“[It seemed like] we had more than eight players,” Fisher said. “The energy from the bench and the communication that came from them gave us an extra player. Without that energy, I don’t think we would have gone as hard as we did.”

While the Owls are still searching for their first C-USA win, each loss this season has been by a lower margin than the previous one. According to Fisher, this game, their closest of the conference season, showed the progress that they’re making in the first year of Edmonds’ tenure.

“There is a lot of growth and a lot of positives that come from this game,” Fisher said. “Charlotte wasn’t expecting us to come in how we did. This game shows everyone that Rice can compete and we aren’t going to lie down without a fight.”

The Owls will once again look for their first conference win when they host Louisiana Tech University on Thursday at 7:00 p.m.