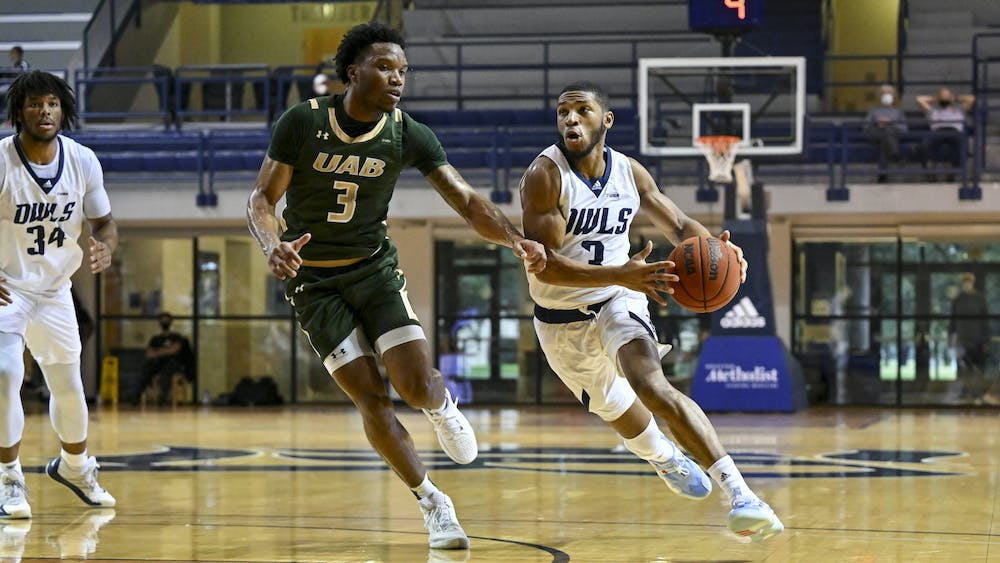 The Owls welcomed UAB to Tudor Fieldhouse last Saturday. After a back-and-forth first half, the Owls trailed the Blazers 39-34 at halftime. Just a few minutes into the second half, Rice found themselves down by ten points, but they rallied to score 51 points in the half en route to an 85-80 victory. Sophomore guard Travis Evee’s 25 points led the way for Rice, along with freshman forward Mylyjael Poteat, who scored 14 of his 18 points in the second half. After the game, head coach Scott Pera said he was thrilled with the win.

“What a second half performance by our guys across the board,” Pera said. “We held our own on the glass, out-rebounding [UAB] by 11. We made huge free throws down the stretch. They never wavered in their belief that they could win the game. We talked about it after the Middle Tennessee game. We had to believe first. If you don’t believe, you have no chance. The kids executed and I’m really happy for them.”

After getting knocked out of the 2021 C-USA tournament last year by UAB, Evee says that this game showed the hard work the team put in during the offseason.

“It definitely feels good,” Evee said. “All summer we said ‘we’re going to take the next step’ and today was a great win for the program and shows all the work we’ve put in trying to be a better program.”

Earlier in the week, the Owls also got the better of MTSU in another tight game.

Early in the first quarter, the Owls got out to a strong start, taking an early 8-3 lead before Middle Tennessee closed the gap. At the end of the first half, Evee scored seven points, leading an 8-2 run that gave the Owls a five point lead entering the half.  Although they ended the half strong, graduate transfer Carl Pierre said that the team needed to make adjustments for the second half.

“We just wanted to get back to Rice basketball,” Pierre said. “We had nine turnovers and two assists at halftime and that’s not how we want to play. We wanted to get the ball moving and get back to playing together again.”

After MTSU took the lead back early in the second half, the Owls overcame a six-point deficit with ten minutes remaining in the game to grab their first conference win of the season 65-61. After the game, Pierre said that he was proud of how his team handled the late deficit and gutted out the win.

“It did get close towards the end but we are an older group and we executed towards the end of the game,” Pierre said.  “Guys got me the ball in the spots that I wanted and they had confidence in me to knock them down and I did. We got to protect home court and that is something we emphasize a lot. I’m really proud of our team and our guys to win ugly, find a way to win and get back to .500.”

Against MTSU, the Owls defense held the Blue Raiders to 35.7 percent shooting from the field and zero fast break points. After the game, Pera was pleased with how his team left everything on the court.

“It was a tremendous win by our kids,” Pera said. “There’s no other way to put it. They were exhausted, running on fumes and refusing to give in, making a comeback when [MTSU] got the lead in the second half, and fighting back. I’m really proud, especially [with] what we’ve been through.”

Pierre led the Owls with 19 points and 10 rebounds, tallying his first double-double of his career. According to Pera, Pierre has been instrumental to the team’s success.

“It was [Carl’s] first career double double,” Pera said. “As far as making shots, he’s been making them all year. He’s a fifth year guy so he’s played 150 college basketball games so he’s not afraid to take the big shot and boy I’m sure glad we have him.”

Over the past few weeks, the Owls faced difficulties with COVID-19 with numerous players testing positive over the break. Once the team was cleared to return to the court, the Owls fell in their conference opener by 32 points to the University of North Texas. After a rough start to the new year, Evee said he was happy to get back on the right foot against Middle Tennessee.

“We got hit a week or two ago with COVID cases which knocked us out of rhythm but I’m so proud of our team today,” Evee said. “We faced adversity losing to North Texas but we came out today and played our game.”

Now standing at 2-1 in conference play, the Owls will look to build off the big wins as they go on a two-game road trip. According to Pera, both the MTSU and UAB wins show that the Owls are capable of being one of the best teams in the conference.

“We want to compete in the upper half of the league,” Pera said. “We want the third game in the tournament to be the championship game and that’s where we’re trying to get this program. This league is really good but if we give our best every night, we can win our share.”

The Owls return to the court on Thursday, Jan. 13, when they take on Western Kentucky  University at 8 p.m. in Bowling Green, KY.