Volleyball falls to No. 2 Texas in round of 32 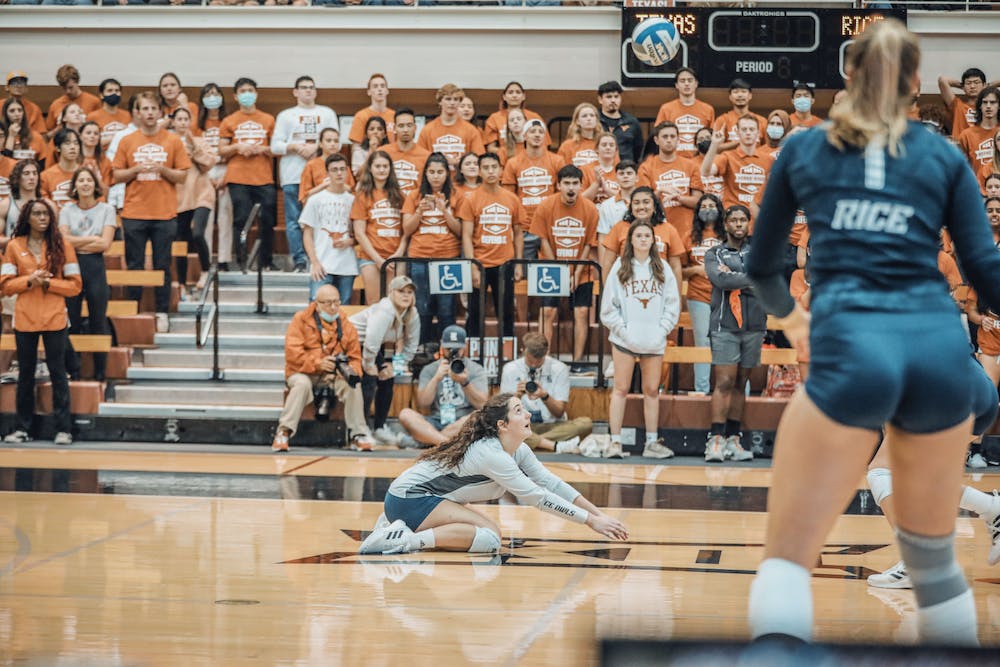 Rice volleyball’s season came to a close on Friday night as they failed to knock off No. 2 University of Texas, Austin in the second round of the NCAA tournament. The Owls fell by a score of three sets to none, despite keeping the first two sets close. After the match, head coach Genny Volpe said that the Owls played well enough to beat almost any team in the country, but the Longhorns proved to be too strong.

“We really wanted to win that,” Volpe said. “It’s unfortunate that we didn’t, but I think that we met up with a really tough team in the second round, [and] it might have been a different story against another team.”

After the Longhorns took the first four points of the evening, the Owls fought back to tie the first set at seven. The teams traded points until the set was tied at 15, but from there Texas pulled away and took the set 25-21. The second set was the closest of the match, with Rice fighting back from down 14-7 to bring the score to within one at 23-24. But Texas took the last point to seal a 25-23 win. Rice fought through a back and forth third set to take a 17-16 lead, but from there it was all Texas, as the Longhorns went on a 9-2 run to close out the set and secure their place in the Sweet Sixteen. According to Volpe, the Owls put up a strong fight in all three sets even though their efforts came up short.

“I’m extremely proud of how we played,” Volpe said. “We executed at a very high level offensively against a really strong defensive team, especially at the net.”

At the final whistle, Rice had a hitting percentage of .340, the highest anyone has hit against the Longhorns all season and .19 points higher than they had in their first round sweep of the University of San Diego. But despite their offensive efficiency, they were outhit by .150 as Texas put up a season-high .490. Despite the 3-0 loss, Volpe said that their offense was playing as efficiently as she could have hoped for.

Friday marked Rice’s second loss to the Longhorns on the season, after a 3-0 Texas sweep at Tudor Fieldhouse in September. Prior to that match, Rice had beaten Texas in two consecutive matchups – their first two wins against the Longhorns in program history.

Friday night marked the final game of senior outside hitter Nicole Lennon’s Rice career. Lennon leaves South Main as the program’s all-time leader in kills. After the match, Lennon said that her time at Rice has helped her build character and friendships that will last longer than the five years she spent with the program.

“It’s really hard to put into words,” Lennon said. “I’ve had an amazing time. I've built character for sure. When I came in I was not really emotionally tough but [now] I always love when Genny always tells me that I’m really good at bouncing back and I think I can take that into my real life. [I know it’s] totally cliché, I say it every day, but I’ve made my best friends on this team and I’m so thankful for those relationships.”

According to Volpe, in her time at Rice, Lennon played a key role in turning the program into what it is today.

The Owls will now turn their attention to next season. In addition to Lennon, the team will lose two of their three defensive specialists/liberos in Elizabeth LaBue, the team’s leader in digs, and Tia Grippo. However, they could potentially return 13 of the 16 players on their roster, including a pair of first-team all-conference selections in junior setter Carly Graham and junior middle blocker Anota Adekunle. The team will look to build on the second consecutive season in which they went undefeated in conference play, attempt to claim a C-USA tournament championship for the first time since 2018 and return to the NCAA tournament for a fifth straight season.