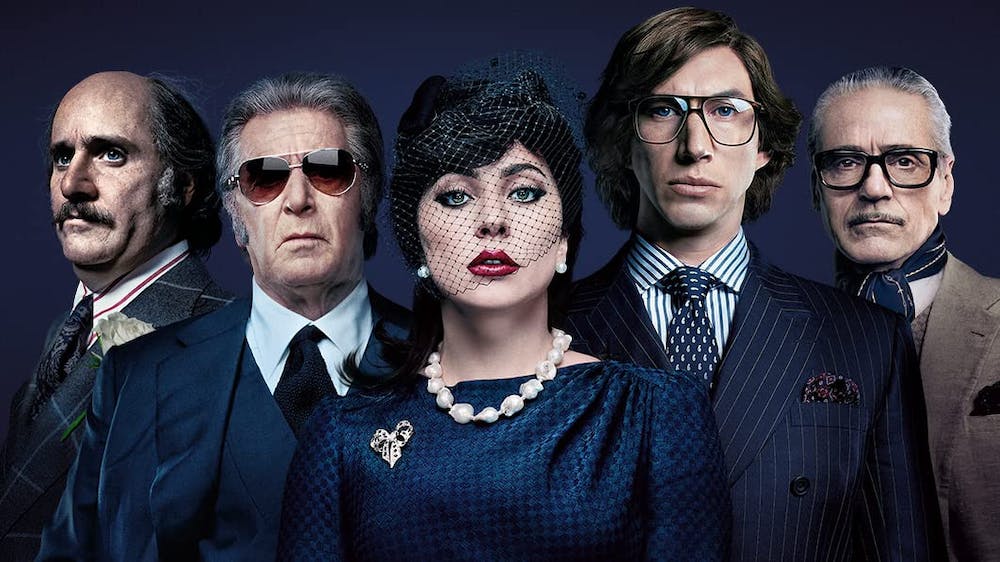 “House of Gucci” chronicles the decline of the Gucci company in the late 70s, exploring the family conflict that led to the company’s misfortune. Directed by Ridley Scott, the film is a beautiful yet poorly structured work which dazzles in its character work and acting but disappoints in the execution of its story. The film follows Patricia Regianni (Lady Gaga) as she enters the family by marrying heir Maurizio Gucci (Adam Driver). Though their relationship is the root of the first and second act of the film, “House of Gucci” explores other key members of the family: Company President Aldo Gucci (Al Pacino), Maurizio’s father Rodolfo Gucci (Jeremy Irons), and assistant Dominico De Sole (Jack Huston).

Throughout the first and second act, a feeling of dread is cultivated, as if audiences are watching a car crash happen in slow motion. Though on the exterior, the company appears to be strong, with the family members adorned in rich excess, there are signs of trouble. For instance, at a fashion show midway through the film, Maurizio hears from an up and coming designer that no one wants to work for Gucci. Scott masterfully foreshadows the coming doom that occurs in the third act although the plot feels lost at times.

Simply put, the pacing of this film is poor. Although it begins with a strong opening following Patricia, after Maurizio and Patricia marry, the film starts to spin its wheels developing so many characters. We jump from Maurizio and Patricio to other family members like company president Aldo Gucci (Al Pacino) and his son Paolo Gucci (Jared Leto). But no character is developed completely because of this division of screen time. The second act is rather forgettable which is a shame since this film is simply gorgeous. Featuring gorgeous vistas, beautiful runway shots and a crisp soundtrack, the film oozes high-production. Ultimately “House of Gucci” could have been better served as a limited-run miniseries as that could have given its characters more room to breathe and develop.

Though plodding in its script, “House of Gucci” truly shines off the vibrancy of its characters and the actors who portray them. The primary protagonist of the film, Patricia, is one of the most unlikable characters I have ever seen, yet her portrayal by Gaga captivates and cultivates empathy for the character’s struggle. Gaga is careful never to make Patricia too sympathetic, and parts of her character development in the first act are called back onto in the third act.

Another character of note was Jared Leto as Paolo Gucci. As a scion of the family, Paolo appears to have his life set out for him, yet cannot overcome his eccentricities and the discouragement of his family members to succeed. At the level of Christian Bale as Dick Cheney in “Vice,” Leto is completely unrecognizable, and his portrayal feels overacted. Though Leto is engaging as incompetent buffoon Paolo, it does appear his portrayal may have been too over the top and inaccurate as former Gucci designer Tom Ford criticized in his review.

Overall, the character work, good and bad, of “House of Gucci” is what prevents this film from being boring. Though the film unfortunately does not capitalize on the potential of the true story it has been given, it is still worth watching.