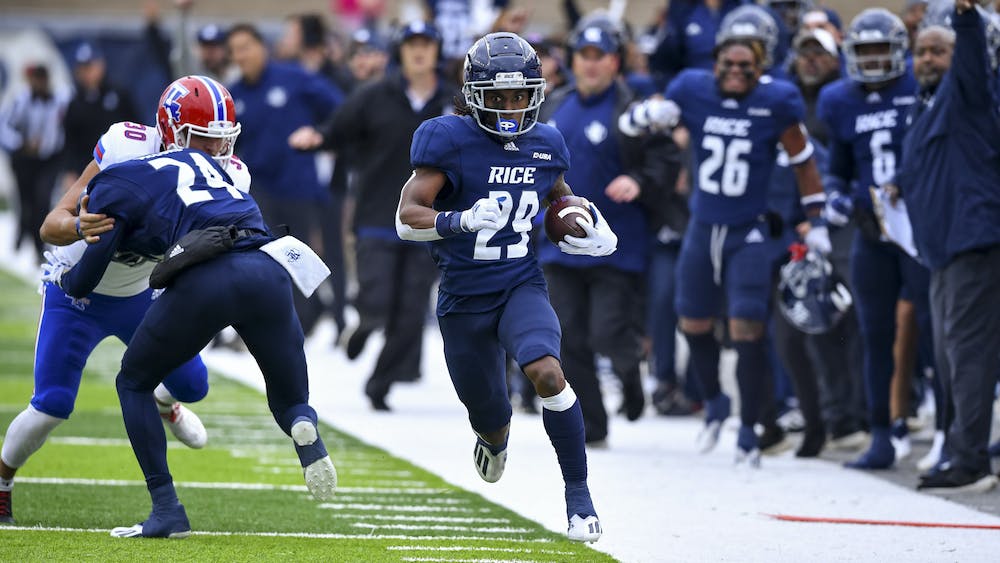 On Saturday, Rice football came back from a ten point deficit in the fourth quarter to defeat Louisiana Tech University 35-31 on Senior Day. The come-from-behind win snapped a four-game losing streak and tallied the Owls fourth win of the season, moving their record to 4-8 and 3-5 in Conference-USA.

Entering the fourth quarter, the Owls were down ten until sophomore quarterback TJ McMahon, who started the game on the bench, led the Owls on two touchdown drives in the final five minutes, finding sophomore wide receiver August Pitre III and graduate wide receiver Cedric Patterson III in the endzone. On defense and special teams, the comeback was facilitated by an interception by freshman linebacker Terreance Ellis and a 48-yard punt return by freshman Sean Fresch that set up the winning touchdown. After the game, head coach Mike Bloomgren said he was thrilled with how the team rallied for the win.

“We say it all the time, the fun is in the winning,” Bloomgren said. “I wanted it so bad for these seniors. They have meant so much to this program, especially the five super-seniors who chose to come back and play another year of football here. I’m proud of them finding a way to win on senior day. It makes everything we do during the year worth it.”

At halftime, the Owls made a quarterback change, replacing freshman Luke McCaffrey with McMahon, who completed 12 passes for 191 yards and two touchdowns. After the game, Bloomgren explained his decision to change the quarterback with two quarters remaining in the season.

“We didn’t feel like Luke was throwing the ball well today and we couldn’t call the whole offense with him,” Bloomgren said. “He was [playing] gritty and gutty and had some great runs in the first half, but there were a few [mistakes] that built up. In that moment, I felt that TJ gave us the best chance to score points in the second half. TJ stepped in and I thought he did a wonderful job in the second half in totality. When he’s in the huddle, the confidence that he exudes is really cool.”

In the post game press conference, McMahon explained how he was able to step up and make the plays when it mattered.

“It can be a long 12 games to wait and wait and wait,” said McMahon. “And the last game, I’m number two on the depth chart and I need to stay ready. When my number is called, I always think of Tom Brady and Peyton Manning saying ‘when you get your opportunity, you better not waste it’ so that’s the mindset I went in with. If I get a shot, I better pull through and do my job.”

Rice sealed the victory when freshman safety Gabe Taylor  intercepted a pass with 12 seconds remaining on the 14th anniversary of the passing of his brother and former NFL safety, Sean. Bloomgren said that it was fitting that Taylor made the play to win the game on the emotional day.

“There were a lot of people stepping up and making plays,” Bloomgren said. “[Fresch]  having a great return, TJ making a great read and it comes down to Gabe Taylor who I think played with a heavy heart. Today was the [14] year anniversary of his brother passing away. The way that the football gods work, to have that last interception land in his hands was perfect.”

“Today is exactly how we want to play football,’’ Bloomgren said.  “We’re good enough that when we perform and do our job in all segments, we can beat anybody. We’ve played in two overtime games so you could say we’re two plays away from going to a bowl [game], but somehow we need to find a way to get to … six, seven, eight, nine, ten wins next year.”

One achilles heel that the Owls have had to deal with all season is injuries to the quarterback position. The Owls rotated between McCaffrey, graduate Jake Constantine and redshirt sophomore Wiley Green for much of the season, in large part due to injuries.  According to Patterson, the quarterback shuffling is an indicator of how close the team is.

“We work with everybody in the offseason, building that connection,” Patterson said. “We know in football everything can change in the snap of a [finger] so we always have to be ready and those guys are too. We have 100 percent faith in each other so we just got to go get it done. This is a close-knit team. Everyone is supportive, everyone is encouraging. We fight for each other and have each other’s backs.”

After the final game, Bloomgren said that this season highlights the steady improvement that the program has been building the past couple of years.

“I think it’s showing that [progress] is happening,” Bloomgren said. “It’s not happening at the pace we want it to, but it’s happening. This is the first time Rice has had four wins since 2015. These seniors have left the program better than they found it. Their freshman year they had one win, the next year they had two. And now we’re building.”

The Owls will look to improve as they hit the offseason and prepare for the 2022 season. After the way the Owls fought in their last game, McMahon believes that the Owls have what it takes to have a great season next year.

“I think [this game] shows that we can hang with anybody we play against,” McMahon said. “We’re rising gradually but in the next year, we’ll be where we want to be.”