Does this count as progress? Football needs a more consistent formula 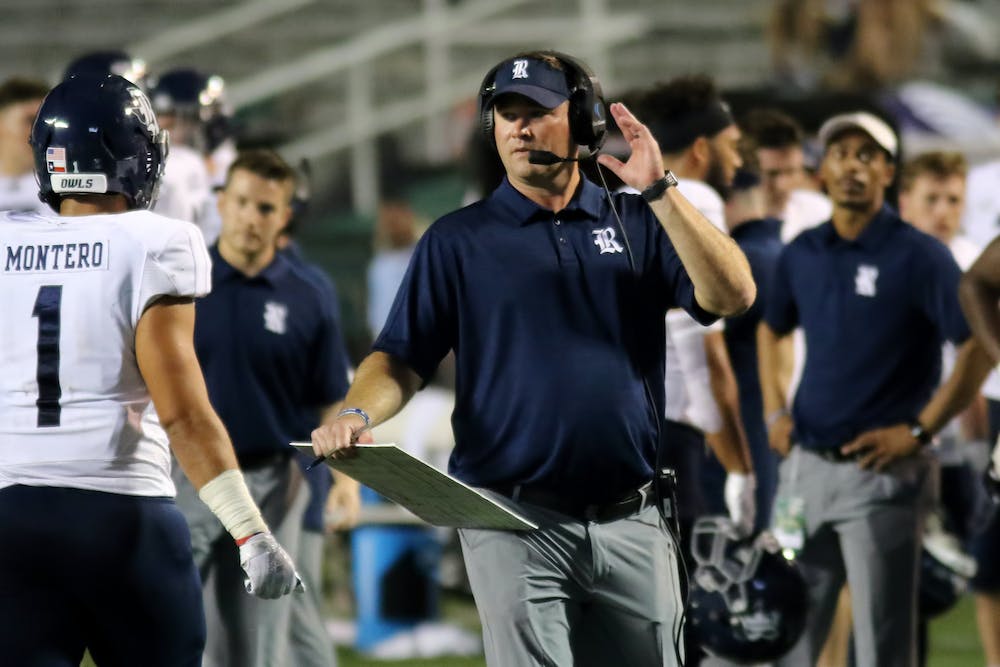 Most of the way through the 2019 season, I thought that Rice had some of the worst luck in all of college football. Through nine games, the Owls were winless, despite four one-score losses, including an eight-point loss to a Baylor University team that ended the season ranked in the top 15. All signs indicated that the Owls were much better than their 0-9 record and that their bad luck in close games was long overdue to flip. The Owls ended that season with a three-game winning streak, including two one-possession wins, appeared to confirm that theory.

The next year, it seemed like the Owls were bound to build off of their winning streak, flip their bad luck in close games and maybe even contend for a bowl-game berth. But in a COVID-19 shortened season, they went 2-3 with one loss in double-overtime on a quadruple-doinked game-winning field goal and another by just five points.

This year, the Owls once again found themselves in a number of close games. While none of their non-conference games were particularly close, five of their eight games against Conference USA opponents were decided by one score, including two overtime losses.

In head coach Mike Bloomgren’s four seasons with the Owls, 15 of their 42 games have been decided by one score, and they have gone to overtime four times (all losses). For context, in the Owls’ 42 games before Bloomgren took charge, they played in eight one-score games and didn’t play in a single overtime. At a certain point, all of these close games start to look less like a fluke and more like a pattern.

Bloomgren describes his philosophy as “pound the rock, control the clock and play great defense.” While the defense regressed this past season, he has the first two parts of his mantra down. The Owls ran the ball 476 times this year, good for fourth in the conference — just two attempts behind second place — and had the fourth fewest passing attempts in C-USA. Even more notably, the Owls controlled the clock all year, winning the time of possession battle in all but two of their games, and holding onto the ball for an average of 33 minutes a game, good for ninth in the nation.

If you hold onto the ball long enough, it will give the other team fewer possessions, meaning they have fewer chances to get out to a big lead. It’s a great way to keep games close, but as Rice’s 4-8 record shows, it’s not always a great way to win them.

While “pound the rock, control the clock and play great defense,” sounds great, in reality it’s just a nicer way of saying, shorten the game to keep it close, and then hope for the best. That’s a great way of staying in games against better competition, as the Owls did against Baylor in 2019, or pulling off the occasional shock upset, like their road win over 23.5 point favorites University of Alabama at Birmingham earlier this year, but it’s not a strategy that can lead to consistent wins unless you have a dominant running game.

Right about here, Bloomgren would probably point to his teams at Stanford University, where he was the offensive coordinator for five seasons, that finished the season ranked in the top-20 four times behind his “pound the rock …” formula. But at Stanford, Bloomgren had five future NFL draft picks on his offensive line and three future NFL draft picks at running back. So far, this team, which is tied for ninth in the conference with 3.8 yards per carry, hasn’t shown that it is capable of taking over games just by running the football. And as long as they can’t take over games on the ground, if Bloomgren keeps pretending that they can, their results will be more of the same.

So far in Bloomgren’s tenure, the Owls have made progress. They improved from 2-11 his first year, to 3-9 the next year, 2-3 in the shortened 2020 season, and finally 4-8 this year. But that progress has been slower than a 350-pound offensive lineman. Until they commit to playing more aggressively instead of just trying to keep games tight, they’ll continue to play good teams close, pull off the occasional upset, and point to progress at the end of the year. But in reality, they won’t become a consistent contender in C-USA, much less in the American Athletic Conference in a few years, by relying so much on luck in close games.

Bloomgren has done a lot of good things in his tenure. He has outlined a clear vision for the program based on playing a smart and physical brand of football. He has doubled down on Rice’s national recruiting efforts, and he has turned around the trajectory of a program that had seen its win total decrease for four consecutive years prior to his arrival. But if he wants to win consistently and compete for bowl games in the future, he will need to commit to being more aggressive and not be so content to play close games.