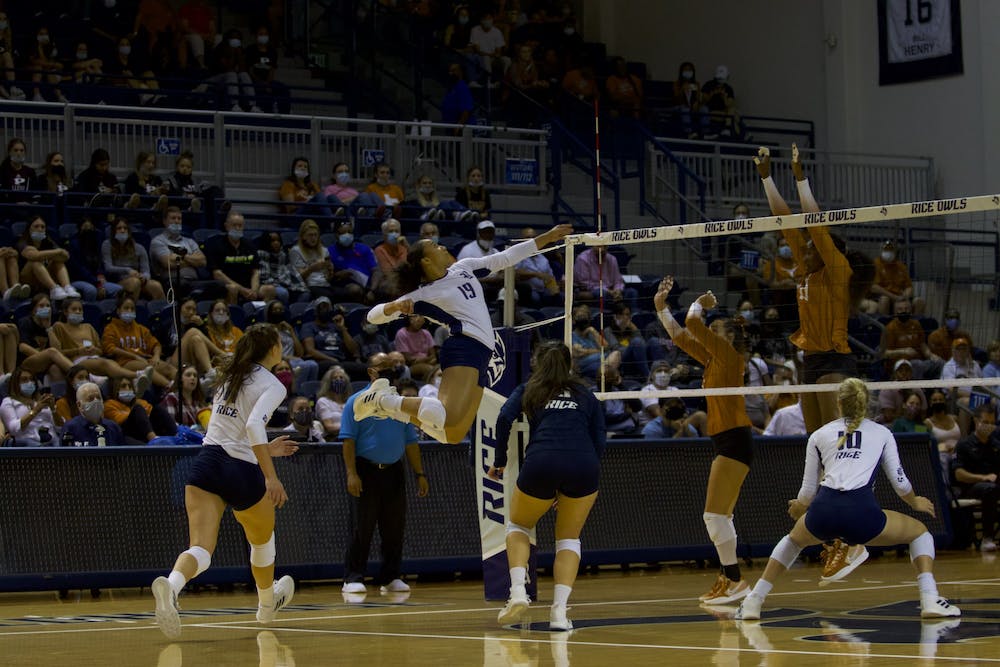 After going 17-5 during the regular season, and undefeated in conference play, Rice volleyball enters the Conference USA tournament on Friday as the No. 1 seed in the C-USA West on a 12-game win streak. On Friday, the Owls look to build upon their momentum in the first round, when they play the University of North Carolina, Charlotte.

According to head coach Genny Volpe, the Owls have set their sights high.

“Our goal for the C-USA tournament is of course to win the championship, but we know that it will take three solid performances, and we cannot look ahead,” Volpe said. “We must take each set one at a time, and just continue to focus on one play at a time.”

“Our biggest opponent is our first opponent,” Volpe said. “You cannot look too far ahead. So all the focus is on Charlotte at the moment.  There are a few teams that can make noise in this tournament, but we will definitely take this one point at a time.”

Junior setter Carly Graham, who won her sixth career C-USA Setter of the Week last week, said that she finds the postseason one of the most thrilling parts of playing volleyball.

“We are excited to enter the postseason where everyone’s backs are up against the wall,” Graham said. “The postseason is always super exciting.”

According to Volpe, in order for the team to remain successful and competitive in the C-USA tournament, the Owls will have to stick to the basics and play to their strengths.

“I believe that we can be successful if we continue to play our game the way we know how to,” Volpe said. “We need to attack our opponent with balance, serve tough, and continue to out defend our opponents, and we will be in good shape.”

The Owls began the season with a 5-5 record in their non-conference schedule, which featured four games against teams ranked in the top 15, before rebounding to go undefeated in conference play. According to Volpe, the Owls regular-season experience against top-ranked teams like the No. 2 University of Texas, Austin, No. 3 University of Pittsburgh, and No. 7 Baylor University will prove important since it gave the team a chance to identify their strengths and improve on their weaknesses.

“Entering the postseason we want to use all of our experiences from the preseason as well as conference play to our advantage,” Volpe said. “We have played so many different types of teams that have shown us our strengths, as well as exploited some areas we need to work on.”

After finishing as the C-USA runner-up two years in a row, the Owls hope that this year’s C-USA tournament will bring them their first conference championship since 2018. Last year, after going 14-4 in the regular season and ranked No. 24 in the nation prior to the postseason, the Owls swept both of their opening matches, before falling to the Western Kentucky University in the C-USA championship game. The Owls also lost to the Hilltoppers, who enter this year’s tournament ranked No. 18 in the country and as the No. 1 seed in the C-USA East, in the previous season’s conference championship game.

Although revenge is not necessarily on the team’s mind this season, according to Volpe, the Owls will want to use their talented roster to finally get past their conference rivals.

“From my perspective, we never focus on revenge,” Volpe said. “But we definitely want this championship and know we have what it takes to win it all. This group is really special and I believe we are all on the same page.  We want to take things one step at a time and make noise in the NCAA tournament.”

To kick off the tournament, the Owls will face off against Charlotte, the 4th seed in the East Division, on Nov. 19 in the quarterfinals of the C-USA tournament in Norfolk, VA.