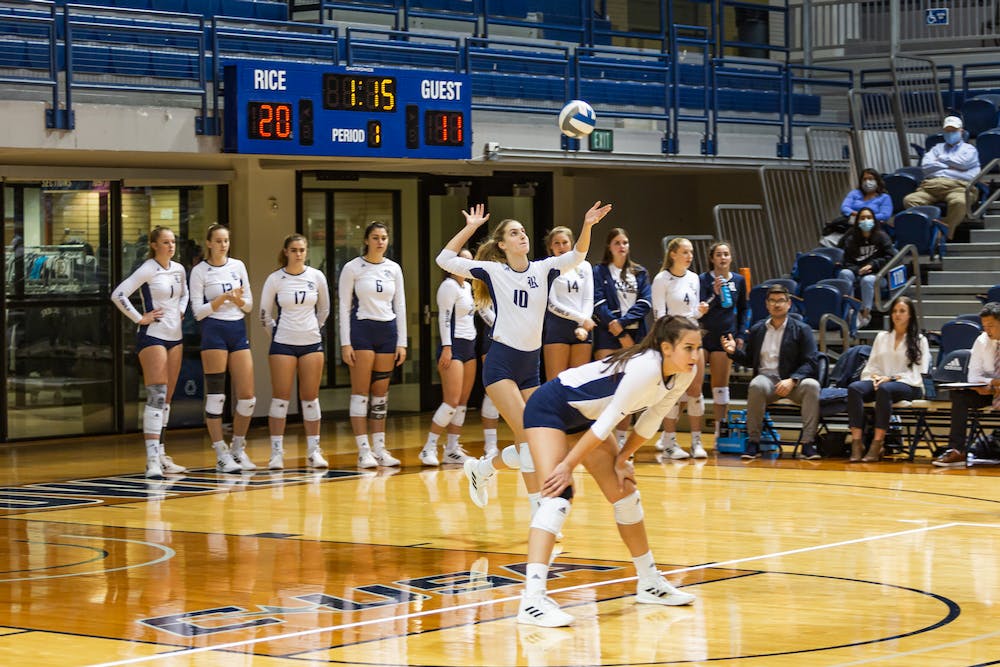 Ending their regular season on a strong note, Rice volleyball swept the University of Texas, San Antonio in their two-game series over the weekend at Tudor Fieldhouse. The Owls took all three sets in both matches against the Roadrunners, as Rice completed their second straight undefeated conference season and earned the No. 1 seed in the west division in the Conference USA tournament later this month. After closing their regular season with a 12 game win streak, head coach Genny Volpe said she was happy with the team’s improvement throughout the season.

“​I’m really proud of the team and the coaching staff,” Volpe said. “We’ve been working on certain aspects of our game at practice and just constantly trying to improve and we did that in both these matches. We talk all year about being the best versions of ourselves and constantly striving to improve and this group has really embraced that.”

Friday’s game was never particularly close. The Owls got off to a fast start, winning the first set by a score of 25-13, and kept the game out of reach, winning the next two sets in convincing fashion as well. Sophomore outside hitter Ellie Bichelmeyer led the team with 16 kills on a .519 hitting percentage, while junior setter Carly Graham contributed 46 assists.

In addition to the win, the Owls also celebrated senior night on Friday as they honored senior outside hitter Nicole Lennon, along with defensive specialists/liberos Tia Grippo, and Elizabeth LaBue. According to Lennon, senior night was a very special night as she was able to reminisce about her memorable five years as a member of the volleyball team.

“Senior Night was surreal for me,” Lennon said. “My 5 seasons have flown by so fast & they have been so fun and rewarding. I look back at my time at Rice very fondly; I’ve made so many memories with my friends and my team, and we have accomplished big things. I couldn’t have asked for a better experience here.”

Saturday’s game was more of the same as the Owls once again won each set by at least six points. This time Lennon led the team with 15 kills, and the defense stepped up, with four players reaching double-figures in digs.

With Saturday’s win, the Owls brought their record to 17-5 on the season. Lennon said that the end to the regular season was a successful one as the team played with passion, which translated into success on the court.

“I think in our last two home games our team really played with [a] fire,” Lennon said. “We just had fun playing volleyball, and that is reflected in our performance.”

Next up for the Owls is the C-USA tournament, where Rice will likely look to avenge their loss to the Western Kentucky University Hilltoppers in last season’s C-USA Championship match. According to Graham,  who was just named C-USA Setter of the Week for the fourth time this season, the weekend series against the Roadrunners was critical in making the Owls more confident as they enter the postseason.

“With this being our conclusion to the regular season we wanted to have some good momentum going into the C-USA tournament which I think we achieved,” Graham said. “We were super intentional going into this weekend. We have been practicing on improving certain aspects of our game, [and] I think we did a great job of that this weekend.

“My team is 100 percent confident that we can win the whole thing,” Lennon said. “We have been waiting for our chance against some of our East Division opponents, and we are extremely motivated to earn the automatic bid to NCAAs after the tragic end of our season last year.”

The team will play next at 11 a.m. on Nov. 19 in the first round of the C-USA tournament, where the Owls will face off against the University of North Carolina, Charlotte at a neutral site in Norfolk, VA.