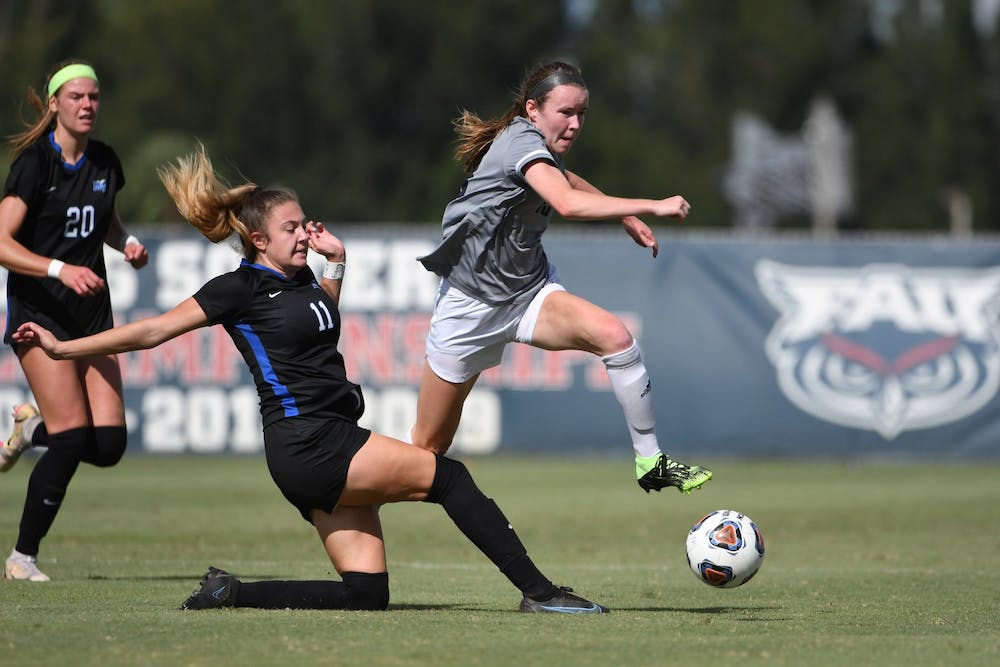 Rice soccer couldn’t survive their sixth straight overtime game last Wednesday morning, as they fell to Middle Tennessee State University in penalty kicks in the first round of the Conference USA tournament. The loss brought an end to a season that began with the Owls’ being nationally ranked entering the year for the first time in program history. According to head coach Brian Lee, while he is disappointed in the way the season ended, he always knew that last season would be a tough act to follow.

“The expectations outside the program were probably a little high for this fall,” Lee said. “Last season was [such] a huge step forward, so maintaining that was going to be difficult.”

A quiet first half for the Owls saw them take the defensive, as MTSU outshot them 7 to 4, but they weathered the MTSU attack to keep the game scoreless. The second half was more evenly fought, with the teams trading shots before Middle Tennessee got off two shots from close range in the 77th minute, but junior goalkeeper Bella Killgore saved both to keep the Blue Raiders off the scoreboard. Rice got one last look at goal, but an 83rd minute attempt by freshman forward Vyvienne Spaulding was saved and the game went to overtime. According to Lee, with the way the game was going, it was going to prove difficult for either team to break the tie.

“Defensively, [we were] outstanding,” Lee said. “We just weren’t super fluid in attack. The game seemingly was going to be decided [either] by set pieces or a shootout.”

In the first overtime period, each team managed just one shot attempt across the ten minute period. The second overtime was more of the same, as each team took one shot, but neither found the net, sending the game to a penalty shootout. According to Lee, the team was confident going into the shootout.

“We practiced penalties a lot, from the beginning of the season on, so we were really confident in our shooters, and in Bella’s ability to make a save or two,” Lee said.

In penalties, Rice took an early lead after junior midfielder Delaney Schultz converted the Owls’ first attempt, and the Blue Raiders couldn’t match. Killgore missed the second attempt of the shootout for the Owls, giving MTSU a chance to tie, but they couldn’t take advantage. The teams traded goals in the next two rounds, but freshman midfielder Catarina Albuquerque missed the would-be clincher, and the Blue Raiders converted their fifth kick to force an extra round of penalties. Sophomore midfielder Shiloh Miller missed the Owls sixth kick, and MTSU’s Alayna Lynchard sent her shot past Killgore, giving the Blue Raiders a 4-3 win in the shootout.

With the loss, the Owls were eliminated from the C-USA tournament, ending their chances of defending their conference title from last season and following up their run to the sweet sixteen of last year’s NCAA tournament. According to Lee, the team simply didn’t get the breaks that they had on their tournament run last season.

“If you look at last season, we got a lot of breaks,” Lee said. “And this season we were on the wrong side of a lot of breaks. The breaks didn’t go our way, when the margin for winning and losing is really close. Last season we won all of those games, so it really just balances out.”

The Owls started the season where they left off last year, going undefeated through their first seven games. But since their first loss of the season in mid-September, the Owls went 4-5-1 to close out their regular season before Wednesday’s loss. According to Lee, the drop off halfway through the season was in large part due to injuries, as the team lost all-American defender Mijke Roelfsema, along with sophomore forward Shelby Desroches who had been starting on defense.

“When Shelby went out at the back, that was the first significant dent,” Lee said. “[As for Roelfsema], if you’re going to lose a first-team all-American, she wouldn’t be a first team all-American if it didn’t matter. That’s probably where it started.”

The Owls had a knack for getting themselves into close games all year long; 15 of their 18 games were decided by one goal or less. This trend picked up in conference play, where six of their nine games went to OT. According to Lee, the team had trouble separating from their opponents and their record ended up reflecting that.

“It’s six straight overtime games from the day Mijke went out,” Lee said. “That leveled the playing field quite a bit in our conference. We went 2-2-2 in the overtime [games]. Any time you go to overtime it’s gonna be a bit of a crapshoot and that’s what the results said.”

Despite the early end to their season, Lee said that he was happy with how the team’s defense stepped up after their injuries, as well as the play of junior midfielder Delaney Schultz, who contributed nine goals and seven assists, earning her C-USA player of the year honors. However, Lee said that the team’s lack of cohesion on offense was too much to overcome.

“I thought our group defending was really good no matter who was playing,” Lee said. “Delaney’s progression was another big factor. But we never could get the right groupings of players and get enough rhythm in attack.”

Going forward, Lee said that he won’t let Wednesday’s result get in the way of the trajectory of the program. While they lose Roelfsema and senior defender Caleigh Page, who was named third-team all C-USA, they will return the vast majority of the team. According to Lee, after a shortened offseason last year, the team will have plenty of time to improve before next season.

“We still have a super young team,” Lee said. “We’ll have a real offseason. We have so many young kids who have never had an offseason where they can really work on getting better and stronger and fitter and faster, so we’re excited about that.”