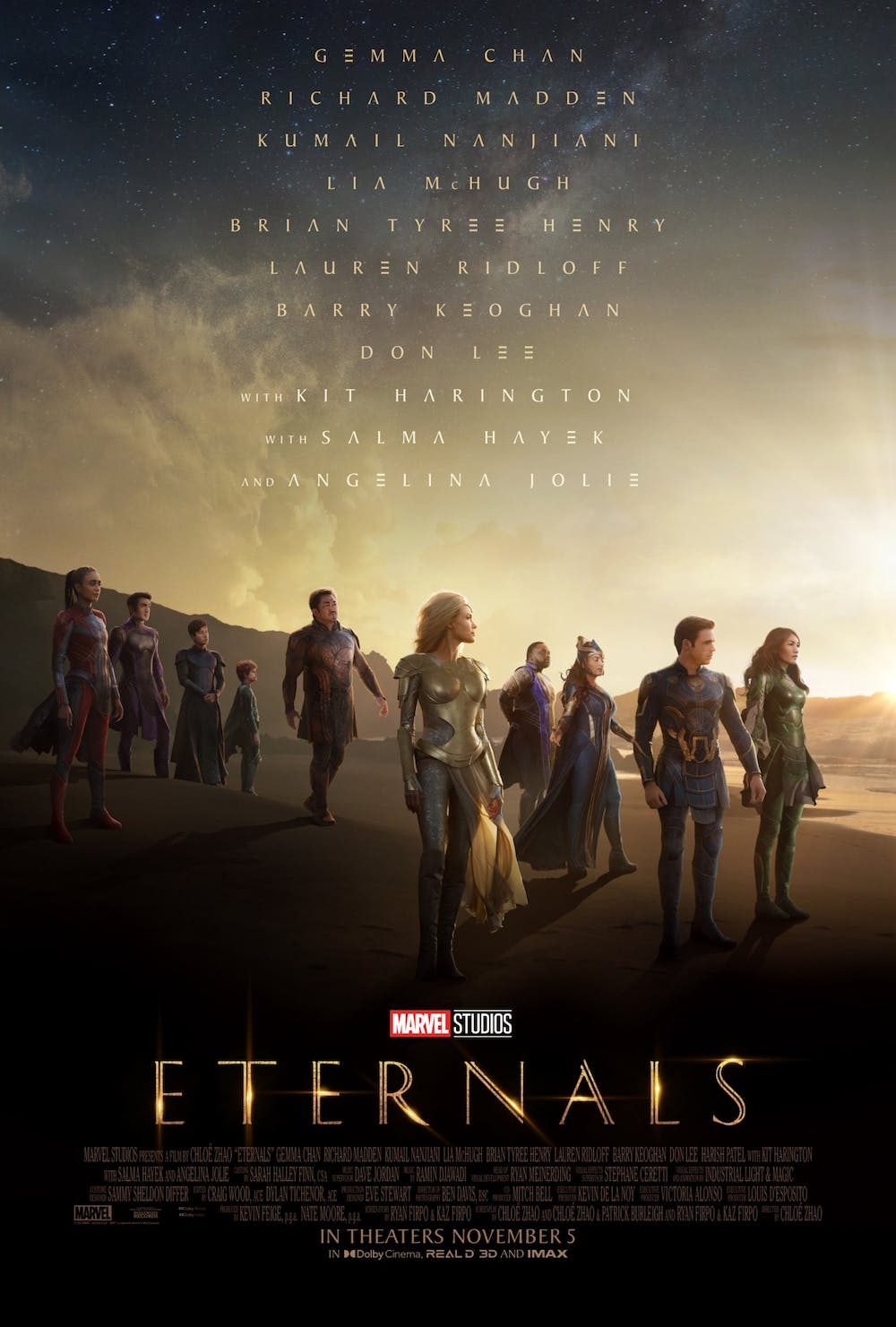 With a cast full of stars or soon-to-be stars and a director coming off of multiple Oscar wins (Chloé Zhao), “Eternals” was a movie brimming with promise. Unfortunately, audiences were delivered a congested and dissonant epic which struggles under the weight of its ambitions. “Eternals” is not without its strong moments, but this is a movie that got away from Zhao and Marvel.

“Eternals” follows a group of immortal beings called the Eternals who have secretly lived on Earth for thousands of years, aiding in human development and offering protection from a group of monsters known as Deviants. Each Eternal, of which this movie has ten, has their own set of powers, which quickly become evident through expositional fight scenes.

The movie is primarily set in modern times as the Eternals battle the Deviants (and, like with most superhero movies, the potential end of the world). Given the large time span that must be covered to introduce audiences to these characters, the plot ended up overwrought. I’m generally skeptical of the argument that a long movie should just become a miniseries, but “Eternals” certainly would have benefitted from such a change. This movie’s runtime is 2 hours and 37 minutes, and it probably needed twice that.

Perhaps most important in this movie is familizaring the audience with characters set to return in future installments. “Eternals” is buoyed by a skilled and diverse group of actors amidst an overly ambitious story. By choosing to focus on ten Eternals, however, each character doesn’t get the time they need to develop. One Eternal dies very early on, and it carries no emotional weight whatsoever.

Having such a large main cast carries the additional gamble that the best characters could be relegated to the sidelines, with some of the Eternals underused and others barely used at all. Phastos (Brian Tyree Henry) and Druig (Barry Keoghan) are locked in a battle over who is better at stealing every scene they’re in, yet both operate in the periphery of the plot. Kingo (Kumail Nanjiani) is another strong character that served as a too fleeting source of comic relief alongside his hilarious valet Karun (Harish Patel).

Instead of focusing on its usually stellar supporting cast, the movie centers on Sersi (Gemma Chan) and Ikaris (Richard Madden). Chan’s acting is solid but unremarkable, while Madden opts for a jaw-clenchingly stoic performance verging on wooden. Neither actor offers a performance as charismatic or engaging as their supporting cast, though, making Sersi and Ikaris a dissatisfying focal point of “Eternals.”

Chan and Madden also approach the movie with a soberness that seems as if they are in an entirely different movie from the other actors playing the Eternals. Zhao is a very particular filmmaker, while Marvel is a very controlling studio. It feels like each approached “Eternals” with incompatible visions. Nanjiani’s performance is perhaps the best example of this, not feeling like a cohesive part of the movie so much as a decision Marvel made to inject more of the humor audiences have come to expect from the studio’s movies.

Marvel commonly employs a strategy of hiring indie filmmakers to direct big projects, and it has mostly excelled. Zhao might have been an auteur too far for Marvel, though, leading to the sharp stylistic dissonance frequenting this movie. While “Eternals” was an attempt to stray from the typical Marvel movie, it appears the studio didn’t fully let Zhao take down the guard rails. Nevertheless, although “Eternals” was a swing and a miss, I like that Marvel is swinging.