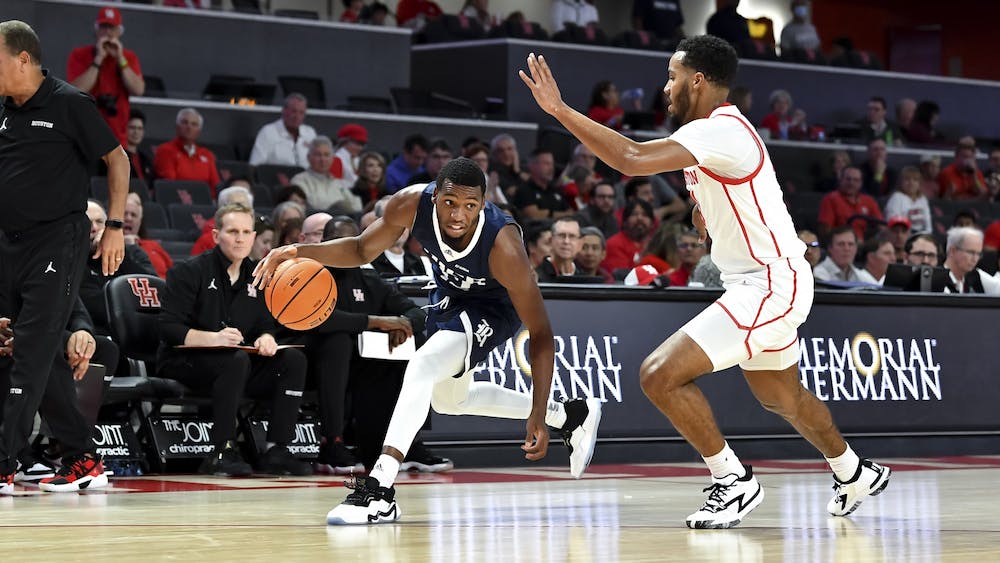 On Friday, Rice Men’s Basketball traveled down the road to the Fertitta Center to face off against No. 15 University of Houston. In the first battle between the Cougars and the Owls on the court since 2019, Houston emerged victorious 79-46, extending their winning streak against the Owls to seven.

After starting their season with a 19-point win over Pepperdine University last Tuesday, the Owls started the game with a dunk courtesy of graduate transfer guard Carl Pierre. From there, the game went downhill with multiple unanswered runs for the Cougars. The Owls fell behind early and faced a 29-point halftime deficit. They played a closer second half, thanks to 10 second-half points from freshman guard Cameron Scheffield but were unable to close the gap. After the game, head coach Scott Pera said that Houston did all the right things needed to dominate the game.

“I just want to say all the credit goes to Houston,” Pera said.  “They were well prepared, ready to play and we couldn’t dig ourselves out of the hole. Against good teams on the road, that’s hard to do. They shot it well, they did what they do defensively. They really pushed us out high on the floor. Our shots were quick. I thought that would be the game plan and that we would handle it better … but we didn’t handle it like I hoped.”

The Cougars were especially dominant on the defensive end and controlled the flow of the game, according to Pera, where they held the Owl’s offense to 28.0 percent from the field and 25.8 percent from three.

“They were able to do whatever they wanted to do all night,” Pera said.  “We had a lot of resistance and we didn’t have a lot of attack on offense to counter it and get what we wanted. When things snowball like that against a good team, it is hard to win.  We couldn’t answer the punches early and the knockout came early.”

Going into the game, the Cougars were ranked No.15 in the AP Top 25 poll after making it to the NCAA Final Four during the 2020-2021 season. According to Pera, the Owls knew they needed to step up to pull off the upset, but were unable to rise to the occasion.

“I have great respect for [their team],” Pera said. “They are very very good. You know what you’re gonna get when you play them and you better tighten the shoelaces and be ready for a 40 minute battle. Tonight we were looking forward to playing them and for whatever reason our guys didn’t respond when we got hit early and it got out of hand.”

Although the score at the end of the game was lopsided, according to Pera, there were still positives to take away from strong performances by Scheffeild and sophomore guard Jake Leippert.

“I’m really proud of Cameron Sheffield,” Pera said. “He really competed and did some good things. He didn't worry about the score and played the game the right way. Jake Leippert, now two games in a row, has given us some quality minutes.”

Another positive take away from the game was playing in front of a strong crowd, which Pera said will help prepare the team for some of the big games on their schedule.

“For the first time in 2 years we played in front of 7000 fans,” Pera said. “We're going to go on the road and play some very good teams like [Texas], and great [Conference USA] teams.”

After making just eight of their 31 attempts from behind the arc, the Owls will look to get their three-point shooting back to its level from last season, when they led the conference in made three pointers. After struggling from beyond the arc in the first two games, Pera said he is not worried about the team’s shooting struggles.

“We need to get Quincy Olivari healthy,” Pera said.  “He’s one of the top-ten returning three point shooters in the country but his wrist is bothering him and that is evident. Other than that, as long as we get the right guys shooting the right shots, we're going to shoot them and I’m confident that Tuesday night we will be back and try to be who we are.”

Going forward, the Owls have a plethora of non-conference games including the Gulf Coast Showcase and an away matchup against the No. 8 University of Texas, Austin. In regards to the loss, Pera said that the Owls will learn from the experience but put it behind them so they can focus on the rest of the season.

“We are an older group now and a more mature group,” Pera said. “We need to handle [this loss], come together and be better. We're going to take the good things away from the game but at the end of the day, we're going to flush it and move on and get ready to play Tuesday night.”