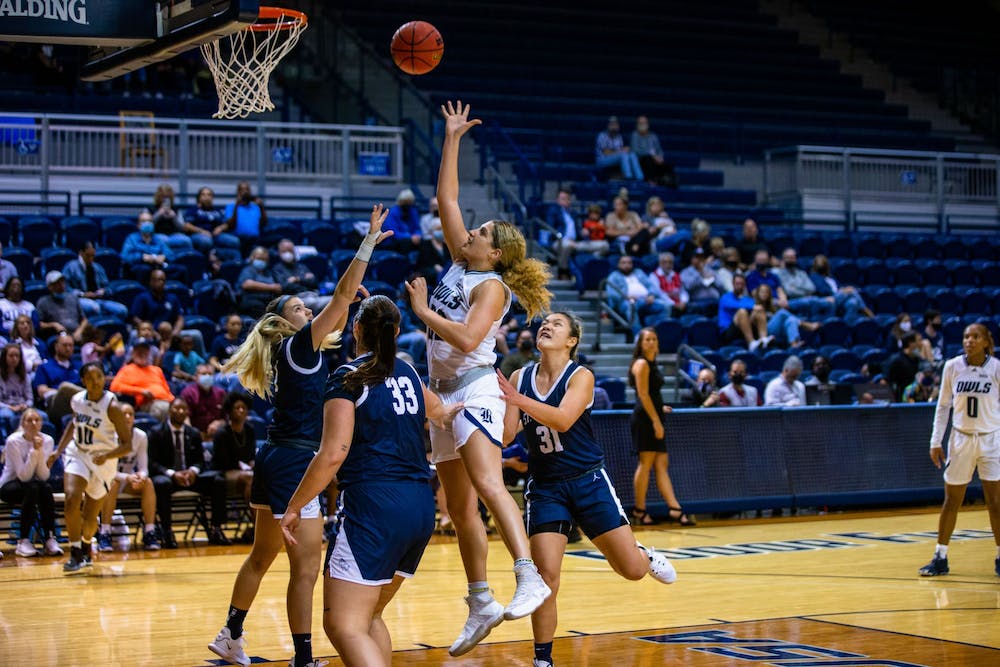 Rice women’s basketball kicked off their season under first-year head coach Lindsay Edmonds last Tuesday night with a win against St. Edward’s University, before dropping their second game of the season to University of Louisiana, Lafayette on Saturday. These were the first games in charge of the Owls for Edmonds, who spent her last eight seasons as an assistant at North Carolina State University.

Replacing former head coach Tina Langley, who is now the head coach at the University of Washington, is no easy task. Under Langley’s watch, the Owls became a perennial postseason team and Langley left Rice with the highest winning percentage in program history.

The departure of Langley was followed by four starters entering the transfer portal. However, Tuesday night provided an opportunity for both Edmonds and her players to prove that the Owls could still be competitive, even without much of last year’s WNIT championship team.

Starting an entirely new five from last year, the Owls got out to an early lead in the first quarter led by freshman forward Malia Fisher. The Owls defense stifled the Hilltoppers, holding them to 2-13 from the field in the opening period. According to Edmonds, Fisher was key to the Owls getting off to their fast start.

“Malia is a very special player,” Edmonds said. “She is very athletic and hasn’t even truly tapped into her full potential yet, so she is an exciting player that does a lot of things that make you go wow, and that first quarter showed it. I thought she came out with great energy, great effort and really got us off to a great start.”

Following a commanding 23-4 lead to end the first quarter for the Owls, their defense paved the way as they continued to give the Hilltoppers fits on offense. The Hilltoppers committed 25 turnovers while shooting only 25.5 percent from the field, which included not making a shot on 11 attempts in the final quarter.

The Owls were led by sophomore forward Ashlee Austin, who made her first career start. Austin’s stat line of 18 points, six rebounds, four assists and three steals showed her versatility on both ends of the floor.

Redshirt freshman guard Maya Bokunewicz, who missed all of last year with a season-ending knee injury, provided 13 points in her first career start. Austin and Bokunewicz, who shared the court together for the first time during a game, flourished in Edmonds’ four out one in system on offense, according to their new head coach.

"I think that Maya and Ashlee had a little run there where they really trusted in that four-out-one-in system, and we got really great looks out of it," Edmonds said. "So hopefully they can see that on film and see that it’s been successful and continue to keep buying into what we’re looking to instill.”

The Owls finished the game shooting 51.6 percent, which came from 20 team assists, six of which were dished out by sophomore guard Destiny Jackson. Edmonds said she was particularly encouraged by the way her team moved the basketball on offense.

"Offensively, we share the basketball really well," Edmonds said. "Thirty-three made baskets and 20 assists, so we are looking for one another, we’re passing the ball to the open teammate, we’re knocking down shots, so that’s definitely encouraging. I think overall, the gel is happening. It’s going to continue to happen as we go, I don't expect it to be perfect on the first night, but I thought we looked pretty good out there for the majority of the game.”

As the final buzzer sounded, Edmonds had secured a resounding 84-41 win in her debut at the helm of the Owls.

The Owls followed up their home opener when they hosted the Ragin’ Cajuns of the University of Louisiana, Lafayette on Saturday night.

However, the Owls built a 33-22 lead at the half as their defense held the Ragin' Cajuns to only eight points on three of 13 shooting from the field in the second period. The Owls maintained their double-digit lead entering the fourth quarter as the Owls led 53-41.

"I think the number one thing I'm disappointed in is our defense," Edmonds said. "We talk about holding opponents to 30 or less in a half, and we allowed them to score 32 in the fourth quarter alone, so we’re not going to win a lot of basketball games if we can’t defend better than that.”

The Owls could not stave off the Ragin’ Cajuns comeback as they lost in their second game 73-69.

The Owls were again led by Austin, who finished the game with a career-high 20 points to go along with her seven rebounds. Sophomore guard Kaitlyn Crosthwait, the lone returning starter from last year, got her first start of the season on Saturday and contributed 19 points and four rebounds.

This was the first close contest of the year for the Owls, one that Edmonds hopes will provide experience down the stretch for her team.

"We lost a lot of players that played in these crucial moments and knew how to navigate through those moments and how to have their poise and finish plays," Edmonds said. "So we’re going to get there. We are a very young team experience-wise, so again, I think some of the mistakes we made down the stretch hopefully we’re not making them in conference play, and we’ve learned and grown from that."

The Owls will look to get back on track Wednesday night when they host Texas Southern University at 6 pm.