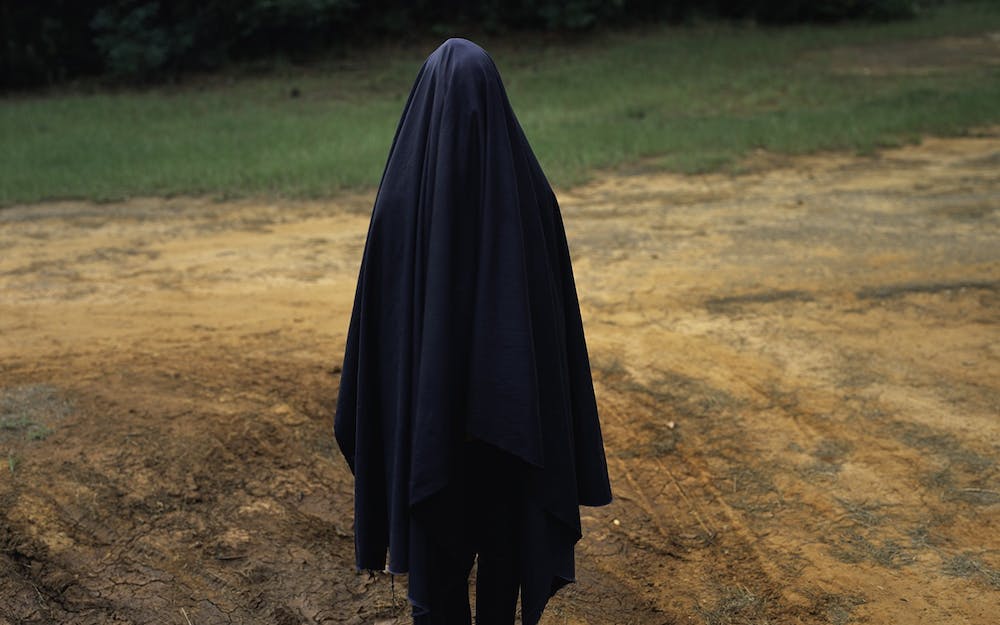 The “Dirty South,” an art exhibit on view at Houston’s Contemporary Arts Museum from Nov. 5 to Feb. 6, 2022, claims a nickname with roots as murky as the bayous. By the time Goodie Mob christened their home the “dirty south,” the term had been claimed for farmers, crooks and the poor. Perhaps the term “dirty south” reclaimed Northern snootiness or perhaps the distorted 808 kicks sounded like “dirty” grunge guitars. However, when “Dirty South” curator Valerie Cassel Oliver notes that the walls of the first section of the exhibit are colored the same as the clay-heavy soil of the south, it clicks for me: “dirty” is literal. This is the story of dirt.

My family arrived in Texas because of the dirt. My great-great-grandparents came from Germany to Central Texas for nutrient-rich soil and my grandfather was plucked from his small town in Virginia to the oilfields of Texas. But that’s not unique to my family. During the 1920s Dust Bowl, migrants came looking for ground strong enough to build upon. Before that, Black families were forcibly brought to Texas due to the loamy soil that made enslavement profitable. Before that, the Karankawa people of the Gulf Coast built their lives around the region’s marshy soil that led them to nomadism.

Visitors see this dirt from the start. Used in promotional materials and greeting visitors upon entrance, RaMell Ross’s photograph “Caspera,” represents many of the exhibits themes. A ghostly figure draped in a black sheet standing barefoot upon the distinct clay-tinged dirt of the American South literally and figuratively centers totalizing Blackness upon the multicolored dirt. Not only does the soil provide the literal base, it creates the point of contrast to the central Blackness of “Caspera.”

The dirtiness of the South remains particularly salient throughout the “Landscape” section, the first of the three divisions in the exhibit. Mildred Thompson redefines landscape painting by the trees that grow upon it. Michi Meko traces a cosmology from the ground into the sky with fireflies, spider webs and fractals. This is the base that the rest of the exhibit builds upon.

The walls shift from red to a light blue traditionally painted under porches to ward off spirits for the second section, “Spirituality.” Like the porch and the dirt it rises above, the landscape and the spiritual constantly converse. The spiritual materially introduces itself with the striking tower of speakers that composes Nadine Robinson’s “Coronation Theme: Organ.” The work’s structure both references the pipe organ associated with Black spirituality and musicality as well as the Ebenezer Baptist church that Dr. Rev. Martin Luther King preached at. The speakers, reverberating subs of sound collages, show music as a spiritual predecessor and form of resistance.

The visually striking conclusion of this relationship presents itself in the iconic “Asterisks in Dockery (Blues for Smoke),” a beckoning recreation of the church pews at Dockery Farms. Artist Rodney McMillan covered the entirety of the structure with blood-red vinyl panels, both as a repudiation of the European Christian obsession with whiteness as purity and a tongue-in-cheek contrast to the Delta blues music that originated at the Dockery. Traveling musicians would always stop at Dockery Farms due to the large number of Black workers working the fertile soil in the area. It was this Southern dirt that brought through iconic musicians and led to spirituality seeping through the delta waters.

Stark staircases beckon audiences down to the basement for the third section: “The Black Body.” Upon arrival, the record scratching of Robert Earl Davis dances through the room from the Cabinet of Wonders and El Franco Lee II’s “DJ Screw in Heaven 2” seems to light up, honoring the legend. The various circular pieces of art are records just waiting to be slowed and throwed.

Out of all the sections, “The Black Body” feels most influenced by its physical location. Whereas the first floor lets viewers distance from the art, the basement places the audience directly within it. This usage of place, then, is a commentary on how the body becomes constrained by and thus defined by its location. Deborah Roberts’s chilling “Let Them Be Children” concurs, as does the shoe shining stand across from it, that bodies become their positions.

The section culminates with the haunting exhibit closer “Love Is The Message, The Message Is Death.” Arthur Jafa’s brilliant collage of Blackness invites and dares the viewers to draw their own conclusions. MLK, Kanye, shining stars, twerking, police killings, IceJJFish, Birth of a Nation, rodeos, graves, Lebron James with the breakaway slam. This is a god dream? The piece ends and the theatre goes black for a good while.

The “June 27th Freestyle,” a legendary relic of the city’s lean-coated nineties, featured nine different artists. Samples and references from June 27th have proliferated through everyone from Paul Wall to Drake. Rap songs are just like that in the South, plucking lyrics and sounds from each other, creating a distinct layer of history for those ingrained in the culture.

The “Dirty South” encapsulates both this sense of grandiose scope and unshakable history. It’s the most ambitious exhibit I’ve seen at the CAMH, but it has to be. There’s simply no other way to capture the South. It’s slow, loud and banging just like the cars at MacGregor, and Cassel Oliver not only understands that but manages to capture it within the context of the modern art institution.