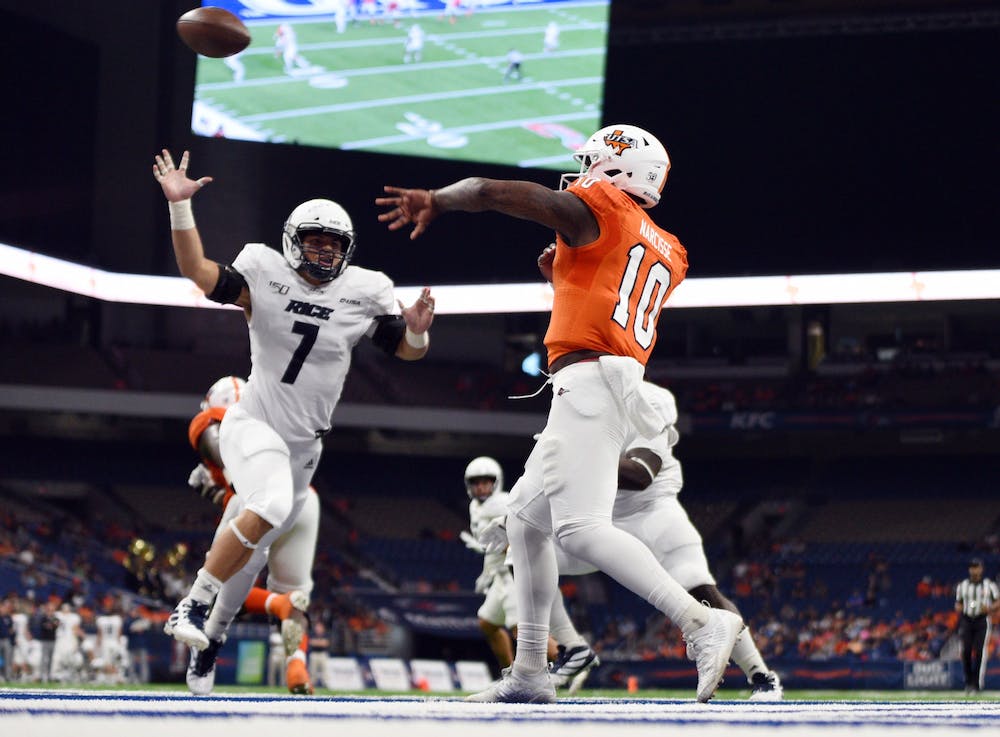 On Saturday, Rice football will hit the road to take on Conference USA rival University of Texas, San Antonio. The Owls (2-3 overall, 1-0 conference) look to continue their two game win streak with an upset over the undefeated Roadrunners (6-0).

After a rough start to the season, with early losses to the University of Arkansas, University of Houston and the 58-0 blowout against the University of Texas, Austin, the Owls bounced back with a win against Texas Southern University and their first conference opponent, Southern Miss. This past week, Rice had their bye week and was able to rest up and prepare for this week’s match. In the weekly press conference, head coach Mike Bloomgren said he was happy about how the bye week went.

“It was a great week because we were able to get healthier,” Bloomgren said. “We got some guys back [from injury] and we got young guys some work. It allows us to move some of them up the depth chart and get them more involved this year.  We got exactly what we wanted from this bye week.”

The two teams are especially familiar not just because of the conference rivalry, but also because they play just a few hours from each other. Bloomgren said that being an in-state rivalry as well as a conference matchup makes the game even more exciting.

Offensively, the Owls have been led by graduate quarterback Jake Constantine, who is 2-0 since taking over the offense, and redshirt senior tight end Jordan Myers who leads the team with four rushing touchdowns and adding on a receiving touchdown.  Out wide, sophomore wide receiver Jake Bailey and graduate wide receiver Cedric Patterson III have racked up over 200 yards receiving each. Defensively, the Owls struggled for the first few weeks this season, but rallied against Southern Miss to only allow 19 points. Bloomgren was pleased with how both sides of the ball are progressing.

“It’s been great to see our offense take steps forward and continue to build,” Bloomgren said. “Our defense also took a big step forward in the last game and has been able to build off it [in the bye week].”

UTSA, who finished second in the C-USA West region rankings last year, is looking to improve on that finish with an impressive 6-0 record with two conference wins against the University of Nevada, Las Vegas and Western Kentucky. The Roadrunners are led by last year’s C-USA Offensive Player of the Year, junior running back Sincere McCormick. McCormick leads the team in rushing with 661 yards and six touchdowns in six games. At the quarterback position, senior Frank Harris has completed 69.8 percent of his passes for 1,475 yards and 12 touchdowns.  Bloomgren acknowledged that the Roadrunners are led by dangerous playmakers that are hard to stop.

“Offensively it all starts with Sincere [McCormick],” Bloomgren said. “He’s such a great runner. He’s as productive a running back as any running back in our conference.  The biggest change I’ve seen since their last game is the growth of their quarterback, Frank Harris, who is playing like a pro. They are from top to bottom, an outstanding football team.”

On the defensive side of the ball, the Roadrunners are led by safety Rashad Wisdom, a first-team all conference honoree a season ago. Bloomgren had high praise for the well-coached defensive squad as well.

“They have an outstanding defense,” Bloomgren said. “On film, I see a bunch of guys who can dazzle people with their dance. They do such a great job with their hands and their safeties are so active. Our conference hasn’t seen a defence like this since the 2018 UAB team. It is a dominant, old, veteran group.”

In recent memory, the Roadrunners have dominated the rivalry, winning the past five matchups, with the most recent being a close 31-27 defeat for the Owls in 2019.  Rice will look to stop their losing streak against UTSA and continue their own two-game winning streak while proving that they can beat a C-USA contender. Although it will be a tough matchup, Bloombgren believes that the team is prepared for the challenge.

“This weekend we play a very experienced and tough UTSA football team,” Bloomgren said. “They are the top team in our conference and they are sound in all three phases. They bring a lot to the table and they are a good football team.  I am confident in the way that the team has been preparing thus far and I know the team shares the same excitement I do about playing in San Antonio this weekend.”

The game starts at 5 p.m. on Saturday and can be viewed on ESPN+.