Soccer needs overtime to get past struggling UAB 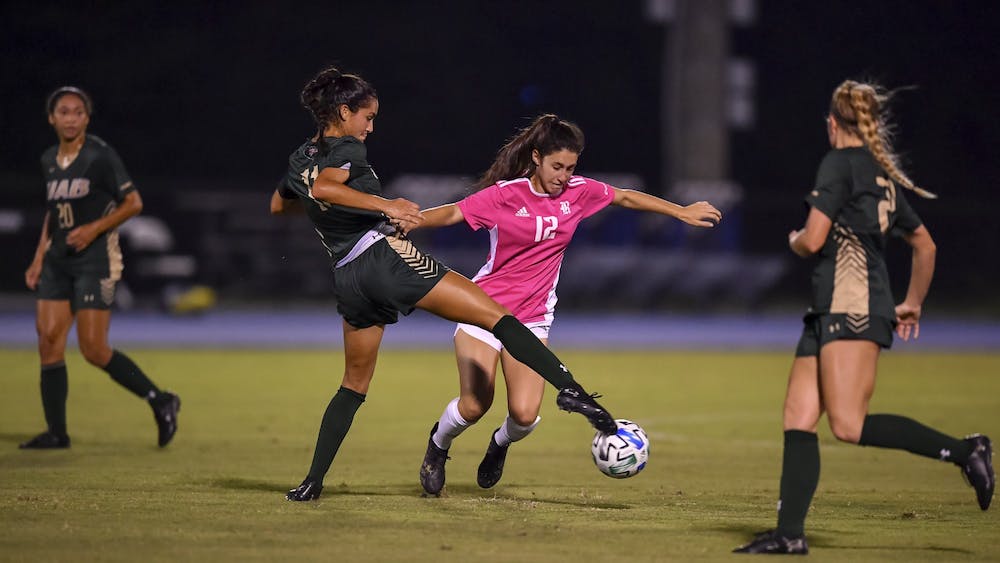 The Rice women’s soccer team improved their season’s record to 9-3-1 and 3-1 in Conference USA after beating the University of Alabama at Birmingham in a hardfought overtime battle on Friday. The victory at Holloway Field improved the Owls to 2-1-1 in overtime matches this year. After the game, head coach Brian Lee said that the team always has to be prepared to win close games, especially against conference competition.

“Conference games especially are going to be tight,” Lee said. “[Sometimes] college soccer is just one one-goal game after another.”

Rice had a frustrating start, which saw across from junior midfielder Serena Pham headed in by freshman forward Vyviene Spaulding, only to get called off for offside. Spaulding was very close to scoring again in the 12th minute, but a UAB defender blocked her before the ball reached the goal. Despite early difficulties, Rice managed to score in the final minute of the first half thanks to a sequence starting with a throw-in from senior defender Caleigh Page to junior midfielder Delaney Schultz, who headed the ball to sophomore forward Izzy McBride, who then scored to give Rice the lead.

The second half of the game saw UAB come out with a vengeance, as they scored the equalizing goal just six minutes into the second half. UAB almost scored only a minute later, but freshman midfielder Carlyn Presley sent it wide and it was not to be. A number of unsuccessful efforts from Rice, including close misses from Page and Spaulding, meant that the game was headed for overtime.

Overtime was short-lived, however, as Rice put together a sequence in which freshman forward Natalie Gorji’s cross bounced off a UAB defender, giving Rice a corner. Pham sent the corner kick towards the front of the goal front, where Schultz scored her third game-winning goal of the season and converted with a header to send UAB home in the 92nd minute of the match.

Lee said he wasn’t wasn’t particularly impressed with his team’s play, but with Schultz’s last-minute goal, the team was able to rise to the occasion with the game on the line.

“It wasn’t our team’s best game,” Lee said. “You don’t have to play great, especially for Delaney [Schultz], if you’re a big time scorer, but she came away with a goal and an assist and got it done when it mattered”.

With the overtime winner, Schultz  tied Nia Stallings for the No. 7 most goals in Rice history and notched 58 career points, tying Stallings for No. 6 most all-time.

Lee also praised the team’s defense for stepping up after the season-ending injuries to sophomore Shelby Desroches and senior Mijke Roelfsema, an All-American last season.

“We really created a whole new back-four, with Shelby and Mijke’s season ending injuries,” Lee said. “Full credit to the whole backline but especially [junior midfielder Madison] Kent, back there playing center back for the first time in her career. I really thought for a starting point with a new back line, it was an excellent night.”

Rice’s backline helped limit UAB to one goal, even as Rice was outshot 16-8 overall and 8-2 in shots on goal. Also of note are Killgore’s seven saves, which helped Rice stay in the game despite the sizable shot attempt deficit.

The Owls’ will need a strong outing to get the win on the road against Southern Mississippi in next week’s match, as the Golden Eagles boast a record of 6-3-2 and an impressive home record of 3-1-0.