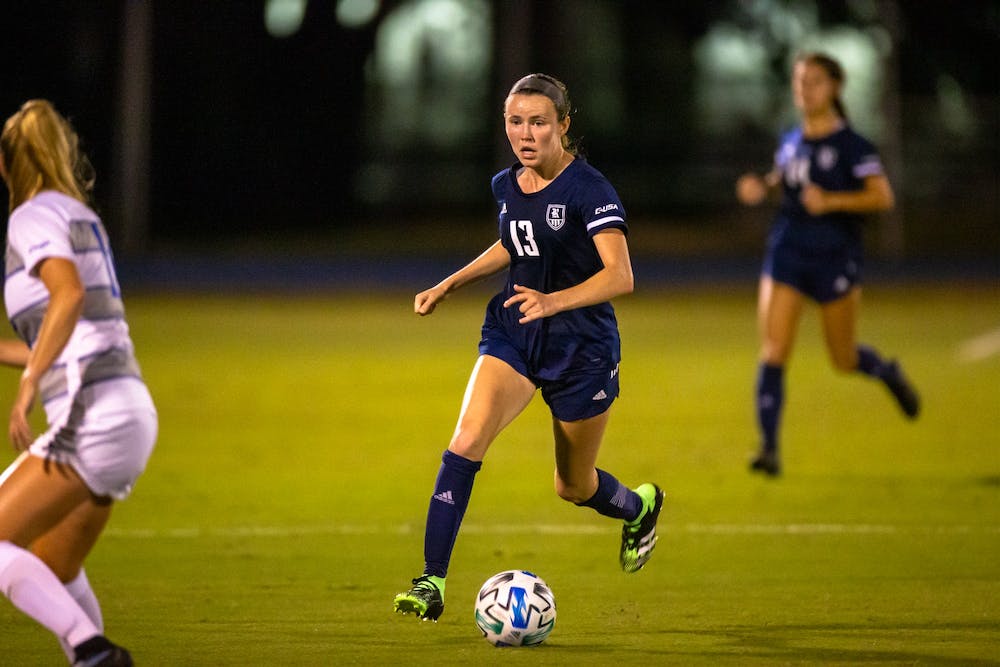 Junior midfielder Delaney Schultz sent Middle Tennessee State University home in the 102nd minute on Friday night as she headed in a corner kick in the match’s second overtime period, earning Rice a 2-1 win. The victory snaps a two game losing streak for the Owls and improves their record on the season to 10-5-1.

The game was full of fireworks, with junior midfielder Madison Kent shooting and missing three shots within the opening 12 minutes. Rice would finally break through in the 18th minute when freshman forward Natalie Gorji found the back of the net, off of a pass from sophomore midfielder Shiloh Miller. The 41st minute of the match saw junior goalkeeper Bella Killgore miss a chance to score by the narrowest of margins when her free kick bounced off the crossbar.

In his postgame comments, head coach Brian Lee said that everything was going right for the Owls in the first half.

“I thought the first half was fantastic,” Lee said.”That was certainly the best 45 minutes we’ve had all year, so hopefully that’s something we can pocket, rinse, repeat moving forward.”

The start of the second half saw the Blue Raiders take the field with a vengeance, getting off four shots in the first 10 minutes, but Rice weathered the storm to keep the score at 1-0. Middle Tennessee had a chance to tie the game in the 70th minute, when a foul was called on Rice in the penalty box, giving the Blue Raiders a penalty. However, Killgore had other plans, making a diving save to hold onto the lead. According to Lee, it took an outstanding effort from Killgore to prevent the goal.

“Bella’s very good at saving penalties,” Lee said. “I thought it was a decently taken penalty, just a great save from Bella.”

Undeterred, the Blue Raiders finally got one to go just four minutes later, when Cambell Kivisto scored to even the game. With the game tied 1-1, neither team scored in the final 16 minutes and the game went into overtime.

The first overtime was quiet, with the two teams only attempting one shot combined, but the second overtime was a different story. Rice earned a corner kick just two minutes into the period, and junior midfielder Serena Pham sent the kick towards the back post where Schultz headed the ball in, clinching the game for the Owls. Schultz’s effort marked her ninth goal this season and the 21st goal of her career, climbing in the Rice record books to fifth in single-season goals and tying for sixth in all-time goals. After the game, Lee said that Schultz’s goal capped a great all around performance.

“Delaney’s had a great season, I’d argue that that might be her best game,” Lee said. “I thought she was on all four corners of the field, and so dangerous in the box. Really unlucky in the first [half] not to maybe get two [more] goals.”

Rice concludes its regular season next Thursday, Oct. 28, when they travel to Denton, Texas to battle North Texas University.