Roadrunners run all over the Owls in San Antonio 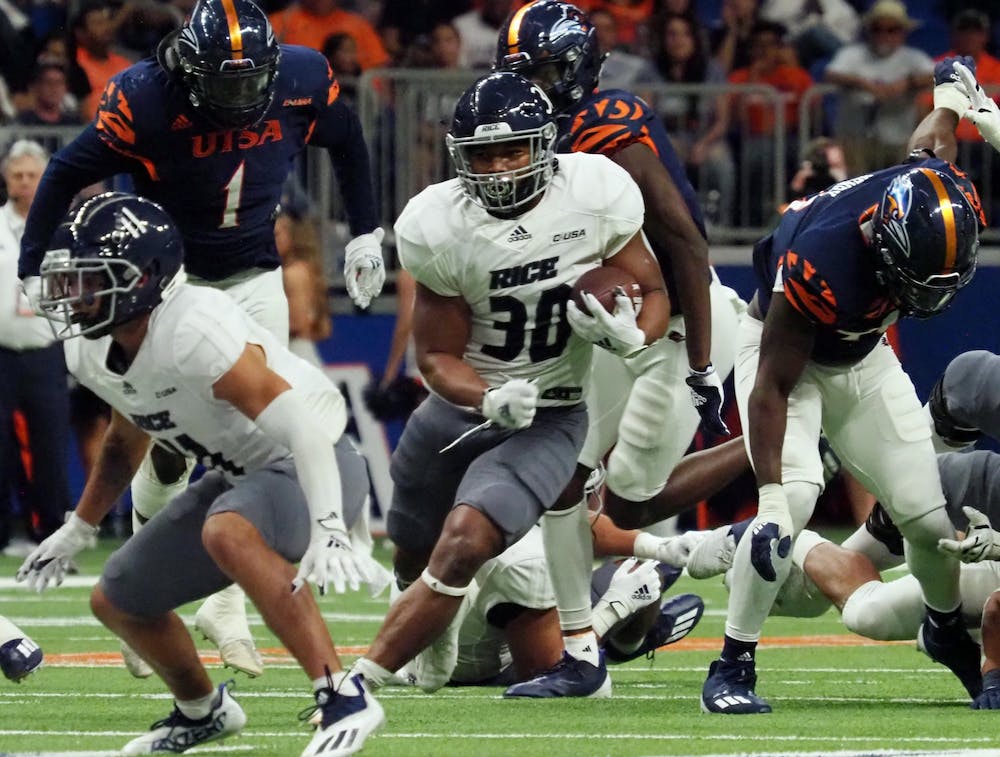 This past Saturday night, the Rice football team lost to the University of Texas, San Antonio by a final score of 45-0 in the Alamodome. After winning two straight games prior to their bye week, the Owls fell to 2-4 while the Roadrunners added to their undefeated season, sporting a 7-0 record. The most recent AP Top 25 Poll ranked UTSA as the 24th best team in college football after their win over the Owls on Saturday.

After the game, head coach Mike Bloomgren said that the team just got outperformed by a good Roadrunners squad.

“They beat us pretty good tonight,” Bloomgren said. “We got outcoached and out-executed; [we] had too many errors in our game, [we] made a lot of mistakes and we paid dearly for them against a very good football team. We have a lot of work to do if we want to continue to think about ascending as a program.”

Going into the game, Bloomgren believed the team’s momentum was indicative that the Owls were headed in an upward direction after two straight wins. However, Saturday’s loss, according to Bloomgren, showed that the team has a long way to go.

“The bye week allowed us to feel like we were in a great place,” Bloomgren said. “Coming off of two wins, we felt that we were taking positive steps. Tonight was certainly not a positive step. Coming out of the bye, I thought that we would play a lot better than we did. We really didn’t execute on defense to our standard and, obviously, the offense was really bad.”

The game got off to an ugly start for Rice. After a UTSA 75 yard touchdown drive on the opening series, Rice was forced to punt, and UTSA marched down to the Rice 13 before settling for a field goal. Rice punted again, before UTSA running back Sincere McCormick, who ended the day with 117 yards, broke off an 81 yard run, leading to a Roadrunner touchdown just two plays later. Just when things couldn’t get worse for the Owls, graduate quarterback Jake Constantine threw an interception that was returned for a touchdown, putting them down 24-0 less than two minutes into the second quarter.

The offense continued to struggle, mustering only 66 yards on the ground and 36 yards in the air. Constantine suffered an injury early in the second quarter that ruled him out for the rest of the game, ending his night with just three completions on six attempts for a total of 21 passing yards and one interception. According to Bloomgren, the loss of Constantine during the game interfered with the game plan that Rice had planned.

Constantine was replaced by redshirt freshman quarterback Luke McCaffrey who also was not successful in the air as he completed five passes in 10 attempts for a total of 15 passing yards and an interception. According to Bloomgren, in order to improve the lackluster offense, the team needs to focus on limiting turnovers and being able to convert third downs.

“We have to protect the ball … turnovers are game-changing plays and we have to make sure to limit those,” Bloomgren said. “We cannot be 3 for 14 on third downs; we have to be better than that. It starts with being more efficient on first and second down to put yourself into a situation where it is third down and reasonable.”

“The confidence needs to be improved,” Bloomgren said. “We need to learn how to move on from bad plays and have to get to the point that when something bad happens, we need to learn to set our jaw and go to the next play. We need to focus on what we can control, which is the next play, and not the plays that have already happened. I think that is something that we need to work on.”

Next Saturday, the Owls will travel to Alabama to face the defending conference champion University of Alabama, Birmingham on Oct. 23 at 2:30 p.m.