Review: ‘Venom: Let There Be Carnage’ rushes and dissatisfies fans 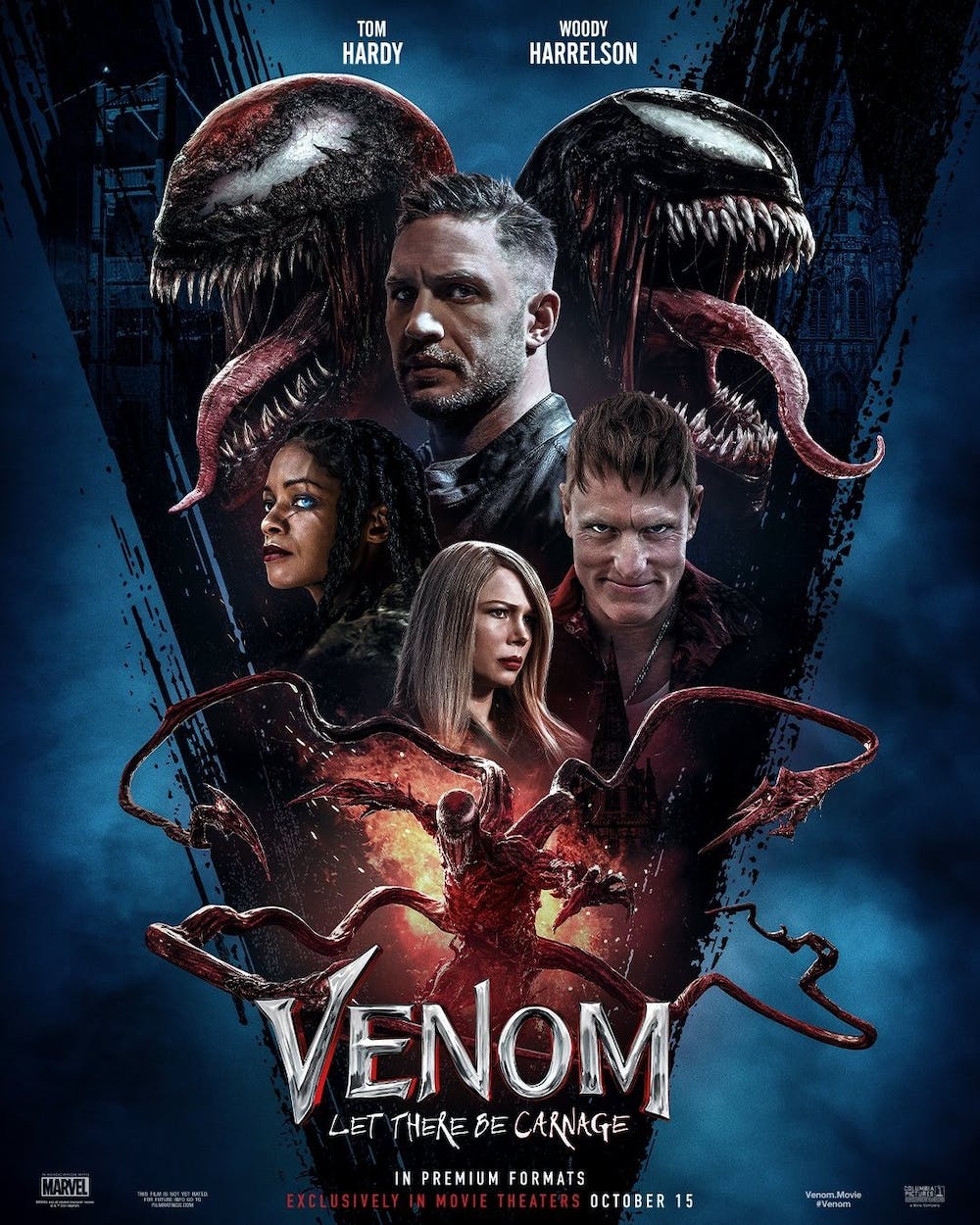 When “Venom” was first released in Oct. 2018, the idea of Spider-Man’s greatest villain — previously seen in “Spiderman 3” — leading his own movie created much skepticism for critics and fans alike. However the film itself exceeded all expectations. The story of investigative journalist Eddie Brock (Tom Hardy) and the parasitic symbiote Venom teaming up to save the world was a hit, and the film grossed $856 million globally. While not an outright critical success — the film holds a 30 percent score on Rotten Tomatoes — the original “Venom” was a crowd pleaser and, in my opinion, a solid popcorn flick.

Unfortunately the same cannot be said of “Venom: Let There Be Carnage.”

Whereas the original “Venom” focused primarily on developing the relationship between the plucky Brock and his symbiote, the sequel fails to make new characters that feel understandable or realistic, while also distorting the key relationship. Above all, the film suffers from a lack of proper pacing in its extremely short 90-minute runtime. It feels like the film is split into two: The first part drags while the second rushes through the plot.

The film opens shortly after the conclusion of the original. Brock and his symbiote Venom’s relationship is on the rocks, because Brock refuses to let the parasite feed on the humans which it needs for energy. While this is happening, Brock is also investigating the serial killer Cletus Kasady (Woody Harrelson) who is on death row. After a visit to the prison, Brock and Venom are able to deduce the location of the bodies of Kasady’s victims leading to Kasady (who refuses to speak to anyone aside from Brock for an unspecified reason) being set for execution. The conflict of the film begins here after Kasady, prior to being executed, attacks Brock and bites him, absorbing a part of Venom who then becomes the titular villain Carnage.

The opening act of the film is shockingly slow with the direction feeling almost meandering at times. Whereas the relationship of Brock and Venom had a certain electricity in the first film, here the dialogue did not land and many of the jokes felt contrived. Though some chemistry appeared on the screen with the return of Brock’s former fiancée Anne Weying (Michelle Williams) and her new fiancé Dan Lewis (Reid Scott), it felt stale and forgettable.

After Carnage is absorbed into Kasady’s body, the film quickly picks up steam. The second and third act are a marked improvement over the first with fantastic set pieces that truly feel ripped from a comic book page. The CGI is surprisingly clean, with seemingly natural action scenes, and some well-timed jokes sprinkled throughout the head pounding was a nice addition. Nonetheless, the second half of the film felt quite short. If the film had spent more time here fortifying the motivations of the villains Carnage and Shriek, the conflict would have then resonated much more.

This all said, there are some positives from the film. Most notably is the mid-credit scene which was so good and impactful that it almost redeemed sitting through the entire movie. Without giving away spoilers, it is, in my opinion, the best post-credit scene in any Marvel movie. In addition to this, the acting is superb across the board. Hardy, in particular, again nails the comic book feeling of Brock’s character and really sells the character’s emotions.

Overall fans of the original Venom will leave somewhat disappointed with this sequel. Although it has some highs, the film feels hurried and needs better character development.