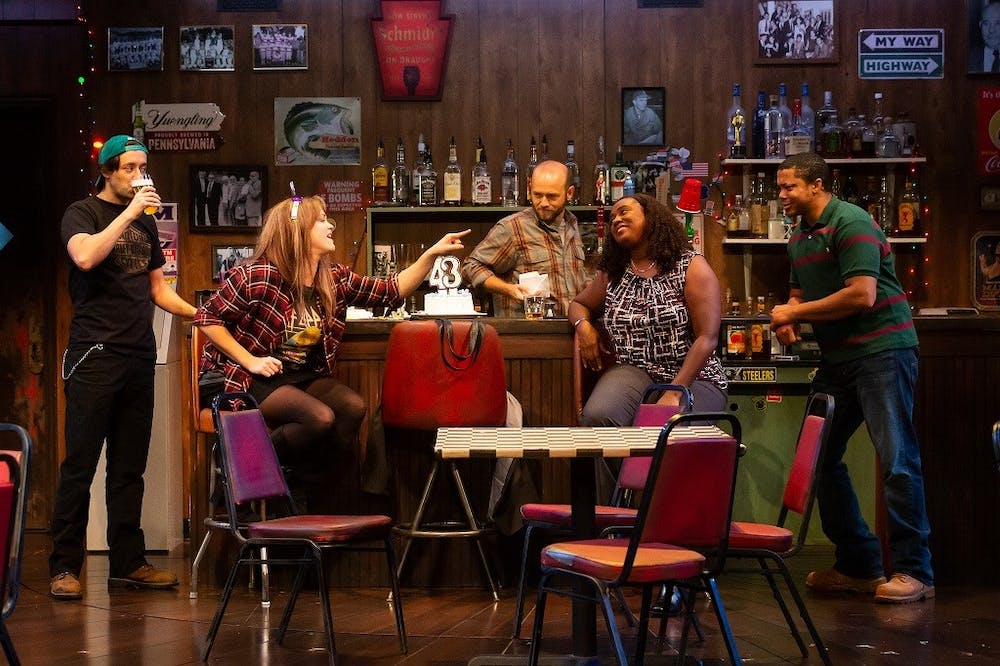 It’s Sept. 29, 2008. In the town of Reading, Pennsylvania, two men occupy a claustrophobic square of harsh white light — one marked by a black eye and white supremacist face tattoo, the other bearing the pen and notepad of a parole officer. The scene is static, the performances tense. This is Lynn Nottage’s prize-winning play “Sweat,” performed at the Alley Theatre in Houston.

A jarring nature documentary narrative voice takes us back eight years. Three middle-aged women enter a transformed, warmly lit stage. Laughing, dancing and begging for one more round from the grizzled, good natured bartender, Tracey, Cynthia and Jessie reluctantly conclude the remains of a birthday party. They have worked at a nearby steel mill called Olsteads since graduating high school. Their raucous gossip and tangible history as childhood friends epitomize the heart of “Sweat,” carrying it through its broader political and economic themes. Against the backdrop of this intimate bar (and looming factory-esque rods in the distance), these women and their sons, Chris and Jason, monologue, reminisce, banter and fight around the spectre of an all-too-familiar American Dream.

After a slow moving introduction, the plot commences when Cynthia, who is Black, gets promoted over her white counterparts. Racial tensions abound as Tracey deviates from the sharp, fun and flirtatious character she is at the play’s beginning, to bitter, tired and obnoxious as her jealousy and prejudice develop over Cynthia’s success. Elizabeth Bunch smooths out Tracey’s abrupt shift by acting her part with a natural vitality and convincing energy, allowing enough of her personality to shine without overwhelming other relevant stories. She and Michelle Elaine, the actress portraying Cynthia, have a lively chemistry comparable only to that of Elaine and Shawn Hamilton, the actor portraying Brucie, Cynthia’s ex-husband.

“Sweat” covers themes of voter disillusionment, racial alienation and the American family in the workplace. Through its parallel narratives, “Sweat” demonstrates the different ways in which each of its characters interacts with the American Dream; some are imprisoned for their pursuits, while others move up the economic chain to realize their dreams of leadership and steady employment.  At the time of its release in 2017, “Sweat” very clearly commented on the political cynicism surrounding the onset of the Trump era. Stan, the bartender’s, defeated proclamation: “I’m not voting, ‘cause whichever lever I pull it’ll only lead to disappointment” is emblematic of this civic distrust.

Though full of redeemingly dynamic moments, “Sweat”’s rhythm leaves a lot to be desired. Through direction, production and writing, Nottage and these actors often try to make their characters three dimensional without quite getting there. From angry to fiercely happy to nostalgic, each scene is formulaic in it’s rant-to-reminisce prescription. The stifling monotony of the bar setting, the repetitive motif of birthdays and the transitory narrative voice all fall short of their theatrical intentions, until they are borderline contrived in their sameness. Characters stand, sit, gesture and monologue like hamsters in a wheel.

It wasn’t until the violent, concluding culmination of underlying racial and personal tensions, that I felt truly engaged by the story. When Cynthia takes center stage in an attempt to appeal to her lifelong friends who still work on the factory floor, the agitation is palpable. Until then, the out of place sense of mystery, overdone ambient music and self satisfied stage transitions stating the weather and Dow Jones as metrics by which to measure the passage of time utterly disrupt the play’s attempt to seriously comment on the dangers of white, working class dissatisfaction. Though “Sweat” offers valuable insights into contemporary racial and economic dynamics, much of its direction, pacing and auditory elements remain fragmented in their attempts to conceive a coherent whole.