R2: The Rice Review creates space for literature and community at Rice 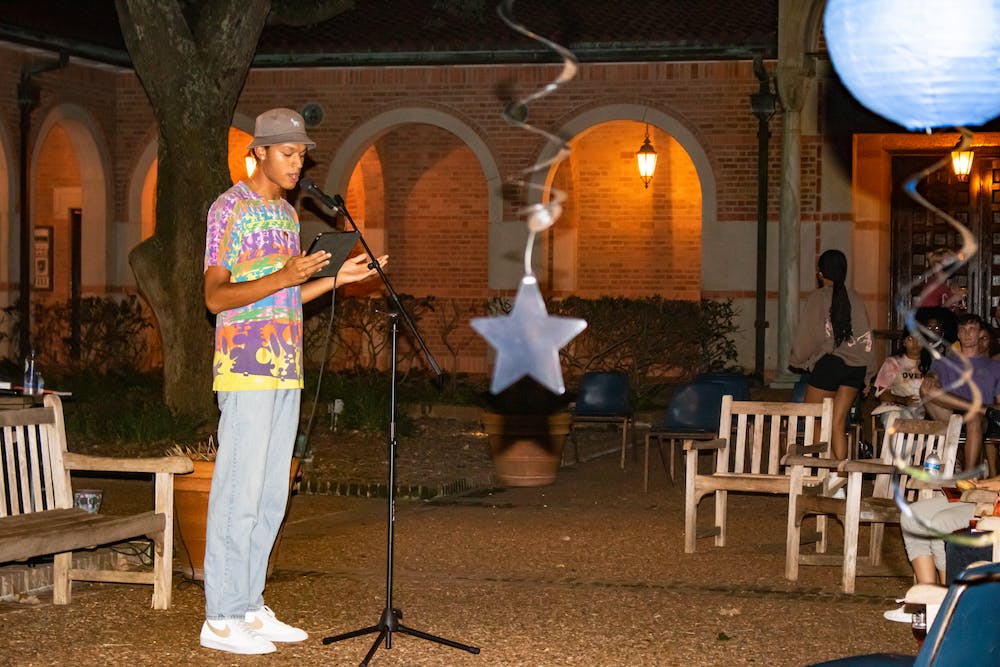 Nearly 300 Rice community members showed up under the glowing string lights of Ray’s Courtyard on Sept. 30 to both perform and listen to Rice students and alumni read poetry and prose, perform original and cover songs and more at R2: The Rice Review’s fall Open Mic Night.

R2’s Open Mic Night serves as one part of the undergraduate organization’s purpose, according to Ian Schimmel, R2’s faculty advisor, who described the organization’s intent as both creating and publishing a literary magazine as well as fostering spaces.

“The dual functions of R2 [are] to make a book in the traditional sense of literary production, but then also to think outside of that mold,” Schimmel, senior lecturer in creative writing at Rice, said. “How can we make spaces and opportunities and projects so that people engage with literature more in their everyday life? What you hear in an event like Open Mic Night is just how critical that space is for everyone on campus, regardless of their major or academic interests.”

Through both R2’s magazine and its public events, the group hopes to simultaneously expand the Rice community’s perception of literature, while giving space to the many voices on campus, according to Schimmel.

“While literature is serious, it can also be funny. It can also be quirky. It can be charming,” Schimmel said. “From the outside looking in, [literature] can seem like it’s a very narrow definition, and it’s our job, as [R2] staff, to broaden what people expect of literature and [their] understanding of what literature can do for a community.”

Hannah Young, one of R2’s editors-in-chief, said that she would like to see more submissions to the magazine in the future. R2’s submission period spans from November to December. Students of all majors are encouraged to submit poetry, fiction, creative nonfiction, literary translations and visual art.

“Something that I’d like to see is just continuing to get more and more undergraduates aware of [R2] and submitting to it,” Young, a Wiess College junior, said.

This focus on community also extends to the larger Houston and global community. Colton Alstatt, an R2 editor-in-chief, said that during their freshman year R2 sold copies of their magazine at a Houston Zinefest. According to Alsatt, R2 is deciding what sort of community outreach the organization will be taking on this school year.

“I would love to see us go back [and] have Rice be a literary or artistic presence in Houston again,” Alstatt, a Lovett College senior, said. “So we’re deciding in committees whether they want to do something out in Houston, or like a charitable cause or around rights. Yeah, something with that idea of supporting community – fostering  art, either at Rice or beyond.”

Similarly, one of R2’s goals this year is to expand their reach according to Marcus Munshi, one of R2’s editors-in-chief. Munshi, a Duncan College junior, said that R2’s staff as a whole hopes to continue expanding their digital reach at Rice, while third- and fourth-year members of the magazine are also working on a new magazine (Texlandia) featuring writers across the world. Members of R2 enroll in a course that is 1.5 credit hours each semester.

“We always start off the year with Open Mic [Night] as team bonding,” Munshi said. “Then we’re sort of separating into the years. First years are learning more about what it means to study, evaluate and to be a part of the magazine from Ian. Second years are getting ready to lead the sections, and they’re also working on a digital [literary] initiative. Third years, we’ve been working on ‘Texlandia Magazine’ and offer[ing] guidance to the second years as to how they can take the lead at R2 now.”

With the spring semester comes a focus on producing the literary magazine. In the spring, R2 staff look through all the submissions for the magazine at “The Big Read,” a meeting from 6:30-11:00 PM involving lots of food, caffeine, discussion and jokes, according to Munshi.

“My sort of brand became making bad food jokes about pieces,” Munshi said. “Like, ‘This is a deep fried ice cream at the Texas Fair that you regret eating’ … so we have a lot of fun like that.”

In the weeks after this meeting, Munshi said that the individual sections will meet to discuss the pieces and suggest edits.

For Young, this process builds community among the R2 staff and is something that stands out the most to her.

“R2, yeah, it’s the literary undergraduate magazine, but it’s [also] a community of like-minded people, who are passionate about something similar,” Young said. “I enjoy spending time with them to make this thing together.”