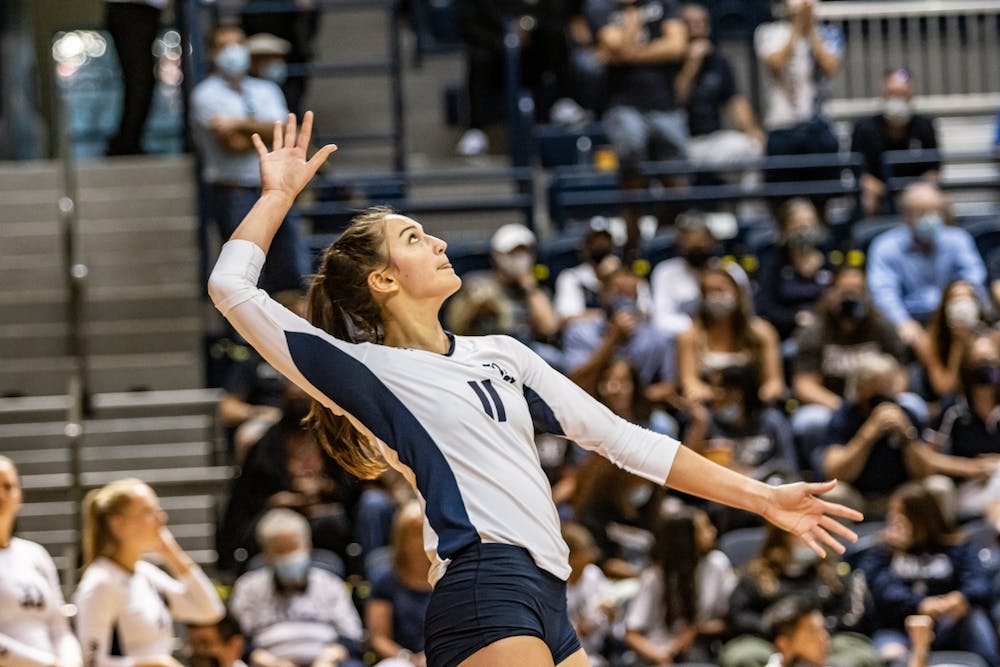 When she first arrived at Rice four years ago, senior outside hitter Nicole Lennon knew she wanted to find a way to immortalize her career. Now, as she heads into the stretch of her fifth and final season at Rice, Lennon has found a way to do just that. After more than four seasons playing a key role in bringing the Owls to the national stage, the two-time Conference USA player of the year is closing in on Rice’s all-time kills record.

“[When I got here], I knew I just wanted to make a positive difference for Rice volleyball, and that there would be a way to immortalize that,” Lennon said. “Now, I see breaking the all-time kills record as a way to leave my mark on this program—a way to immortalize what has been the most exciting 4.5 years of my life.”

As it stands, Lennon has 1,945 kills, 24 shy of Rebeca Pazo’s record. With the record on pace to be broken during the Owls’ upcoming series against Louisiana Tech University, Lennon reflected on her volleyball career and how it all started with her love for the game.

“I started volleyball casually in second grade, just playing in a small league at the YMCA,” Lennon said. “My love for volleyball really sparked though when I started playing competitively [for a] club [team] in seventh grade. My love for competing is what has kept me playing the game all these years.”

When the time came to pick a college to continue her volleyball and academic endeavors, Rice seemed to have it all for Lennon.

“I picked Rice for so many reasons,” Lennon said. “The big ones are the academics, the location and the potential of the volleyball program. The coaches have also been awesome from the first time I ever talked to them.”

Lennon’s decorated career, which includes two Second Team All-American honors according to VolleyballMag.com, has come as a part of the first Rice team to win the C-USA tournament and teams that have made the NCAA tournament for three consecutive years. During Lennon’s career, the Owls have faced and knocked down some of the nation’s perennial volleyball powerhouses. Twice in Lennon’s career, she helped Rice beat a top-three ranked University of Texas, Austin team, providing statement victories that have helped establish the Owls as a legitimate NCAA tournament team, according to Lennon.

“Beating Texas twice was an [unbeatable] experience.” Lennon said. “Both times were the hardest I’ve seen my team fight, and those wins brought us closer as a team. And I love being able to put Rice volleyball on the map.”

But for Lennon, while the victories and accolades have accumulated throughout her career, the relationships that she has made on the team throughout the years is what she said that she treasures the most.

“Cliché as it is, my favorite thing about being a part of the Rice volleyball team has been the relationships I’ve formed with my teammates,” Lennon said. “I have gotten so close with them over the years and have formed lifelong friendships. As a bonus, it’s been fun competing with the big dogs alongside my best friends.”

Relationships seem to come easy for Lennon, who describes herself as a major extrovert, which is why it comes as no surprise to see her flourishing in Rice’s community.

“My favorite thing about being a student-athlete at Rice is the community,” Lennon said. “Having instant friendships with the other student-athletes is great and has made my experience at Rice so fun. It’s also great to have such fervent support of women’s sports from our student body; I love it when I go to class and one of my classmates congratulates me or says they enjoyed watching the game. I am also grateful for caring professors.”

Not only does Lennon, a double major in psychology and economics, love to take part in Rice’s community, but being a student-athlete at Rice has also allowed the outside hitter to further her academic passions as well.

“Psychology is as big of a passion to me as volleyball is,” Lennon said. “I am heavily involved in research on and off campus. After undergrad, I plan on getting my Ph.D. in clinical or counseling psychology, and then becoming a clinical psychologist one day.”

But before the four time C-USA commissioner’s honor roll recipient departs to get her Ph.D., Lennon said that she wants to cap her storied career with more wins, titles and accomplishments.

“This year we want to win the conference,” Lennon said. “Then, we want to go further in the NCAA tournament than we have before. We have a chip on our shoulder.”

As she closes in on the kills record, Lennon is well on her way to immortalizing her Rice volleyball legacy. Looking back on her career, she said that she has accomplished things that she could not have imagined accomplishing coming into Rice.

“I genuinely could not have asked for a better career,” Lennon said. “I have accomplished things I never thought I would, the [kills] record included.”