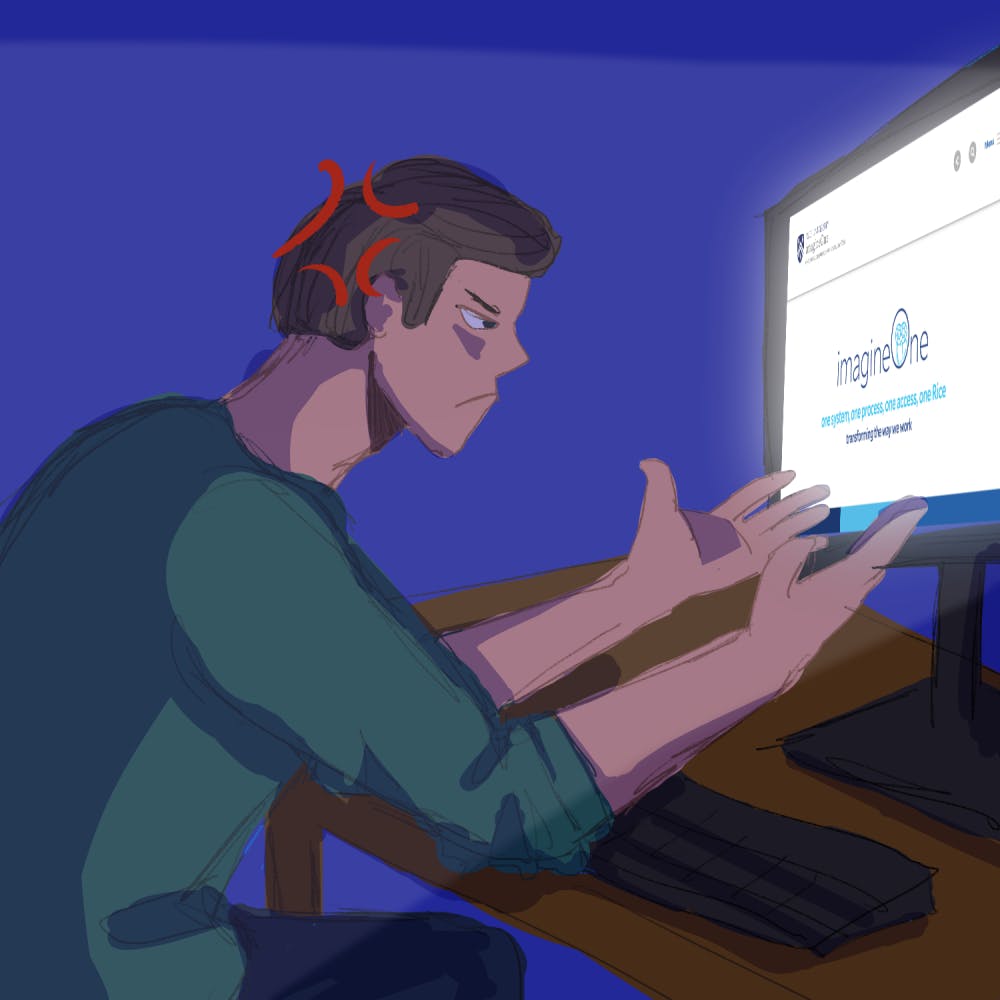 Student-run businesses, club sports and organizations across campus are among those who have expressed dissatisfaction with ImagineOne, the new payment system used by Rice. Earlier this year, Rice implemented iO to replace its old pay system, Banner, according to Paul Padley, interim vice president for IT.

Emily Wolf, personnel manager of Rice Coffeehouse, said that Coffeehouse was one of the first places on campus to switch over to iO and that they did not receive much guidance.

“We were open during the summer when the transition happened,” Wolf, a Martel College junior, said. “[There were] a couple of Zoom info sessions. But beyond that, there wasn’t a lot of information on how the system worked or how to troubleshoot issues.”

Wolf said that a lot of Coffeehouse managers are still missing access to important parts of the iO system.

“We’re kind of just sending a lot of emails without receiving a lot of responses,” Wolf said. “We have been going since July, whereas the other [SRBs] started back up in September or August. It’s been like three months now, and we just still are missing access.”

Padley said that several reasons prompted the change to iO, and the transition is meant to improve the administrative processes on campus.

“Banner was based on very old technology that predates Wi-Fi and Google search by about five years,” Padley said. “Also, starting in 2007 Rice had to acquire additional applications to support digitization of its business processes in HR, procurement, expense management and other areas. Over time, this extended IT ecosystem became cumbersome, reducing faculty and staff productivity.”

William Miles, general manager of Rice Bikes, said that he is also frustrated with the number of issues Rice Bikes has encountered due to the transition to iO.

“We used to be able to see the fund balances and everything going in and out of our accounts through Banner,” Miles said. “[Now] I can’t see the money that’s coming in and out of all funds. I can’t verify anything. I don’t actually know what payroll has been for the past three months apart from my calculated guesses.”

Miles said that when he finally gained access to the financial dashboard, the information on it was too out of date and partial to be useful.

“From what I can see, only a third of our employees are in the system, so figures for payroll are incomplete,” Miles said. “Furthermore, revenue that I had reported weeks ago still hasn’t been posted and it arrives in a very inconsistent manner.”

Ryan Emelle, general manager of The Hoot, said that she was also never given a reason for the transition and believes that iO isn’t a good system for SRBs. The iO system requires employees to utilize a clock-in, clock-out system for each shift compared to self-reporting hours in the past.

“[iO] works against [SRBs] in a way because of the way the clock-in clock-out thing goes,” Emelle said. “If you don’t really remember, you kind of have to just go off of your memory. I feel like a lot of people are not probably getting as much pay as they typically would because of the clock-in, clock-out and I wished they would have consulted with us ... because I just think it’s working against all of the students now.”

Beck Burgelin, a teaching assistant for GLHT 201, said that the clock-in, clock-out process is frustrating.

“Every single time if I don’t clock in or clock out, after the fact, I have to submit a time change,” Burgelin, a Wiess College senior, said. “It requires someone else to approve, which is a hassle. It’s a lot of work for the students.”

Harrison Huang, a COMP 140 teaching assistant, said that requests for time change on iO typically get resolved in a few weeks, sometimes after the time sheet has already expired.

“When this happens, my previous clock-in time gets [a] separate entry and iO cannot match my clock-out time with my clock-in time, requiring me to submit another request to fix this issue,” Huang, a Jones College sophomore, said.

According to Miles, two of his employees still cannot access the iO time clock.

“Our personnel manager has been personally entering and uploading their time sheets each pay period,” Miles said. “The shop has been open for five weeks now.”

Padley said that learning a new system is always a challenge, and that the iO, being a cloud-based system, will be continuously improved upon as new updates are available.

“The [iO] team is working with hundreds of individuals and groups across the campus that helps us understand and fix problems people are having,” Padley said. “We also have a help desk that receives service request tickets, and we carefully analyze the sources of problems reported.”

Miles said some students have not been getting paid since the switch to iO.

“I have one guy who’s several weeks behind getting paid,” Miles said. “[My employees also] didn’t get paid their tips until the very end of September … They think that it’s me not doing it, but it’s out of my control. I don’t even know who was responsible … It’s stuff like that where people actually are not getting paid on time, which is just not right.”

Miles said he believes the iO website and interface are terrible on their own.

“The thing crashes, it lags,” Miles said. “If you forget to clock out or clock in, you can’t go in and make a change. But then that falls on our personnel manager who then has endless requests to make all these changes. Again it’s on the students. And again, no student was ever asked about what they wanted in the system.”

Miles said he feels that the administration does not seem at all concerned by delayed payments for students.

“I think there’s ... no communication from the [administration],” Miles said. “There’s been no support. There’s no sense of urgency about changing anything.”

Wolf said that Coffeehouse tried to push back against the transition to iO when they first found out about it.

“In terms of the clocking-in and clocking-out system, it’s a little difficult for our employees since I think with people working a nine to five, it’s fine to clock in at the beginning of the day and clock out at the end, but we work really variable shifts,” Wolf said. “And so we had a little bit of a pushback when we heard about that change, and we weren’t really given any explanation as to why that switch over was happening.”

Padley said that there are points of contact in the administration for students when encountering issues with iO.

“If it is an issue of pay, the student should contact their supervisor,” Padley said. “If the issue is related to student clubs or other student organization expenses, students can contact the iO HR/Finance Service Requests.”

Wolf said that she is unclear about the process of reaching out to administration because of the lack of response and solutions.

“I think a lot of us are just sitting here, not really knowing how to resolve the issues and not getting much response when we try reaching out,” Wolf said.

Miles said that the administration made the change in July without consulting students and staff who were directly affected by it.

“What I found out is that [iO] was all pushed by payroll and HR, so people who have nothing to do with the students,” Miles said. “There was no consultation with any students. I know my advisors at the student center were never asked what they thought about it. They made all these assumptions about what they thought the students needed without asking anybody.”

Padley said that there is a graduate student member on the University Committee on IT who may have been present when iO was discussed in that committee. Besides that, there was no consultation with students.

Padley said that Rice started looking into iO in 2018 and was encouraged by other universities’ transition to modern cloud-based systems that increased their efficiency.

“The new system allows Rice to eliminate a number of paper-based processes and provides more detailed information than was previously available,” Padley said. “As a result, many of those administrative processes have been simplified and they’re now implemented in one software product rather than the multitude of software products and computing systems that we previously used.”

According to Padley, the administration does not intend to switch back to the old system.

“Our goal is to make iO a success at Rice, not to go backward,” Padley said. “Many universities have made a similar transition to a modern business process system such as iO.  It’s always difficult, but it’s also ultimately been an improvement over the previous system. The [iO] team is working hard to improve iO and the business processes it enables.”

Miles, who is also the president of men’s club rugby, said that iO likewise affects club sports negatively. According to Miles, there was significant delay to purchase equipment and register people to prepare for matches.

According to Miles, SRB Directors Korista Lewis and Cristy Torres are the primary point of contact to reach the administration. However, Miles said they have also encountered difficulties when seeking solutions from the administration.

“[Lewis] and [Torres] have been pushing what they know for us and they’re just not getting replies and are kind of stuck in the middle and trying to try to help us,” Miles said.

Lewis said that she thinks it’s too early to decide whether switching to iO was a good move for Rice or not.

“The main challenges that the SRBs have faced with [iO] has been learning how to get the correct access for each of the unique manager positions,” Lewis said. “I would say, as with anything new, we have all faced challenges … SRBs have been diligent in learning the ins and outs — it’s a steep learning curve for sure and I am proud of their patience and perseverance.”