Make no mistake, joining the AAC is a great move 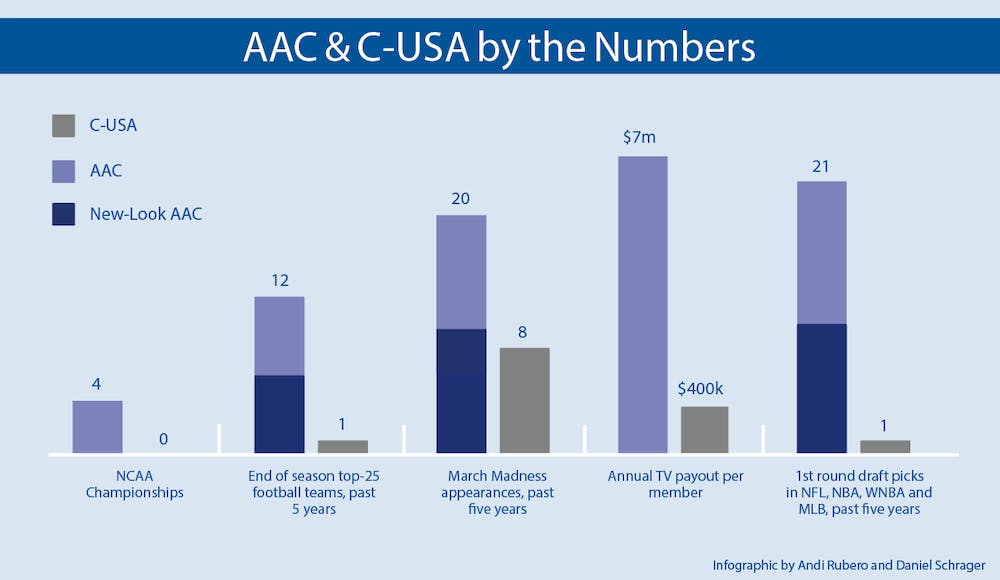 The American Athletic Conference, as baseball hall of famer Yogi Berra famously said about the future, ain’t what it used to be. With the University of Houston, University of Cincinnati and University of Central Florida all leaving for the Big 12, the AAC will lose arguably its three most valuable members before Rice plays a game in their new conference. Those three were all key to the AAC’s push to become the sixth major conference: UCF made a legitimate College Football Playoff push with back to back undefeated regular seasons in 2017 and 2018, Houston made the men’s Final Four last year and Cincinnati is currently ranked No. 2 in the country in football. To make matters worse, the University of Connecticut, easily the best women’s basketball program in the country, left the AAC in 2020. The conference that Rice will join in a few years will be a far cry from the AAC of recent years.

Ever since the move was announced, a number of talking heads have been quick to point out that the new AAC will feature 12 former Conference USA members out of 14 or 15 total teams, depending on the sport. Essentially, Rice is moving back to C-USA circa 2010, when Southern Methodist University, Tulane University, Memphis University and Tulsa University were all members.

But that isn’t necessarily a bad thing. C-USA was a much better conference ten years ago than it is today. The problem is that all of the good schools moved to new conferences, leaving Rice behind in a much worse C-USA.

It would be easy to predict the same fate for this version of the AAC ­— their top members get poached by other conferences, the schools that they invite as replacements don’t pan out and next thing you know, it’s one of the worst conferences in the FBS. But what’s left of the AAC is still a very solid conference. SMU is currently ranked No. 19 in football, and Memphis is an up-and-coming men’s basketball program entering this season ranked No. 12 and their football team ended the 2019 season ranked No. 17. Additionally, Temple University is historically a strong men’s basketball school, and was ranked in the top 20 in football as recently as 2016.

On top of all that, the AAC’s moves have consistently worked out in the past; they bet on high-potential schools in big markets that they believe could turn into top programs with more funding and visibility. UCF was a risky move, as an up-and-coming C-USA football program when they joined the AAC in 2013, but now they are one of the very best Group of Five teams in the country. Memphis and Temple followed this formula as well, and both moves worked out for the AAC. The conference stuck to the same blueprint this time around: the University of Alabama, Birmingham, University of Texas, San Antonio, and Florida Atlantic University all have very similar profiles right now to UCF when they first joined the AAC. If the AAC’s plan works out, the conference could remain strong even after the losses of UCF, Houston and Cincinnati.

But even if the moves don’t pan out and the AAC falters, this will still be a great move for Rice. If this makeshift AAC only lasts for a few years before it is sent into another round of realignment, that will buy Rice a few more years to strengthen their case to be a member of a top conference — though not necessarily a Power Five conference, that looks out of reach for the foreseeable future. Given that much of conference realignment is driven by football and its lucrative TV deals, Rice, which has won just 14 football games in the past six years, now has time to bring its football program up to par with other AAC teams so that it can withstand a future realignment.

Perhaps even more importantly, if Rice hadn’t secured the move to the AAC, they’d be stuck in a falling apart C-USA with just eight remaining members, soon to be seven if the University of Southern Mississippi leaves as expected. They would have had to hope that C-USA miraculously recovered, or scrambled to find a new and possibly worse conference. Either of those would have been nightmare scenarios.

In a round of realignment driven almost entirely by football, Rice had a very real chance of missing out. But they didn’t. Best case scenario, they joined a better conference that can be their long term home. But even if the move is temporary, even if the new AAC is just a small step up from C-USA, it’s still a step up. Conference realignment tends to create winners and losers with very little in-between; the fact that the Owls can be considered winners is itself cause for celebration.