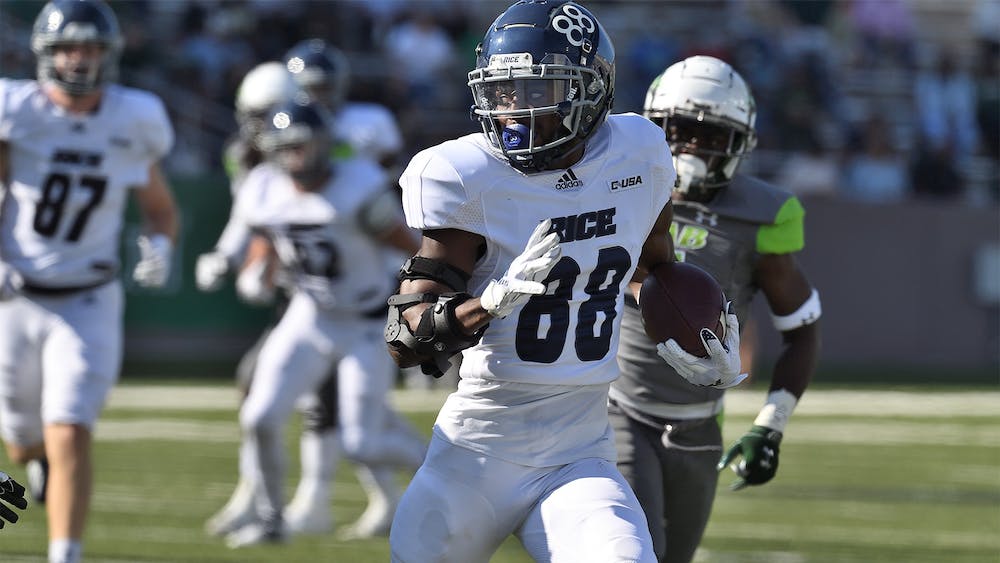 Rice football picked up a road win this past Saturday afternoon as they upset the University of Alabama, Birmingham 30-24. Predicted to lose heavily, the Owls entered their matchup against the defending conference champion Blazers as 23.5-point underdogs. The win on Saturday puts the Owls with a record of 3-4 on the season, including a 2-1 record in C-USA play. Head coach Mike Bloomgren said that he was proud of the team’s win over a Blazers team that has run C-USA in recent years.

“That was a very, very big win for our program,” Bloomgren said. “Two out of the last three years, UAB has won the conference and they are a very, very good football team. It took everybody on our football team to come up here and find a way to win this game. It took every second on the clock and it took great effort across the board. [I am] super, super proud of our guys.”

Redshirt sophomore quarterback Wiley Green was handed the reins to the offense, getting the start for the first time since the Owls’ season opener. Green led the offensive attack to a fast start, with two touchdown drives in the game’s first nine minutes to take a 13-0 lead. Green finished the afternoon with 205 passing yards, three passing touchdowns and no interceptions. According to Bloomgren, Green played well in his return to the starting lineup.

“I thought that he put on a clinic on how to play quarterback,” Bloomgren said. “He played his butt off and I am so proud of him. Today is one of those upsides for our team and Wiley.”

After the Blazers came back from their early deficit to take the lead, the offense responded with two touchdowns in their next four drives, to bring the lead back to 13 in the third quarter. According to Green, the Owls’ success on the offensive side of the ball was due to an overall team effort rather than due to only one player.

“It is pretty awesome to get this win,” Green said. “But we have to give props to the offensive line that played today. Our receivers also made pretty great plays on the outside, making it pretty easy for me to get the ball downfield to these guys. Our coaches made such a great game plan to attack it and I can’t tell you how confident I felt coming into this game.”

The Blazers wouldn’t go away quietly, scoring a 72-yard touchdown midway through the third quarter to keep the game within a score. But on the Owls’ first possession of the fourth quarter, they marched 71 yards on 13 plays to kick a field goal, taking up over eight minutes of clock in the process and giving Rice a 30-21 lead. Just one week after being shut out against the University of Texas, San Antonio, the Owls were able to score 30 points against a UAB defense that entered the week allowing the fewest points per game in conference play.

According to the redshirt sophomore August Pitre III, the offense was able to fix the execution problems that plagued them against the Roadrunners.

“I feel like last week, one guy was not doing his one-eleventh and made the entire play look bad,” Pitre said. “I think that this week, though, we came in with our hair on fire. We had receivers making their blocks, [the] offensive line [was] holding up in protection, running-backs running hard. We came out fast, focused on our assignment, and just executed.”

Despite the offensive success, the Owls defense struggled against the Blazers, allowing a total of 445 total offensive yards, including 318 passing yards and two rushing touchdowns. According to senior safety Naeem Smith, they made just enough plays to secure the upset.

“I love the resilience of our team,” Smith said. “It was not a perfect game at all today, but at the end of the day, it was a big-time win for our program. This was something that we need to snowball going forward.”

Despite the tough day defending the Blazers’ offense, the Owls were able to get a stop in the biggest moment of the game. With two minutes and 10 seconds left on the clock, the UAB offense received the ball trailing by just six. The Owls defense held strong at first, forcing UAB to use nearly the entire clock to get the ball to the Rice 40. Then, with just 11 seconds left, the Blazers’ quarterback Dylan Hopkins completed a 40-yard touchdown pass that could have won the game for the Blazers. However, the play was called back for a holding penalty, and Rice held on to win.

The win moves the Owls to a tie for fourth place in the conference and just three wins away from their first bowl game since 2014. But despite the statement win over a conference rival, Bloomgren believes that the team still has significant room for growth as he hopes that this program can continue to develop.

“We are still growing as a football team and we are nowhere near a complete project,” Bloomgren said. “I appreciate the thought of putting Gatorade on my back for winning this game, but this is not any kind of accomplishment and this does not reach our goals. This is just the next step. What we have is a chance to go 1-0 next week and even out our record and continue to pursue our goal.”

Next Saturday, as part of Rice’s Homecoming & Families Weekend festivities, the Owls will host the University of North Texas, who are 1-6 on the season, on Oct. 30 at 1:00 pm.