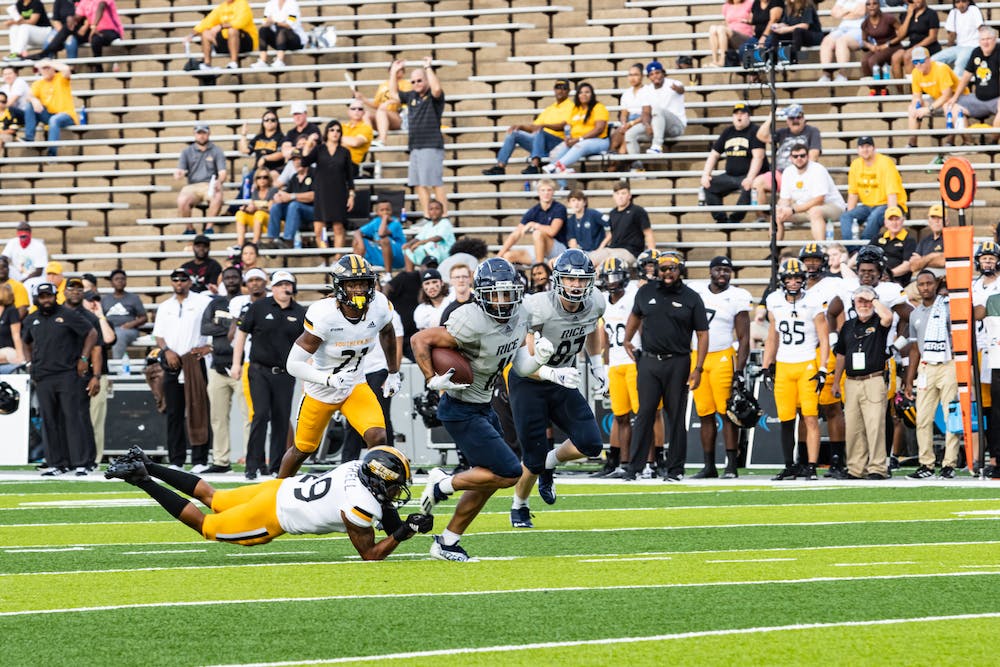 Rice football opened conference play with a 24-19 victory against the University of Southern Mississippi University on Saturday. Playing at home in front of over 16,000 fans, the Owls won their first conference opener since 2017 to bring their record to 2-3. The Owls opened the game with a scoring drive and kept that momentum for the rest of the four quarters, leading throughout the game.

The big headline of Saturday night’s game was the game-altering performance of the Rice defense. On a night for the record books, the Owls recorded four interceptions, as well as five sacks and nine tackles for loss, their most since 2017. In the waning moments of the game, the Owls defense made some big plays to prevent Southern Miss from taking the lead. With two total interceptions in the fourth quarter, including a game-sealing one by sophomore safety Kirk Lockhart, the Owls defense stepped up big with the game on the line to secure the win, according to head coach Mike Bloomgren.

“The five sacks and four interceptions were things that really changed the game,” Bloomgren said. “I think the defense did a great job putting them behind the sticks and punishing [Southern Miss] when they had the ball. We are all very proud of our defense for finishing the fourth quarter the way that they did.”

In addition to their four takeaways in the passing game, the Owls defense stymied the Golden Eagles’ rushing attack. Allowing only 57 rushing yards on 27 rushing attempts, Rice held the Southern Miss running backs to only 2.1 yards per rushing attempt.

“I just kept trying to tell the defense [that] we had to stay locked in and get the job done,” Garcia said. “No matter where the ball is at or the situation we are in, we are a team defense and we play together. It was a tough week of practice and I think that translated to the game. It was a grimy game and we got it done ... I am really proud of this defense.”

On offense, the Owls managed to put up 24 points behind 192 passing yards and two touchdowns from graduate quarterback Jake Constantine, who was starting his second game of the season.

Constantine, who completed 16 passes on 22 passes, has led the Owls to two wins since replacing quarterbacks Luke McCaffery and Wiley Green, who both left the Owls’ third game of the season injured.

According to redshirt sophomore tight end Robert French, who caught Constantine’s second touchdown during the game on Saturday, the former Weber State University quarterback has done a great job since he took charge of the offense.

“I’m just really proud of him [and how] he stepped up into the starting role,” French said. “We’ve been down two quarterbacks early in the first three games. He just stepped up and made plays when he needed him too and he has continued to play really consistent ball.”

After an 0-3 start to the season, the Owls have recovered to bring their record to 2-3. Next week, the Owls have a bye week to rest and prepare for their next matchup against the undefeated University of Texas, San Antonio on Oct. 16 at 5:00 p.m. If the Owls are able to win against UTSA, they will start conference play with a record of 2-0 for the first time since 2013.

French said that the team is taking the week off in stride, as he believes that the bye week will be beneficial for player recovery and preparation for a tough opponent in the Roadrunners.

“I think it will be nice to have some guys get some rest, bring back some injured guys, and you also have two weeks to really develop our game plan for this next game,” French said. “UTSA is a tough opponent and we’ll have some time to put a really good game plan together and go out there and give them our best.”