Volleyball swept by No. 1 Texas 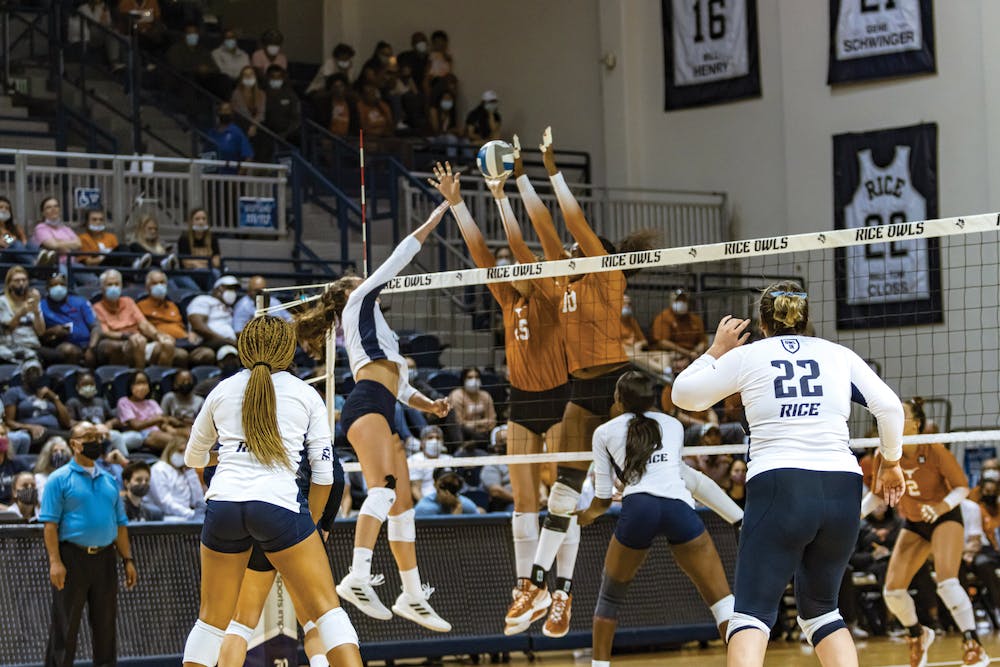 After the 58-0 blowout on the football field last week, there was hope that Wednesday’s volleyball game between Rice and the University of Texas, Austin would turn out differently. Following the two upsets in 2019 and 2020, when the Owls beat the No. 3 and No. 2 UT teams respectively, the team looked to pull off a three-peat of upsets when they hosted the No. 1 ranked Longhorns. However, the Owls could not handle the power of the undefeated Longhorns as they fell in three straight sets (25-14, 25-14, 25-14).

The Longhorns were hot from the start, quickly taking the advantage in the first set and never giving up their lead. Their offense outhit the Owls .388-.042 and recorded a total of 40 team kills while on the defensive side, out blocked Rice 7.0 to 3.0. Errors also played a big factor in the outcome, with the Owls tallying a total of 21 errors compared to the seven recorded by Texas. According to head coach Genny Volpe, the Longhorn’s success started from the serve.

“Texas dominated from the service line and unfortunately we did not respond well to that,” Volpe said. “We were trying to make adjustments and tried different personnel, [but] unfortunately Texas had an answer for everything.”

During the game, the Owls still showed flashes of success. Senior outside hitter Nicole Lennon continued her strong season, leading the Owls with 12 kills and one block while junior setter Carly Graham recorded 24 assists on the Owls 25 total kills. After the game, Volpe said she was impressed with how Lennon played even in the face of a high caliber opponent.

“I thought that Nicole Lennon had a solid match and took some really good swings against one of the best blocking teams in the country,” Volpe said.

Their match against the top-ranked Longhorns marked the fourth time all year that the Owls had faced a top-15 ranked opponent.  According to Volpe, the team was not rattled by the Longhorns’ ranking and was ready for the challenge.

“I honestly don’t think our team felt an intense amount of pressure,” Volpe said. “We were playing the number one ranked team in the country and really saw that more as an opportunity than anything else.”

With the importance of the game in the air, Tudor Fieldhouse was sold out and complemented with a packed student section.  With an attendance of 2,478 fans, the most fans since the 2019 season, Volpe said that the team was appreciative of the support from the community.

“The student section was incredible,” Volpe said. “I’m really proud of our Rice family and hoping they come back out again because we love the support.”

“Overall we played the toughest non-conference schedule in Rice volleyball history,” Volpe said. “I do think that our weaknesses were exposed and we are definitely working through those to be ready for the conference championship.”

The Owls hit the court next for a weekend double header against the University of Texas, El Paso at Tudor Fieldhouse. The games will be Saturday at 1:00 pm and Sunday at 12:00 p.m.