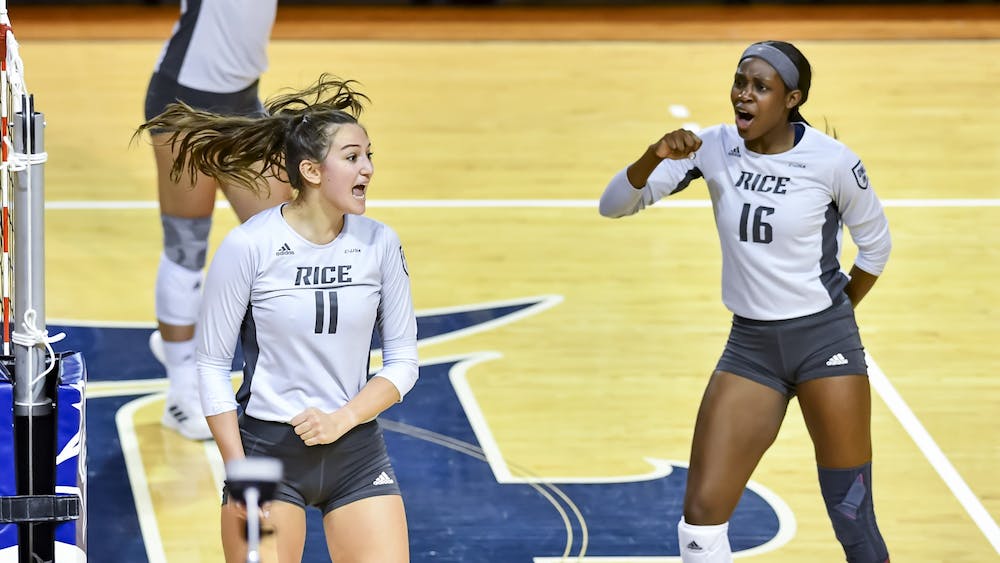 Over the weekend, Rice volleyball closed out their homestand in strong fashion, with sweeps of  Louisiana State University and Sam Houston State University in the Adidas Invitational II. On Friday evening, the Owls conducted a 3-0 performance over the LSU Tigers inside Tudor Fieldhouse. The Owls followed this up with another home win over the SHSU Bearkats on Sunday afternoon for their second sweep on the weekend and their fourth consecutive win. These back-to-back sweeps bring the Owls’ season record to 4-3.

In the first match of the invitational, the Owls defeated the Tigers in straight sets behind a historic night from senior outside hitter Nicole Lennon. Catching fire early in the first set, Rice took a 6-2 lead and never looked back, closing the first frame out by a margin of 25-18. The second set proved more competitive, but the Owls maintained their composure to fight off a late LSU push and preserve a 25-23 victory. The Owls wrapped up the night with a 25-19 win in the third set, featuring Lennon’s match-high 18th kill that elevated her to No. 2 overall in Rice history for total number of career kills. While Lennon said that chasing school records is definitely a conscious effort in her mind, her ultimate motivation is facilitating the team’s success.

“It would be a dream come true to smash the all-time kills record, or to reach 2,000 kills,” Lennon said. “However, the best thing about these goals is that [reaching] them is beneficial to my team. If I can perform well offensively so that we can win games and have another historic season, then it’s a win-win situation.”

In addition to Lennon’s historical kill and strong attacking presence, junior right side Ellie Bichelmeyer and freshman outside hitter Sahara Maruska each added eight kills apiece, while junior setter Carly Graham converted her fourth double-double of the season with 35 assists and 13 digs.

The offense carried over its momentum into Sunday’s battle against SHSU. The Owls took the first set 25-21, but found themselves in a 13-7 deficit in the middle of the second frame. In a tight fight, the Owls climbed their way back to a 28-26 victory, before completing the sweep with a 25-17 victory in the third set. Head coach Genny Volpe said she was proud of their team’s grit and resilience to come out on top amidst some competitive and tight scenarios.

“I was pleased with our focus, and confidence when we were pushed by both teams,” Volpe said. “We have had some tough battles this season, and to see us maintain our composure under pressure and find a way to sweep those teams was a really good sign.”

Volpe also said that she was happy with the team’s execution on the offensive side, as the Owls hit a season best 0.384 as a team against the Bearkats. Graham contributed 46 assists and Maruska tallied a career high of 15 kills on 25 attacks (0.520). Once again, Lennon led the way with her offensive force, topping even her previous game’s performance by recording 26 kills and adding 11 digs for her fourth double-double of the season. Lennon said that she credits her ability to consistently produce top performances to her teammates and the connections they make on the court.

“Honestly, my performance is heavily dependent on my teammates,” she said. “Of course, I’ve learned to be more consistent over the years, but it takes a true team effort in order for me to have games like I did this weekend. I’d like to give special credit to my setter Carly, because we have been working a lot on our chemistry lately, and she gave me the most amazing sets this weekend.”

After completing their five-game homestand, the Owls will next travel to Waco, Texas for the Baylor Classic later this week. They will look to extend their four game winning streak against No. 12 Baylor University on Thursday and McNeese State University on Friday; both at 5:00 p.m.