Volleyball looks to stun No. 1 UT for third straight year 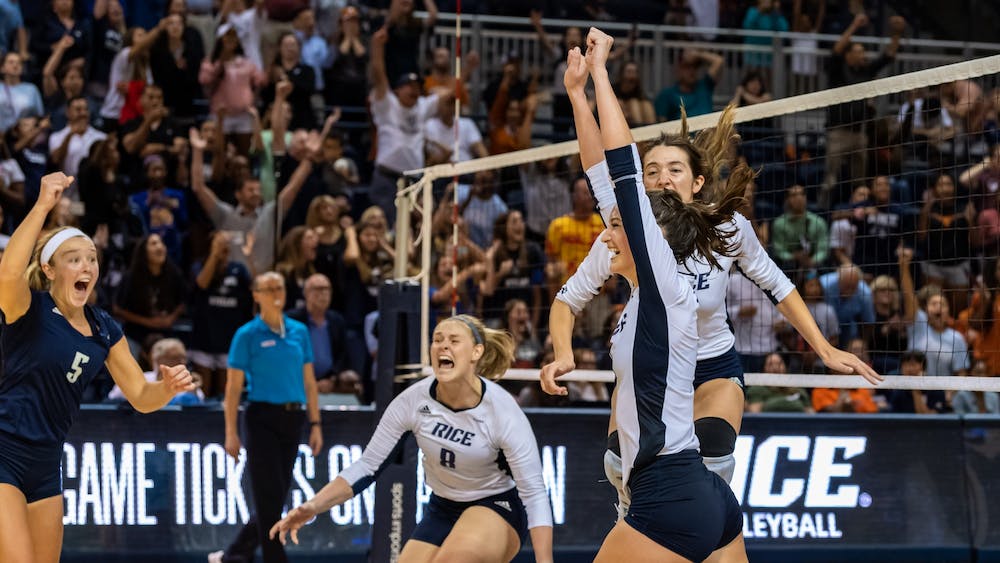 For the third time in the past three years, the Rice volleyball team will match up against the University of Texas, Austin tonight at Tudor Fieldhouse. The Owls look to win their third straight match against the undefeated and No. 1 Longhorns.

This in-state rivalry dates back to 1982 and was heavily lopsided with the University of Texas claiming the first 36 matches until 2019, when the Owls upset the No. 3 Longhorns at home, winning their first ever game against a Top-10 program. The next year, the Owls went into Austin and returned home with another upset, this time stunning the No. 2 Longhorns on their own court in a five set thriller.

This year, the Owls entered the season ranked No. 23, the first time they started the season in the Top-25 in program history.  However, four losses in their first 9 games, including three against top-15 ranked opponents, have dropped them out of the rankings.

With their conference season quickly approaching, the Owls sit at 5-4. Regardless of the rankings or their record, head coach Genny Volpe said she is excited to face a team of such high caliber and the impending test.

“I think the mindset going into this game is that we are extremely excited to host this team,” Volpe said. “They are currently number one in the country and playing at a very high-level right now.”

The Owls will be led by senior outside hitter Nicole Lennon, who was named the Conference USA Preseason Player of the Year, as well as junior setter Carly Graham and junior middle blocker Anota Adekunle, who were both first team all-conference selections a season ago.

Texas, meanwhile, is led by last year’s first team All-Americans junior Logan Eggleston and senior Brionne Butler. In their eight games this season, they have dropped only four sets.

The Owls have certainly faced their fair share of quality talent this year, but as expected, playing the No. 1 ranked team is a little different. While every game is important, Volpe said that this game will naturally carry more weight not only for the team and university, but nationally.

“Playing Texas is always a huge opportunity, and the fact that they are ranked No. 1 in the nation is meaningful and different from [other games],” Volpe said.  “Plus, the fact that we have won the last two outings with Texas certainly makes this a nationally interesting match.”

When the Owls upset the Longhorns back in 2019, they did so in front of a record-breaking home attendance of 3,012. After not allowing fans all of last season due to COVID-19 precautions, the Owls welcomed their fans back at the start of this year. On Wednesday, Volpe hopes that the energy created by the home crowd will have an impact on the game.

“Home court advantage can prove to be huge,” Volpe said. “We are hoping the student section does their job and rattles the Texas team. Our team really missed playing in front of our home crowd last year, so we would love to get a huge crowd for this one.”

Regardless of the current two-win streak against the burnt orange and white, Volpe said  that this game will be a challenge, but she feels confident in her team’s abilities.

“I think we have proven that we can compete with them and defeat them in the past,” Volpe said. “But the past does not define the present or the future and we completely  realize that.”

The match starts at 6:00 p.m. tonight at Tudor Fieldhouse.