Volleyball gets swept by No. 12 Baylor, sweeps McNeese state 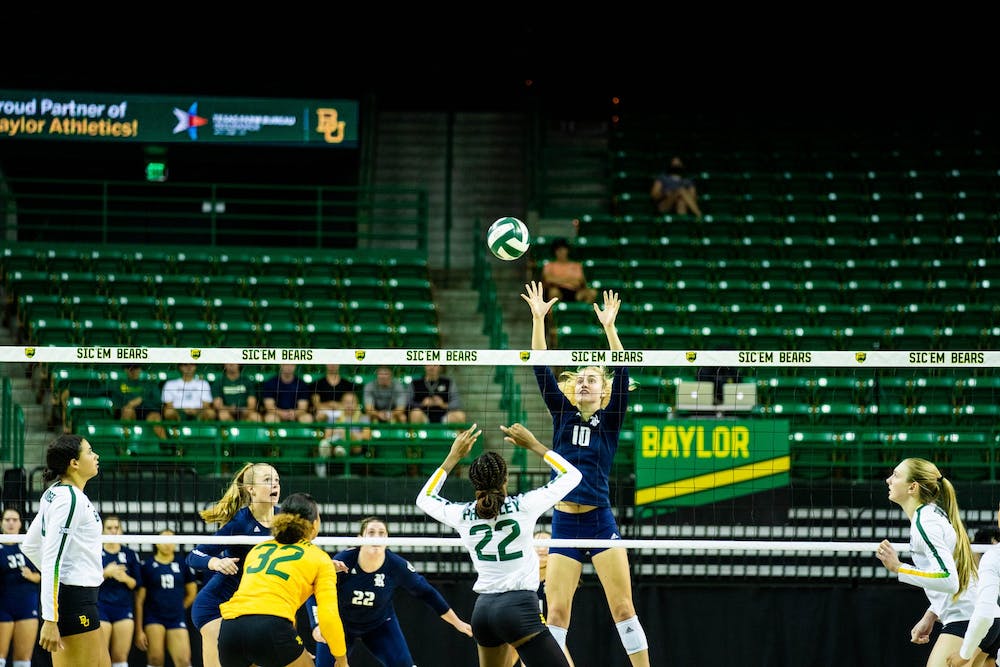 The Rice volleyball team traveled to Waco, TX this past weekend to compete in the Baylor Classic, where the Owls faced No. 12 Baylor University on Thursday evening and McNeese State University on Friday evening. Losing to the nationally-ranked Bears in straight sets on day one of the Classic, the Owls bounced back with a sweep over McNeese State on day two. After the weekend’s matches, the Owls are now 5-4 on the season with three of their losses coming to top-15 ranked teams.

Swept by the Bears, the Owls were held to low offensive numbers as they had a season-low in kills (32) and hitting percentage (0.114). Conversely, the Bears played strongly on the offensive side of the ball with a hitting percentage of 0.310. Head coach Genny Volpe believes that the Owls’ poor defensive performance allowed the Bears to win the game.

“Their offense was hard to stop because they were in-system way too much,” Volpe said.” I think if we had played cleaner defense and served tougher there could have been a different outcome.”

While she was disappointed by the game’s result, freshman outside hitter Sahara Maruska said the game against the Bears was an important learning experience against a top-ranked opponent and could help the team in the future.

“Although we lost to Baylor, I don’t see it as a loss,” Maruska said. “It was another learning moment and truly an opportunity for us to take a step back, reflect, and reinvest in our team to achieve some of the goals we have for the rest of the season.”

Volpe believes that the team’s discipline was critical in the team’s success against the Cowgirls.

“Against McNeese, the team was very focused and played clean volleyball, so we were able to execute and win the match in three straight sets,” Volpe said.

The weekend, though, was eye-opening for Volpe as it highlighted things that the team could work on in the future. Specifically, Volpe called for consistency and a more confident defensive effort by her squad.

“We need to be more efficient in [serving and receiving] and play a more confident style of defense,” Volpe said. “I felt like we bounced back and passed well against McNeese, but for the weekend, I wanted to see more consistency in execution overall.”

With the top-ranked team in the nation, the University of Texas, Austin, next on their schedule followed by the start of conference play, Volpe is taking the season one day at a time, hoping the team can improve as the season progresses.

“Ultimately we need to be more consistent in each aspect of our game and we will continue to focus on making small improvements along the way,” Volpe said. “We want to be peaking at the conference tournament and I believe our offense has far more potential than we have shown so far.”

After their game against Texas, the Owls will begin their conference schedule with a two game series against the University of North Texas. Last year, the Owls started the season with three non-conference losses before pulling off an undefeated conference regular season, a feat they will look to repeat this year. While the team is not off to its desired start, Maruska believes that great team chemistry can also lead the Owls to improve as the season continues.

“An area of improvement for us is believing that we are a great team with great coaches,” Maruska said. “If we can learn to consistently play with the utmost confidence in ourselves, we are unstoppable.”

Next up, the Owls will play in one of their biggest matches of the season as they face the No. 1  Longhorns at home in Tudor Fieldhouse tonight at 6:00 p.m.